Muhamed Ayad (born 19 February 1983), better known by his stage names Tony D or Tony Damager, is a German rapper of Lebanese descent. He was signed to Aggro Berlin but later changed to Sektenmuzik.

Ayad grew up in Berlin-Kreuzberg. At the age of ten he became interested in hip hop music. His favorite artists included Cypress Hill and Ice Cube. As "Drell One" he joined the crew Berlin Crime, where he found his identity as "Tony D, the Damager". Ayad's hip hop style is similar to Lil' Jon's style. Through rap artist MOK he came in contact with Sido and B-Tight.

Rapping is a musical form of vocal delivery that incorporates "rhyme, rhythmic speech, and street vernacular", which is performed or chanted in a variety of ways, usually over a backing beat or musical accompaniment. The components of rap include "content", "flow", and "delivery". Rap differs from spoken-word poetry in that it is usually performed off time to musical accompaniment. Rap being a primary ingredient of hip hop music, it is commonly associated with that genre in particular; however, the origins of rap predated for many years to hip-hop culture.

French hip hop is the hip hop music style developed in French-speaking countries. France is the second largest hip-hop market in the world after the United States.

Turkish hip hop refers to hip hop music produced by members of the Turkish minority in Germany, and to a lesser degree by hip hop artists in Turkey. The Turkish minority, called the Turks, first drew inspiration from the discrimination and racism they received while living as migrant workers in Germany in the 1960s. Turkish hip hop uses Arabesk music, a folk style that finds its roots in Turkey during the 1960s, and is influenced by the hip hop music of America and Germany. Album artwork, lyrical content, and the Turkish language are used by hip hop artists to express their uniquely Turkish identity.

Hip hop music has been popular in Africa since the early 1980s due to widespread African American influence. In 1985 hip hop reached Senegal, a French-speaking country in West Africa. Some of the first Senegalese rappers were M.C. Lida, M.C. Solaar, and Positive Black Soul.

Christian hip hop is a subgenre of hip hop music characterized by a Christian worldview, with the general purposes of evangelization, edifying some members of the church and/or simply entertaining. Christian hip hop music emerged from urban communities in the United States in the 1980s, when it existed almost exclusively in small underground scenes, with minimal formal industry promotion and little mainstream attention. It emphasizes the use of positive and uplifting messages to promote faith and belief.

Australian hip hop traces its origins to the early 1980s and is largely inspired by hip hop and other urban musical genres from the United States. As the form matured, Australian hip hop has become a commercially viable style of music that is no longer restricted to the creative underground, with artists such as The Kid Laroi, 1200 Techniques, Manu Crooks, Briggs, Baker Boy, Koolism, Hilltop Hoods and Bliss n Eso achieving notable fame. Australian hip-hop is still primarily released through independent record labels, which are often owned and operated by the artists themselves. Despite its genesis as an offshoot of American hip hop, Australian hip hop has developed a distinct personality that reflects its evolution as an Australian musical style.

Hip hop soul is a subgenre of contemporary R&B music, most popular during the early and mid 1990s, which fuses R&B, gospel or soul singing with hip hop musical production. The subgenre had evolved from a previous R&B subgenre, new jack swing, which had incorporated hip-hop influences into R&B music. By contrast, hip hop soul is, as described in The Encyclopedia of African American Music, "quite literally soul singing over hip hop grooves". 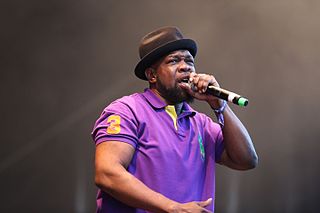 Kendrick Jeru Davis, known as Jeru the Damaja, is an American rapper and record producer. He is perhaps best known for his 1994 debut album, The Sun Rises in the East, ranked as one of the 100 greatest hip-hop albums of all time by the editors of About.com. He has worked extensively with Guru and DJ Premier of Gang Starr, whom he has known since he was in high school.

Paul Hartmut Würdig, better known as Sido, is a German rapper. He interprets his artist name as "super-intelligentes Drogenopfer". It used to stand for "Scheiße in dein Ohr", a line from his track Terroarr.

Midwest hip hop is a regional genre of hip hop music performed by artists from the Midwestern United States. In contrast with its East Coast, West Coast and Southern counterparts, Midwest hip hop has very few constants in style or production.

Northwest hip hop is hip hop or rap music that originates from the Pacific Northwest of North America, encompassing major cities such as Portland (Oregon), Seattle (Washington), Spokane (Washington), and Vancouver. Northwest hip hop music mixes elements from various genres of music to form a sound different from its southern neighbor, West Coast hip hop. For many years the scene existed mainly as an underground genre, but recently Northwest hip-hop has seen more and more mainstream acceptance, with artists such as Macklemore gaining nationwide attention.

Hip hop music, also known as rap music, is a genre of popular music developed in the United States by inner-city African Americans and Latino Americans in the Bronx borough of New York City in the 1970s. It consists of a stylized rhythmic music that commonly accompanies rapping, a rhythmic and rhyming speech that is chanted. It developed as part of hip hop culture, a subculture defined by four key stylistic elements: MCing/rapping, DJing/scratching with turntables, break dancing, and graffiti writing. Other elements include sampling beats or bass lines from records, and rhythmic beatboxing. While often used to refer solely to rapping, "hip hop" more properly denotes the practice of the entire subculture. The term hip hop music is sometimes used synonymously with the term rap music, though rapping is not a required component of hip hop music; the genre may also incorporate other elements of hip hop culture, including DJing, turntablism, scratching, beatboxing, and instrumental tracks.

Die Sekte is a German rap group from Berlin, formed in 1998 by Sido, B-Tight, Rhymin Simon and Vokalmatador. Originally it consisted of only Sido and B-Tight, also known as duo A.i.d.S. 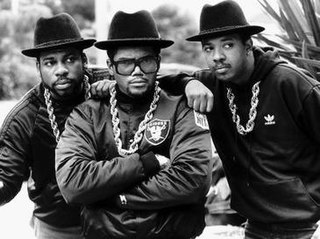 Run-DMC was an American hip hop group from Hollis, Queens, New York, founded in 1983 by Joseph Simmons, Darryl McDaniels, and Jason Mizell. Run-DMC is regarded as one of the most influential acts in the history of hip hop culture and one of the most famous hip hop acts of the 1980s. Along with Beastie Boys, LL Cool J and Public Enemy, the group pioneered new school hip hop music. The group was among the first to highlight the importance of the MC and DJ relationship.

Mumble rap is a loosely defined microgenre of hip hop that largely spread on the online audio distribution platform SoundCloud in the 2010s. The term implies a mumbling or unclear vocal delivery by artists, and may generally refer to rappers who do not share the genre's typical emphasis on lyricism.