He was selected for the 1968 British Lions tour to South Africa and played in three of the four international matches against South Africa.

He played club rugby for Blackheath.

Rhys Haydn Williams, born in Cwmllynfell, was a Welsh rugby union lock forward who gained 23 caps for Wales and ten consecutive caps for the British Lions. At club level he played primarily for Llanelli RFC, captaining them for a season. He also represented the Barbarians becoming the most capped Welsh representative of the club. In his later life he became a sports administrator, including the role of vice-president of the Welsh Rugby Union. Rugby historian John Griffiths described Williams as "the finest line-jumper in the world" and "the most accomplished British lock of the 1950s".

Fred Griffiths, also known by the nickname of "Punchy", was a Rhodesian professional rugby league footballer who played in the 1950s and 1960s, and coached in the 1960s. A South Africa international representative back, he played his club football in England for Wigan and in Australia for North Sydney, who he also captained and coached.

Michael "Mike" John Coulman is an English former rugby football footballer, and coach. He played at the highest levels in both rugby union and rugby league - a dual-code rugby international.

Peter Kidner Stagg is a former Scottish international rugby union player and the son of Sir James Stagg, the senior meteorologist adviser for Operation Overlord, the D-Day landings in Normandy. Peter Stagg was capped twenty-eight times as a lock for Scotland between 1965 and 1970, including one cap as a replacement.

William Keri Jones is a Welsh dual-code international rugby union, and professional rugby league footballer who played in the 1960s and 1970s. He played representative level rugby union (RU) for Wales, and at club level for Cardiff RFC, as a Wing, i.e. number 11 or 14, and representative level rugby league (RL) for Great Britain, and at club level for Wigan, as a wing, i.e. number 2 or 5.

Fred Leonard Perrett was a Welsh international rugby union prop who played club rugby for Neath. He won five caps for Wales, and in his first international game faced the touring South Africans.

Dr Ronald Cove-Smith was a distinguished English physician and sportsman. He represented Old Merchant Taylors and King's College Hospital RFC. Internationally he represented the England national rugby union team in 29 tests (1921–1929) and also captained the British Isles in four tests on the 1924 British Lions tour to South Africa as a lock. He finished on the winning side in 22 of his 29 England matches. He was commissioned in the Grenadier Guards in 1918–1919. In addition to rugby he excelled at swimming and water-polo, winning half-blues in each. 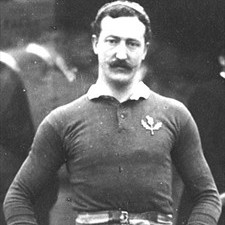 John "Johnny" Hammond was an English rugby union forward who, although not capped for England, was part of three British Lions tours, all to South Africa. He gained three caps during the 1891 tour to South Africa and captained the 1896 tour, winning another two test caps. Although not part of the 1899 tour to Australia, he was made the manager of the 1903 tour. Despite captaining the British Isles, Hammond never represented England.

Paul Robert Clauss was a German-born rugby union three-quarter who played club rugby for Oxford and Birkenhead Park. Clauss was a member of the first official British Isles tour in 1891 and also represented Scotland on six occasions. He was part of two Triple Crown winning teams for Scotland, and made an impressive international start in the 1891 Championship, scoring in all three Scotland games.

Aloysius Mary "Louis" Magee was an Irish rugby union halfback. Magee played club rugby for Bective Rangers and London Irish and played international rugby for Ireland and was part of the British Isles team in their 1896 tour of South Africa.

Samuel Walker was an Irish rugby union prop. Walker played club rugby for Instonians and played international rugby for Ireland and was captain of the British Isles team in their 1938 tour of South Africa.

Charles Henry "Cherry" Pillman was an English rugby union international who played on 18 occasions for his country and was part of the first official British Isles team that toured South Africa in 1910. He played club rugby with Blackheath and county rugby for Kent. Pillman's speed and tactics made him one of the leading exponents of an attacking wing forward, now recognised as the flanker position.