Tony Jewell may refer to: 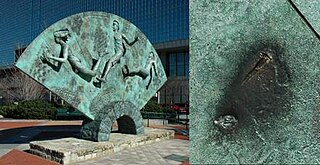 The Centennial Olympic Park bombing was a domestic terrorist pipe bombing attack on Centennial Olympic Park in Atlanta, Georgia, on July 27 during the 1996 Summer Olympics. The blast directly killed 1 person and injured 111 others; another person later died of a heart attack. It was the first of four bombings committed by Eric Rudolph. Security guard Richard Jewell discovered the bomb before detonation and cleared most of the spectators out of the park. Rudolph, a carpenter, and handyman, detonated three pipe bombs inside a U.S. military ALICE back pack. 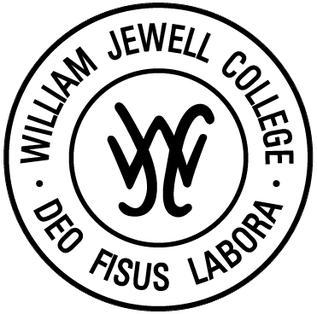 William Jewell College is a private liberal arts college in Liberty, Missouri. It was founded in 1849 by members of the Missouri Baptist Convention and endowed with $10,000 by William Jewell. It was associated with the Missouri Baptist Convention for over 150 years until its separation in 2003 and is now an independent institution. The college enrolls under 800 students and is accredited by the Higher Learning Commission. 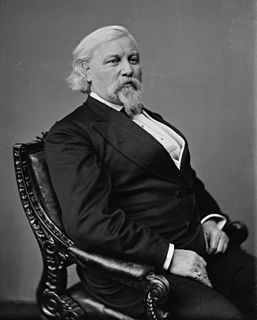 Marshall Jewell was a manufacturer, pioneer telegrapher, telephone entrepreneur, world traveler, and political figure who served as 44th and 46th Governor of Connecticut, the U.S. Minister to Russia, the 25th United States Postmaster General, and Republican Party National Chairman. Jewell, distinguished for his fine "china" skin, grey eyes, and white eyebrows, was popularly known as the "Porcelain Man". As Postmaster General, Jewell made reforms and was intent on cleaning up the Postal Service from internal corruption and profiteering. Postmaster Jewell helped Secretary of the Treasury Benjamin H. Bristow shut down and prosecute the Whiskey Ring. President Grant, however, became suspicious of Jewell's loyalty after Jewell fired a Boston postmaster over non payment of a surety bond and asked for his resignation.

Paul Jewell is an English football manager and former player. His last position was as an assistant coach at West Bromwich Albion, to which he was appointed in January 2015, but from which he resigned after only one week. 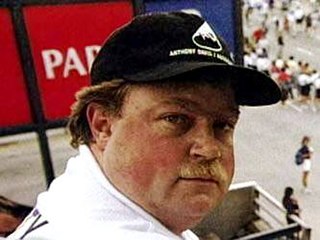 Richard Allensworth Jewell was an American security guard and police officer famous for his role in the events surrounding the Centennial Olympic Park bombing at the 1996 Summer Olympics in Atlanta, Georgia. While working as a security guard for AT&T, in connection with the Olympics, he discovered a backpack containing three pipe bombs on the park grounds. Jewell alerted police and helped evacuate the area before the bomb exploded, saving many people from injury or death. Initially hailed by the media as a hero, Jewell was later considered a suspect, before ultimately being cleared.

Nicholas "Nick" Jewell is a former Australian rules footballer and a professional cricketer who played for Victoria.

Tony 'TJ' Jewell is a former Australian rules football player who played in the VFL between 1964 and 1970 for the Richmond Football Club. He was recruited from Oakleigh in the VFA where he had led the club's goalkicking in 1962 and was placed 4th in the VFA's best & fairest award, the J. J. Liston Trophy, in 1963. His initial coaching experience after leaving Richmond was with Caulfield then in the second division of VFA. He led them to the 2nd division premiership and promotion to the top division in 1973. He was senior coach of Richmond from 1979 to 1981, which included winning the 1980 premiership, but was sacked to make way for Francis Bourke. He later returned to coach the club from 1986 to 1987. He was also senior coach of St Kilda in 1983 and 1984.

Jimmy Jewell born Arthur James Jewell and also known as AJ Jewell was an English association football manager and referee who during his career coached Norwich City in 1939.

The 1980 VFL Grand Final was an Australian rules football game contested between the Richmond Football Club and Collingwood Football Club, held at the Melbourne Cricket Ground in Melbourne on 27 September 1980. It was the 84th annual Grand Final of the Victorian Football League, staged to determine the premiers for the 1980 VFL season. The match, attended by 113,461 spectators, was won by Richmond by a margin of 81 points, marking that club's 10th premiership victory.

Luke Thomas Hyam is an English footballer who plays for Southend United. He plays as a midfielder and he is a product of Ipswich's youth academy, he made his professional debut for Ipswich in August 2010. Hyam left Ipswich Town after 15 years at the club on Wednesday 9 May 2018. On 2nd 2018 July it was announced that Hyam had Signed for The Shrimpers

The Benedictine Ravens are the official sports teams of Benedictine College located in Atchison, Kansas. They participate in the NAIA and in the Heart of America Athletic Conference (HAAC).

The Women in His Life is a 1933 American pre-Code crime film directed by George B. Seitz and starring Otto Kruger.

Sarah Margaret "Sally" Roffey Jewell is a British-American businessperson who served as the 51st United States Secretary of the Interior in the administration of President Barack Obama from 2013 to 2017.

Jewell is an English surname, from a Celtic personal name composed of elements meaning ‘lord’ + ‘generous’, ‘bountiful’. The name does not derive from the homophone “jewel.”

Josey Jewell is an American football linebacker for the Denver Broncos of the National Football League (NFL). He played college football at Iowa.

This article refers to the 2019 Clint Eastwood film. For the security guard and police officer, see Richard Jewell.