Tony Kendall may refer to:

Phillip Dennis Ivey Jr. is an American professional poker player who has won ten World Series of Poker bracelets, one World Poker Tour title, and appeared at nine World Poker Tour final tables. Ivey was at one time regarded by numerous poker observers and contemporaries as the best all-around player in the world. In 2017, he was elected to the Poker Hall of Fame. 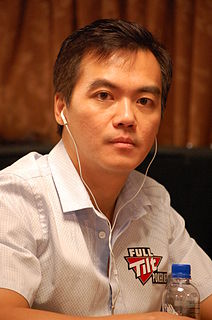 Scott Fischman is an American professional poker player based in Las Vegas, Nevada.

Antanas Guoga, more commonly known as Tony G, is a Lithuanian businessman, poker player, politician and philanthropist. During 2014–2019 he was a Member of the European Parliament for the Liberal Movement, and from 2016 European Peoples Party. In May 2016, Guoga was the temporary leader of the Liberal Movement following the bribery scandal that prompted Eligijus Masiulis to step down after potentially corrupt activities.

Anthony Guy Cascarino is a former footballer who played as a forward for various British and French clubs and internationally for the Republic of Ireland national team, with whom he competed in UEFA Euro 1988 and two World Cups in 1990 and 1994.

The Poker Million has been a televised European poker tournament since its inception in November 2000. The final debuted to 30 million viewers and has since remained popular. It was created by UK gaming outfit Ladbrokes with the help of sports promotion firm Matchroom Sport. In 2009 sponsorship was transferred from Ladbrokes to Full Tilt Poker, which produced Poker Million VIII.

Poker Night Live was the United Kingdom's first live Internet poker show, broadcast between 2005 and 2007 on Pokerzone, usually between 9pm and 1am. Versions of it have been broadcast worldwide. 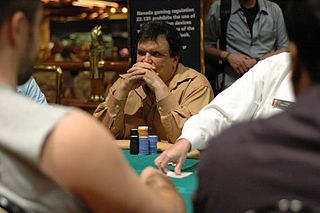 John Anthony Cernuto also known as Miami, is an American professional poker player based in Las Vegas, Nevada, specialising in Omaha hi-lo events. Cernuto has won over $5,500,000 in live tournament winnings, his largest score was for $259,150 from his $2,000 No Limit Hold'em bracelet victory in the 1997 World Series of Poker.

"The Happy Wanderer" is the 19th episode of the HBO original series The Sopranos and the sixth of the show's second season. It was written by Frank Renzulli, directed by John Patterson, and originally aired on February 20, 2000.

Rafael "Ralph" Perry is a professional poker player originally from Russia. He has been playing professionally since 1992.

John Hennigan may refer to:

The Amateur Poker Association & Tour (APAT) is an organisation founded in 2006 and is Europe's largest organisation for recreational poker players, with a membership of over 20,000 players.

Anthony "Tony" Gregg is an American professional poker player best known for winning the $111,111 One Drop High Roller in 2013 for a prize of $4,830,000. He is also known for his great successes at the PCA where he has made a record three appearances at the main event final table before anybody else has made the final table on two occasions. Despite making the final table three times he has not won a main event falling short and finishing 2nd on two of the three occasions and finishing sixth at the other final table. During his career he has racked up a total of over $10 million in live tournament cashes and is currently the 34th highest earner of all time in live tournament poker. 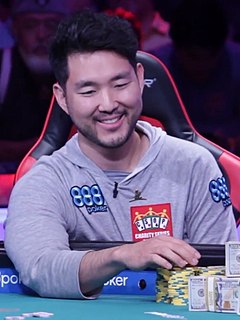 John Cynn is an American professional poker player from Northbrook, Illinois. In 2018, he won the World Series of Poker (WSOP) Main Event for $8,800,000.