Anthony C. Paige (born September 11, 1953) is an American radio talk show host and boxing commentator. Based in New York, Paige was an overnight host for WFAN. Save for a three-year stint where he was not working for the station, Paige had hosted programming on WFAN since 1995 until his retirement on September 14, 2019.

Tony Paige was born in the South Bronx and lived in the Forest Projects. Paige went to Taft High School, and then attended City College of New York and Florida A&M University. [1]

From January 1993 to December 1996, Paige served as president of the Boxing Writers Association of America. He was the first black man to hold that position in the 54-year history of the organization.

Paige started working at WFAN in 1995, hosting one night a week, then picking up extra shifts when he could. Then he left in 2000 to work for ESPN Radio New York and Duva Boxing before returning to WFAN in 2003 and staying for the rest of his career. [2] Paige primarily worked the overnight shift throughout his 16 year career at WFAN. He is the longest tenure for a overnight talker in station history. [3] Paige announced his retirement from WFAN on June 4, 2019, with his last show on September 14. [4] Paige ended his last broadcast by reminding people to never drink and drive, [5] which was a common reminder he said during shows throughout his career.

He is also a United States field producer for KOTV, a weekly boxing program based in London, England, that airs in 70 countries worldwide.

He has worked as a boxing broadcast journalist for ESPN, ESPN2, Showtime, SHOBOX, Prime Network, MSG Network, and SportsNet New York among various others.

Paige was diagnosed with cancer in 2018, which required kidney surgery. He had a quarter of his left kidney removed along with a three-centimeter cancerous tumor, [6] which caused him to take a leave from WFAN for a short time. He has said that health played no role in his decision to retire a year later. [7]

He is a Tampa Bay Buccaneers fan, a fact that many callers call attention to on his show. 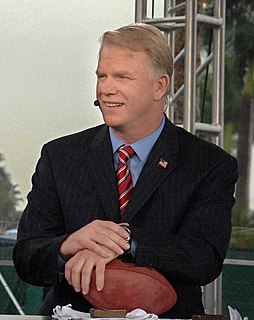 Norman Julius "Boomer" Esiason is a former American football quarterback and sports analyst who played in the National Football League (NFL) for 14 seasons, primarily with the Cincinnati Bengals. He was selected by the Bengals in the second round of the 1984 NFL Draft, where he spent 10 nonconsecutive seasons. Esiason was also a member of the New York Jets and Arizona Cardinals. To date, he is the last Bengals quarterback to lead the franchise to victory in the playoffs, doing so in 1990.

Around the Horn (ATH) is an American sports roundtable discussion show, conducted in the style of a panel game, produced by ESPN. The show premiered on November 4, 2002, as a replacement for Unscripted with Chris Connelly, and has aired daily at 5:00 p.m. ET on ESPN ever since. The show has been recorded in New York City since September 8, 2014, and has had over 2,500 episodes aired. The program emanated from Washington, D.C., where it was located in the same studio as Pardon the Interruption (PTI). The moderator for the show is Tony Reali, who has hosted the program since 2004, replacing Max Kellerman, and also served as the statistician on Pardon the Interruption until the show's relocation to New York.

WEPN, is an all-sports radio station licensed to New York City. The station is owned-and-operated by The Walt Disney Company and is the flagship station of the ESPN Radio network, primarily carrying the national network lineup. The station has its studios on the Upper West Side of Manhattan, and its transmitter site is located in North Bergen, New Jersey.

Chris Carlin, is an American television and radio personality. Previously, Carlin was the co-host of Carlin & Reese on local Philadelphia sports radio station 94.1 WIP. Carlin joined the station in November 2016, after over 8 years on SportsNet New York, the New York Mets television network. He was the co-host of "CMB," with Bart Scott & Maggie Gray on WFAN in New York from 2018-19. Recently, he joined 98.7 ESPN Radio in New York, where he hosts "Carlin at Night," daily from 7:00 - 10:00 PM.

Michael Patrick Francesa is an American sports radio talk show host. Together with Chris Russo, he launched Mike and the Mad Dog in 1989 on WFAN in New York City, which ran until 2008 and is one of the most successful sports-talk radio programs in American history.

Mike and the Mad Dog was an American radio show hosted by Mike Francesa and Christopher "Mad Dog" Russo, originally aired in afternoons on WFAN in New York City from September 1989 to August 2008. The show featured Francesa and Russo talking about sports and taking phone calls from listeners. From 2002 the show was simulcast on television on the YES Network. On the radio, the show was simulcast beginning 2007 on WQYK in Tampa, Florida and from 2004 until 2007 on WROW in Albany, New York.

Joseph S. Benigno is an American sports radio personality. He was a co-host of the Joe & Evan show with Evan Roberts weekdays from 2 p.m. to 6 p.m. ET on the New York radio stations WFAN-AM and WFAN-FM. His retirement was announced on October 28, 2020.

Daniel Thomas Le Batard is an American newspaper sportswriter, radio host, and television reporter based in Miami, Florida. He has also worked at ESPN, and for his hometown paper, the Miami Herald, for which he wrote from 1990 to 2016.

WTEM is a commercial sports radio station licensed to serve Washington, D.C. Owned by Urban One and operated by Entercom pending an outright sale, the station services the Washington metropolitan area as a co-flagship station for the Washington Football Team, by virtue of previously being owned by Redskins owner Daniel Snyder's Red Zebra Broadcasting. WTEM is also the market affiliate for the Baltimore Orioles Radio Network, the Maryland Terrapins and Fox Sports Radio, and the radio home of Steve Czaban, Brian Mitchell and Rick Walker. 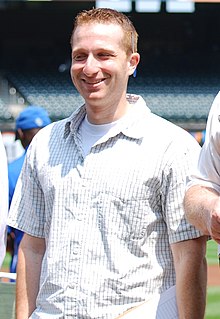 Evan Roberts is an American sports radio personality. He currently co-hosts the Carton and Roberts radio show, along with Craig Carton, weekdays from 2 p.m. to 7 p.m. ET on the New York radio stations WFAN-AM and WFAN-FM.

Jerry Recco is an American sports radio personality, serving as a morning anchor on Boomer and Gio program on sports radio station WFAN in New York City. He has been with the station since 1997. As of 2009, Recco also reports sports in the morning for WFAN's sister station all-news WINS. Born in Brooklyn and raised in New Jersey, Recco received a BA in Media Arts from Jersey City State College, after a 3-year stint at the now defunct Upsala College. He began his career at WFAN first as an intern and then moved up to producer and board operator, before taking over as the overnight anchor. He left WFAN for a short time to disc jockey at WHTG-FM in New Jersey and anchor sports at Sportsphone before returning in April 2000 as part-time anchor and full-time board operator for the Mike and the Mad Dog show. Recco is an avid golfer and Dallas Cowboys fan. 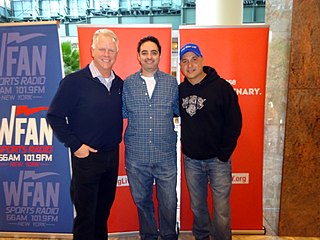 Craig Harris Carton is an American radio personality best known as the co-host of the Carton and Roberts sports radio program on WFAN (AM) in New York City. He was arrested in September 2017 on charges of securities fraud and wire fraud, before he re-signed with the station in October 2020 after his release from prison.

Damon Lawrence Amendolara is the morning host on the CBS Sports Radio Network, heard across North America. He was promoted to that time slot in March 2017. He previously worked as the evening host for WBZ-FM in Boston. He also acted as the sideline reporter for Major League Soccer telecast of the New England Revolution. He is a contributor to the NFL Network, MLB Network, NFL Films, SportsNet New York and WFAN radio in New York. The new CBS Sports Radio Network launched on January 2, 2013 with Amendolara as the overnight host, and is syndicated across CBS Sports Radio over 150 radio stations in the U.S. and Canada.

Mike's On: Francesa on the FAN was a sports radio talk show airing on New York City station WFAN, hosted by Mike Francesa. The show debuted on September 3, 2008, as the successor to Francesa's previous program, Mike and the Mad Dog, which was broadcast from 1989–2008 and made Francesa and his partner Chris Russo the first nationally known team in sports radio. When simulcast on television, Mike's On is broadcast under the title The Mike Francesa Show; it was simulcast on the YES Network from its inception until January 31, 2014. On March 24, 2014, Francesa signed an agreement to occasionally simulcast a portion of the show on Fox Sports 1 and Fox Sports 2. The arrangement with Fox Sports ended September 11, 2015 with Mike taking the blame for the project not succeeding. Francesa announced his retirement and the final show aired on December 15, 2017.

The New York Sports radio WFAN, first broadcast on July 1, 1987 at 1050AM replacing WHN. WFAN was the first all sports station in the United States. The station's current frequency, 660AM. was formerly known as WNBC and first transmitted on March 2, 1922. WFAN moved to 660AM at 5:30PM Eastern Time on October 7, 1988 when WNBC signed off for the last time.

Ryan P. Ruocco is a New York Emmy award-winning American television and radio sportscaster. He serves as a play-by-play announcer for the NBA and WNBA on ESPN, the New York Yankees and Brooklyn Nets on YES Network, and boxing for DAZN. He hosts the podcast R2C2 with former Yankees all-star pitcher CC Sabathia on Bill Simmons’ sports podcast network The Ringer on Spotify. He previously hosted the Stephen A. Smith & Ryan Ruocco Show on ESPN Radio 98.7 FM.