Tony Stone may refer to one of the following people:

Stoats is a British company which sells porridge and other oat based products based in Edinburgh, Scotland. Stoats was founded in 2005 and retails in most British supermarkets with distribution across the world including Europe, Asia and UAE.

Tony Stone is an American independent filmmaker. His notable works include the music video for R.E.M.'s "It Happened Today" (cinematography), and the films Severed Ways, Out of Our Minds and the 2016 documentary Peter and the Farm (director).

Tony Stone is an American music producer and project developer for Christian hip hop artists. He has produced the music to hundreds of songs in the genre. He is currently the Project Manager for Reflection Music Group. 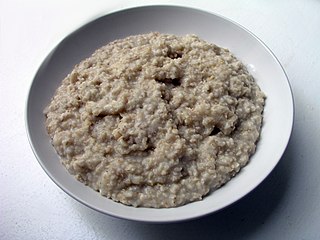 Porridge is a food commonly eaten as a breakfast cereal dish, made by boiling ground, crushed or chopped starchy plants—typically grain—in water or milk. It is often cooked or served with added flavorings such as sugar, honey, fruit or syrup to make a sweet cereal or mixed with spices or vegetables to make a savoury dish. It is usually served hot in a bowl. 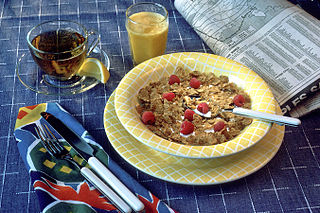 Breakfast cereal is a breakfast food made from processed cereal grains and often eaten for breakfast, primarily in Western societies. It is most often mixed with milk, but can also be eaten with yogurt or fruit. Some companies promote their products for the health benefits from eating oat-based and high-fiber cereals. In the United States, cereals are often fortified with vitamins but can also lack many of the vitamins needed for a healthy breakfast. A significant proportion of cereals are made with high sugar content. Many breakfast cereals are produced via extrusion. The breakfast cereal industry has gross profit margins of 40–45%, 90% penetration in some markets, and steady and continued growth throughout its history. The number of different types of breakfast cereals in the U.S. has grown from 160 (1970) to 340 (1998); forecasted trend for 2012 was 4,945 (2012). In this highly competitive market, breakfast cereal companies have developed cereals in an ever-increasing number of flavors. Although many plain wheat and oat based cereals exist, other flavors are sweet. Some of the most popular brands include freeze-dried fruit and others are flavored like dessert or candy.

Cynthia Ann Stephanie Lauper is an American singer, songwriter, actress and activist. Her career has spanned over 40 years. Her album She's So Unusual (1983) was the first debut album by a female artist to achieve four top-five hits on the Billboard Hot 100—"Girls Just Want to Have Fun", "Time After Time", "She Bop", and "All Through the Night"—and earned Lauper the Best New Artist award at the 27th Grammy Awards in 1985. Her success continued with the soundtrack for the motion picture The Goonies and her second record True Colors (1986). This album included the number one single "True Colors" and "Change of Heart", which peaked at number three. 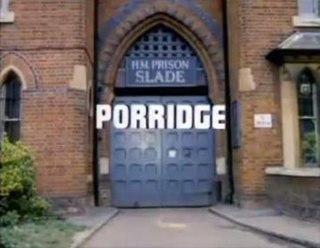 Porridge is a British sitcom, starring Ronnie Barker and Richard Beckinsale, written by Dick Clement and Ian La Frenais, and broadcast on BBC1 from 1974 to 1977. The programme ran for three series, and included two Christmas specials and a feature film of the same name.

Anthony Schmalz "Tony" Conrad was an American avant-garde video artist, experimental filmmaker, musician, composer, sound artist, teacher, and writer. Active in a variety of media since the early 1960s, he was a pioneer of both structural film and drone music. He performed and collaborated with a wide range of artists over the course of his career, most prominently the 1960s New York experimental music group Theatre of Eternal Music.

Anthony Edward Visconti is an American record producer, musician and singer. Since the late 1960s, he has worked with an array of performers. His lengthiest involvement was with David Bowie: intermittently from Bowie's second album in 1969 to the 2016 release Blackstar, Visconti produced and occasionally performed on many of Bowie's albums. Visconti's work on Blackstar was cited in its Grammy Award for Best Engineered Album, Non-Classical and his production of Angelique Kidjo's Djin Djin was cited in its Grammy Award for Best Contemporary World Music Album. 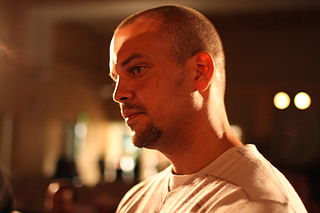 Quincy Delight Jones III is a Swedish-American music producer, film producer, and author. He was a jury member of Swedish Idol 2016.

Tony Osoba is a Scottish actor best known for his role as Jim 'Jock' McClaren in the popular 1970s British sitcom Porridge. He also appeared in its sequel Going Straight. Osoba was the first black Scottish actor to appear on primetime television when he appeared in the series.

Swartz is a German surname related to the German word schwartz. It may refer to:

Duets: An American Classic is a studio album by Tony Bennett, released in 2006 via Columbia label.

Anthony or Tony Clarke may refer to:

An auteur is an artist, usually a film director, who applies a highly centralized and subjective control to many aspects of a collaborative creative work; in other words, a person equivalent to an author of a novel or a play. The term is commonly referenced to filmmakers or directors with a recognizable style or thematic preoccupation.

Porridge & Hotsauce is the tenth studio album by the Australian rock band You Am I. It was released on 6 November 2015.