Trahar was educated at St John's College and the University of the Witwatersrand, after which he qualified as a chartered accountant.

Gavin Relly was a South African businessman and former chairman of Anglo American. His grandfather was Sir Walter Stanford, who argued strongly but unsuccessfully for enfranchisement for Native Peoples regardless of race or colour at the National Convention of 1909, which led to the Union of South Africa.

Julian Ogilvie Thompson is a South African businessman and former chairman of De Beers and the Anglo American mining company.

Trahar stepped down as chairman and CEO in 2007, succeeded by Cynthia Carroll.

Cynthia Blum Carroll is a British businesswoman. She was the chief executive officer of Anglo American PLC, a British mining company, which, among other things, is the world's largest platinum producer. 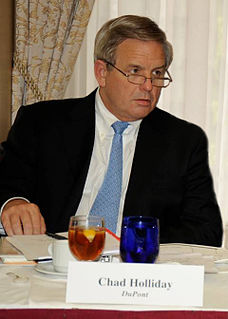 Charles Otis "Chad" Holliday, Jr. is an American businessman, former chairman of Bank of America and former chairman, former chief executive officer and a former director of E. I. du Pont de Nemours and Company (DuPont). He is chairman emeritus of the U.S. Council on Competitiveness and chairman of the Business Roundtable's Task Force for Environment, Technology and Economy. Holliday is also a founding member of the International Business Council and serves on the board of advisors of the Nicholas Institute for Environmental Policy Solutions.

Nicholas F. Oppenheimer is a South African billionaire businessman and philanthropist. He was formerly the chairman of De Beers diamond mining company and of its subsidiary, the Diamond Trading Company, and former deputy chairman of Anglo American. He is the third richest African.

Anglo American plc is a multinational mining company based in Johannesburg, South Africa and London, United Kingdom. It is the world's largest producer of platinum, with around 40% of world output, as well as being a major producer of diamonds, copper, nickel, iron ore and metallurgical and thermal coal. The company has operations in Africa, Asia, Australasia, Europe, North America and South America.

John Wendell Thompson is the chairman of Microsoft. He is a former CEO at Virtual Instruments, a vice-president at IBM and the former chief executive officer (CEO) of Symantec. Thompson later became an independent director on the board of Microsoft, and on February 4, 2014, he was named the chairman of the board. He led the search for Microsoft's next CEO; as a result, Satya Nadella was selected.

Kenneth Irvine Chenault is an American business executive. He was the CEO and Chairman of American Express from 2001 until 2018. He is the third African American CEO of a Fortune 500 company.

AngloGold Ashanti Limited is a global gold mining company. It was formed in 2004 by the merger of AngloGold and the Ashanti Goldfields Corporation.

Mangosuthu University of Technology (MUT) is a University of Technology situated on the outskirts of Durban, South Africa, on a site overlooking the Indian Ocean. MUT is located in the academic hub in the eThekwini metropole, a dynamic growing economy, focused for future growth. It is a residential university, largely serving previously disadvantaged communities with a strategic intent to educate and empower students and communities, and address pressing transformation and multicultural issues facing South Africa.

Sir Mark Moody-Stuart KCMG is a British businessman, He was appointed non-executive chairman of Anglo American PLC in 2001, serving until 2009. He has been chairman of Hermes Equity Ownership Services since 2009.

Marius Jacques Kloppers is a South African-born Australian businessman and former CEO of BHP Billiton, the world's largest mining company. He was also Executive Director and Chairman of the Group Management Committee from 2007 to 2013. He was asked to retire as CEO on 1 October 2013, and was succeeded by Andrew Mackenzie.

Lawrence W. "Larry" Kellner is the former CEO of Continental Airlines, having succeeded Gordon Bethune as CEO in December 2004. Prior to his arrival at Continental, he served as the chief financial officer of American Savings Bank. Kellner retired as the airline's chief executive at the end of December 2009. During his career at Continental, he previously served as a vice president, chief financial officer and chief operating officer.

Sir Winfried Franz Wilhelm "Win" Bischoff is an Anglo-German banker and former chairman of Lloyds Banking Group. He previously served as chairman and interim CEO of Citigroup in 2007. He was succeeded as CEO by Vikram Pandit on 11 December 2007. Bischoff stepped down as chairman on 23 February 2009 and was replaced by Richard Parsons. He has dual British and German citizenship. Bischoff was knighted in 2000.

James Alan Skinner is an American business executive. He is the executive chairman of Walgreens Boots Alliance. He was the vice chairman and CEO of McDonald's Corporation.

Aquarius Platinum plc is a Bermuda-registered and headquartered mining business.

Richard M. Rompala is an American executive currently on the board of directors of the Olin Corporation. He was chairman of Valspar from February 1998 until his retirement in July 2005. He had previously served as both CEO and president of Valspar. Rompala's leadership is credited with significantly expanding Valspar's international business operations, where it had previously been a primarily North American business.

Robert Michael "Bobby" Godsell is a retired South African businessman and the former CEO of South African gold mining company AngloGold Ashanti, a position he held from 1998 to 2007. He was the Non-Executive Chairman of Eskom from 2008 to 2009 and was appointed to the National Planning Commission of South Africa by former South African President Jacob Zuma on 30 April 2010.

John Patrick Phizackerley is a British banker, and was the CEO of TP ICAP, an inter-dealer money broker and FTSE 250 Index company with offices in 24 countries.