Toovey is a surname. Notable people with the surname include:

Shawn Toovey is an American actor. He is best known for his role as Brian Cooper in the popular drama Dr. Quinn, Medicine Woman for which Toovey won four Young Artist Awards. 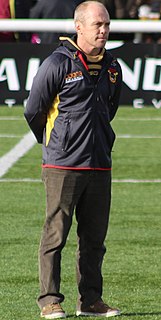 Geoffrey "Geoff" Toovey, also known by the nickname of "Toovs" or "Tooves", is the former head coach of the Bradford Bulls and former professional rugby league footballer. Toovey played halfback for the Manly-Warringah Sea Eagles, then played as a hooker later in his career at the Northern Eagles. He played 286 first-grade matches in all, and captained Manly to the 1996 ARL premiership and the 1995 and 1997 grand finals. He played in 13 international matches for Australia between 1991 and 1998. Toovey is the former head coach of Manly-Warringah.

Anthony Watmough is an Australian former professional rugby league footballer. An Australian international and New South Wales State of Origin representative forward, he played the majority of his career with the Manly-Warringah Sea Eagles, winning both the 2008 NRL Premiership and the 2011 NRL Premiership with them.

Alan Toovey is a former professional Australian rules footballer who played with the Collingwood Football Club in the Australian Football League (AFL).

Brent Macaffer is a former professional Australian rules footballer who played for the Collingwood Football Club in the Australian Football League (AFL). He was recruited in the 2006 AFL draft.

The 1999 State of Origin series saw the 18th year that the annual three-game series between the Queensland and New South Wales representative rugby league football teams was contested entirely under 'state of origin' selection rules. The series was drawn and the shield retained by the previous year's victors, Queensland. Each team claimed victory in a game and the deciding fixture finished at 10-all. It was the first series to end in a draw.

The Woman in Black is a 1989 British television horror film directed by Herbert Wise and starring Adrian Rawlins, Bernard Hepton, David Daker and Pauline Moran. The teleplay is adapted from the 1983 novel of the same name by Susan Hill. It focuses on a young solicitor who is sent to a coastal English village to settle the estate of a reclusive widow, and finds the town haunted.

Geoffrey is a French and English masculine given name. It is the Anglo-Norman form of the Germanic compound *gudą 'god' and *friþuz 'peace'. It is a cognate of Dutch Godfried and German Gottfried.

Dr Andrew Toovey is a classical composer, and recipient of composition awards including the Tippett Prize, Terra Nova Prize, the Bernard Shore Viola Composition Award and an RVW Trust Award. Two portrait CDs of his music were released on the Largo label in 1998, and many individual pieces are represented on others CD labels including NMC. His music is partially published by Boosey and Hawkes, and most of his output is available to view on YouTube on his own channel. There is an comprehensive website (www.andrewtoovey.co.uk) where all of Toovey's music can be seen in PDF format with a complete worklist, timeline outlining events of each year and performance list. He has worked extensively on education projects for Glyndebourne Opera, English National Opera, Huddersfield Festival, the South Bank Centre and the London Festival Orchestra, and has been composer-in-residence at Opera Factory and the South Bank Summer School. He is now a full-time composer, but used to teach part-time at Bishop Ramsey School, Ruislip, Middlesex and Alperton Community School in Wembley. He currently teaches composition at the Royal Birmingham Conservatoire part of BCU.

The Portia Geach Memorial Award is an annual prize for Australian female portraitists. The Award was established in 1961 as a testamentary trust by Florence Kate Geach, sister of Australian painter Portia Geach, with an initial endowment of AU£12,000. The first prize given under the aegis of the Award was made in 1965, comprising a £1,000 prize to Jean Appleton for a self-portrait. In 2015, the Award was worth A$30,000. 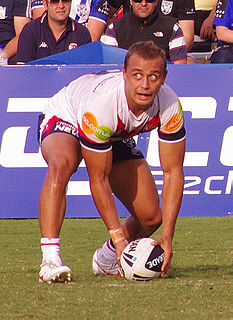 Ernest Albert Toovey MBE, OAM was an Australian cricketer and baseball player. In cricket, Toovey was a left-handed batsman who bowled slow left-arm orthodox. He was born at Warwick, Queensland.

The 2012 Manly Warringah Sea Eagles season was the 63rd in the club's history. Coached by Geoff Toovey and co-captained by Jamie Lyon and Jason King, they competed in the National Rugby League's 2012 Telstra Premiership, finishing the regular season 4th. Having made their eighth consecutive finals series, the Sea Eagles then came to within one match of the 2012 NRL Grand Final but lost to eventual premiers the Melbourne Storm.

Claude Henry St Leonard Toovey was an Australian rules footballer who played with Fitzroy in the Victorian Football League (VFL).

The 1996 Manly Warringah Sea Eagles season was the 50th in the club's history since their entry into the then New South Wales Rugby Football League premiership in 1947.

Norse invaders ruled much of northern England, in the 9th and 10th centuries, and left English surnames of Danish origin in the area now called the Danelaw.

Sports Sunday is an Australian sports television program currently broadcast on the Nine Network at 10.00am Sunday mornings. It is hosted by James Bracey, with a roster of rotating panelists including author Peter FitzSimons, journalist Neil Breen, Australian netball player Liz Ellis and horse trainer Richard Freedman. Emma Freedman hosted the show for its debut season in 2017.