Topographical features within the Phitsanulok Province of Thailand include the Phetchabun Mountains, the Nan River and several of its tributaries, waterfalls, swamps, forests, grasslands, caves, a reservoir and an extensive network of canals. Populated areas of the province are largely cleared of natural vegetation and adapted for farming. The land in the province is in the Greater Nan Basin, which is part of the Chao Phraya Watershed. The province includes land within both of the greater Nan basin's sub-basins, i.e., the Nan Basin and Yom Basin. [1] The provincial capital of Phitsanulok is sometimes called Song Kwae, the "city of two rivers", an ancient name dating to a time centuries ago when the Nan and Khwae Noi Rivers met near the city. These two rivers of the Phitsanulok Province are still of major significance to the residents of the region. 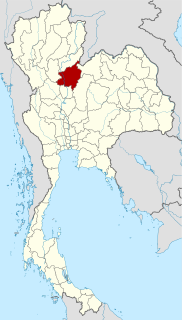 Phitsanulok, one of Thailand's seventy-six provinces, lies in upper central Thailand, borders Sukhothai and Uttaradit on the north, Loei and Phetchabun in the east, and Phichit and Kamphaeng Phet to the south. In the northeast borders Laos.

The Phetchabun mountains are a mountain massif in Phetchabun, Phitsanulok, Loei and Chaiyaphum Provinces, Thailand. It consists of two parallel mountain chains, with the valley of the Pa Sak River in the middle.

The Phetchabun Mountains run through the province, and provide the source of several of the rivers and streams flowing through the region.

There are a substantial number of caves located within the province. [2]

There are several natural meadows or thung preserved in the province's Thung Salaeng Luang National Park. [3]

The majority of inhabited lands in Phitsanulok (i.e., outside the national parks) have been largely cleared of their natural vegetation and adapted for agricultural use, primarily rice farming. As a result, several of the indigenous species of plant life in the region have become endangered.

The principal rivers that flow through the province belong to the Nan River System. The following tree indicates the positions of the province's rivers in the Nan tributary tree:

The Nan River is a river in Thailand. It is one of the most important tributaries of the Chao Phraya River.

At least nine waterfalls or namtok lie within the borders of the province:

Most rapids in the province are on the Wang Thong River. Kaeng Wang Nam Yen Rapids lie within Thung Salaeng Luang National Park.

The farming industry of Phitsanulok is supported by an extensive network of irrigation canals called khlong , which connect the farms to the Nan River and its tributaries.

There are a number of swamps or bueng in Phitsanulok province. The most significant of these swamps are: 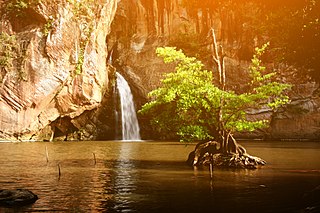 Wat Bot is a district (amphoe) in the northern part of Phitsanulok Province, central Thailand.

Nakhon Thai is a district (amphoe) in the eastern part of Phitsanulok Province, central Thailand. 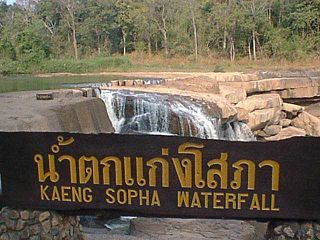 Namtok Kaeng Sopha is a waterfall and tourist attraction in Wang Thong district of Phitsanulok Province in Thailand. Situated in Thung Salaeng Luang National Park on the Wang Thong River off of Lomsak Road, between kilometers 71 and 72, it is the largest waterfall in Phitsanulok. Kaeng Sopha is a tiered waterfall, shaped like a stairway, and it has been dubbed the Niagara Falls of Thailand. The torrents are very strong in the rainy season. The vapor rising in the area creates a vast rain-like curtain. There are no concessions sold in the park. Kaeng Sopha is the subject of a June, 2007 postage stamp in Thailand in the Thailand Waterfall series.

The Wang Thong River is a river in Thailand. Its source lies in the Phetchabun Mountains in the Khao Kho District, Thailand. It flows through Thung Salaeng Luang National Park and forms Namtok Sri Dit and Namtok Kaeng Sopha in the Wang Thong District of Phitsanulok Province, and finally flows through into the Bang Krathum District, passing through Ban Sam Ruen and on to the border of Phitsanulok and Phichit, where it drains into the Nan River at 16°31′06″N100°19′36″E. The land drained by the Wang Thong River is part of the Nan Basin and the Chao Phraya Watershed.

The Khwae Noi River is a river in northern Thailand. It shares the same name as another river in Thailand, the popular tourist attraction also known as "The River Kwai." These are two distinct bodies of water. 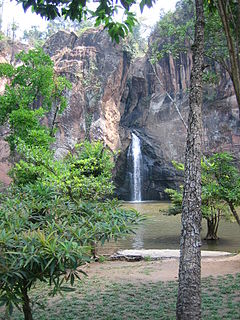 Namtok Chat Trakan National Park is a national park located in Phitsanulok Province of Thailand, established in 1987. It encompasses a substantial portion of Amphoe Chat Trakan.

Kaeng Sopha is a subdistrict in the Wang Thong District of Phitsanulok Province, Thailand.

Ban Pa is a subdistrict in the Mueang Phitsanulok District of Phitsanulok Province, Thailand.

Makham Sung is a subdistrict in the Mueang Phitsanulok District of Phitsanulok Province, Thailand.

The lands situated in the present-day Phitsanulok Province of Thailand have been inhabited since the stone age, although the neolithic inhabitants of the region are not likely to have been the ancestors of the modern Thai people who reside there today. The earliest historical records relating to what is now Phitsanulok Province indicates that at a time prior to or during the 11th century, the present-day city of Phitsanulok was but a small strategic Khmer outpost known as Song Khwae. During the next century, in 1188, Nakhon Thai, located near the center of the present Phitsanulok Province, was established as the capital city of the Singhanavati Kingdom, an early city-state of Thailand. Later, during Thailand's Sukhothai Period, the city of Phitsanulok emerged as a major city in the east of the Sukhothai Kingdom, and the great temples of Wat Chula Manee, Wat Aranyik and Wat Chedi Yod Thong were constructed. In 1357, the renowned Wat Phra Sri Rattana Mahathat was erected, and the Ayutthaya Period witnessed the construction of several of the province's other chief temples. Phitsanulok served for 25 years as the capital city of the Ayutthaya Kingdom. In 1555, King Naresuan the Great was born in the city of Phitsanulok. Naresuan played a significant role in the history of Thailand, as he expanded the kingdom to its greatest territorial extent, by conquering sizable portions of modern-day Burma and Cambodia. In recent times, Phitsanulok Province has become an important agricultural center, part of the Bread Basket of Thailand, providing rice and other crops to consumers in Thailand and throughout the world. Extensive agricultural development over the last hundred years or so has spawned a modern infrastructure in the urban areas of the province, bringing with it an array of modern roads, universities, hospitals and other conveniences. Over the years, the Nan River and its tributaries have played a substantial role in the history and development of the region by providing a route for transportation, fertile soil for agriculture, and water for irrigation. The river waters have also served as a route for enemy invaders, and have been the source of periodic widespread flooding throughout the province.