Last updated March 15, 2019
This article is about the name. For other uses, see Tore (disambiguation).

Tore is a Scandinavian masculine name. It is derived from the Old Norse name Thórir, which is composed of thorr which means thunder, and arr which means warrior. So Thunder Warrior or Thor's Warrior. The most famous person by this name is probably Tore Hund, who killed Olaf II of Norway at the Battle of Stiklestad. Approximately 18,000 people in Norway are named Tore. [1]

The Norse people or Norsemen were a group of Germanic people who inhabited Scandinavia and spoke what is now called the Old Norse language between c. 800 and 1300 AD. The language belongs to the North Germanic branch of the Indo-European languages and is the predecessor of the modern Germanic languages of Scandinavia. In the late eighth century Norsemen embarked on a massive expansion in all directions. This was the start of the Viking Age.

Thunder is the sound caused by lightning. Depending on the distance from and nature of the lightning, it can range from a sharp, loud crack to a long, low rumble (brontide). The sudden increase in pressure and temperature from lightning produces rapid expansion of the air surrounding and within a bolt of lightning. In turn, this expansion of air creates a sonic shock wave, similar to a sonic boom, often referred to as a "thunderclap" or "peal of thunder".

Tore Austad is a Norwegian politician for the Conservative Party. Born in Skedsmo, Akershus, he received a cand. philol. degree in 1962, and worked as a professor of Norwegian at the University of Chicago from 1964 to 1966. Returning to Norway he worked at various academic institutions, before being elected to the Storting from the county of Vest-Agder in 1977, where he sat for three periods, until 1989. 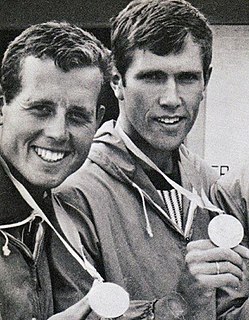 Tore Berger is a retired Norwegian sprint canoeist who mostly competed in four-man events. He won a world title in 1970, a European title in 1969, and an Olympic gold medal in 1968, placing third at the 1972 Games.

Tore Blom was a Swedish track and field athlete who competed at the 1900 Summer Olympics in Paris, France.

Nilsen is a surname of Norwegian origin, meaning "son of Nils". It refers to:

Werner is a name of Germanic origins. It is common both as a given name and a surname. There are alternate spellings, such as the Scandinavian Verner.

PedersenDanish pronunciation: [ˈpeðɐsn̩], is a Danish and Norwegian patronymic surname, literally meaning "son of Peder". It is the fourth most common surname in Denmark, shared by about 3.4% of the population. and the sixth most common in Norway. It is of similar origin as the surname Petersen.

Bertil is a first name of German origin most commonly found among Swedish men. The oldest recorded use is from the year 1396, but the name did not find widespread use until the 19th century.

Svein is a Norwegian masculine given name which may refer to:

Bjorn, Björn, Bjørn, Beorn or, rarely, Bjôrn, Biorn, or Latinized Biornus, Brum (Portuguese), is a Germanic male given name, or less often a surname. The name means "bear". In Finnish and Finland Swedish, sometimes also in Swedish, the nickname Nalle refers to Björn.

Edvard is a form of Edward and may refer to:

Kjetil is a Norwegian masculine given name. It may refer to:

Egil or Egill is a masculine given name derived from Old Norse. It may refer to: