Torkelsen and Torkelson are Norwegian and Danish patronymic surnames which may refer to:

Chester Leroy "Red" Torkelson, was a Major League Baseball pitcher who played in 1917 with the Cleveland Indians. He batted and threw right-handed. Torkelson had a 2-1 record, with a 7.66 ERA, in four games, in his one-year career. He was born and died in Chicago, Illinois. 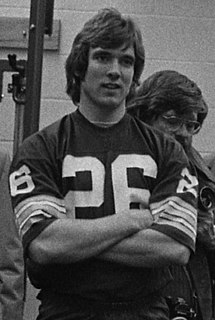 Eric Grove Torkelson is a former American football running back who played seven seasons for the Green Bay Packers of the National Football League from.

Paul M. Torkelson is a Minnesota politician and member of the Minnesota House of Representatives. A member of the Republican Party of Minnesota, he represents District 16B, which includes all or portions of Brown, Redwood and Renville counties in the southwestern part of the state. He is also a fourth-generation Watonwan County corn, soybean and pork farmer, with family roots in the area since 1878, and a former music teacher.

FollaCell is a paper mill located in Follafoss, Norway. The mill produces 130 000 tonnes of CTMP pulp per year, and is owned by Mayr-Melnhof.

Sven Aarrestad was a writer, politician and leader in the Norwegian temperance movement during the 19th century.

The Torkelsons is an American sitcom which aired on the NBC television network from September 21, 1991 to June 6, 1993. Produced by Walt Disney Television in season 1 and Touchstone Television in season 2, the series starred Connie Ray, Olivia Burnette, and William Schallert. For the second and final season, the series was retooled and renamed Almost Home. The series lasted a total of two seasons, consisting of 33 episodes.

Aaron Michael Metchik, also credited as Aaron Metchik, is an American actor, writer, and director, known for his role as Steven Floyd Torkelson on The Torkelsons.

Valen TV is a Norwegian TV-show created by Kristian Valen which was shown on TVNorge in 2003. The show consists of seven episodes, each lasting for about 25 minutes. The show is mainly parodies of Norwegian and international TV-shows and music videos. Kristian Valen plays all parts in the show himself, whether parodies of famous people in real world or original characters like Helge, Geir and Kjartan

Olivia Nicole Burnette is an American actress who began her career as a child actress at the age of six. She is perhaps best known for her role in the NBC sitcom The Torkelsons (1991–1993). Burnette was nominated for eleven Young Artist Awards.

The Beatles: The Biography is the name of a 2005 biography of the 1960s rock band The Beatles written by Bob Spitz. It was first published by Little, Brown and Company on November 1, 2005.

Per Inge Torkelsen is a Norwegian comic, author, radio personality, and self declared clown. He is known for the Norwegian expression "Gi ungdommen en flaske brennevin før idretten tar dem". In 2007 he was elected into the city council in Stavanger for the Liberal Party of Norway. Between 2003 and 2007 he was the leader of the Eiganes og Våland borough council. He is listed as a clown in the telephone book.

Alf Gabriel Næsheim was a Norwegian painter and illustrator, mostly known for his architectural drawings from the city of Oslo, but also for being the first Norwegian artist that illustrated Donald Duck comic book stories.

Thorkildsen may refer to:

Kristine "Tine" Sundtoft is a Norwegian civil servant and politician for the Conservative party. She was Minister of Climate and the Environment in Solberg's Cabinet from October 2013 to December 2015.

Flying Norwegians were a Norwegian country rock group formed in 1974, who became highly successful and popular during the 1970s.

Scrap is recyclable material sold to a trader below its original purchase price. A scrap dealer is a person who is brought or collects scrap and then sells it on for profit.

Lasse Torkelson Trædal was a Norwegian farmer, schoolteacher and politician for the Liberal Party.

Saamund Olsen Bergland was a Norwegian state auditor and politician.

Per Dybvig is a Norwegian illustrator, visual artist and animator.