Triple A-Metal is a record company, recording studio, and also the name of its webpage, created and directed by Alberto Ardines from Sauze (former WarCry and Avalanch drummer).

Alberto Ardines is a Spanish musician. He is working on a new alternative/power metal band called Sauze that he formed with Manuel Ramil, Fernando Mon, and Toni Amboaje.

Sauze is an alternative/power metal band from Asturias, Spain. The band was formed in 2008 after the departure of the ex-WarCry members Alberto Ardines, Fernando Mon, and Manuel Ramil, along with ex-Hard Spirit Toni Amboaje.

WarCry is a Spanish power metal band led by founder, singer, and songwriter Víctor García. Formed in 2001 when García and drummer Alberto Ardines were ejected from Avalanch, the band has since released seven studio albums and two live albums, with an eighth studio album currently in progress. WarCry has had a fluctuating lineup with García as the sole constant member. The band has been acclaimed as one of Spain's most famous heavy metal acts and has won numerous awards in both Spain and Latin America.

Triple A-Metal was created in 2007 to support and help new Spanish bands who play heavy metal (and its subgenres), "trying to give an opportunity to those bands who had just entered in the world of music", as said by Ardines.

The webpage shows the bands they're working with and their works, also publicizes everything related to Ardines within the music, such as his avatars as record producer, technician, mastering and mixing, etc.. 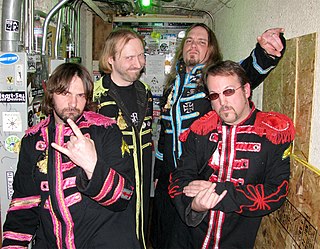 Beatallica is a mash-up band that plays music made from combinations of songs of the Beatles and Metallica. A Beatallica song is typically a blend of a Beatles song and a Metallica song with a related title, though sometimes just a Beatles song will be used as a basis with modified lyrics. The lyrics slip back and forth between the two songs, or occasionally neither, in lieu of original lyrics comically referencing Metallica, heavy metal music, or the heavy metal community. While the scansion and melody are usually Beatles-based, the music is played metal style with some Metallica riffs and solos thrown in. Consistent quirks made in the lyrics also criticize glam metal much in the fashion that thrash metal fans would do, as well as many references to blood. Their version of "I Want to Hold Your Hand" called "I Want to Choke Your Band", is an example of their criticism towards glam metal.

Bewitching the Pomerania is the second EP by Polish extreme metal band Behemoth. It was released in 1997 by Solistitium Records. It was recorded at P.J. Studios in February 1997 and mastered at Vox Mortiis Studio. The EP was the first release of the band, on which Zbigniew Robert "Inferno" Promiński, who has been a member of the band until today, played the drums. Bewitching the Pomerania also marks the band's passage from black metal music to a style more similar to death metal. 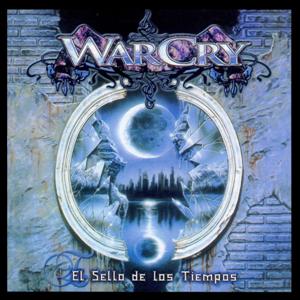 El Sello de los Tiempos is the second studio album by the Spanish power metal band WarCry, released on December 1, 2002 through Avispa Music. This album is considered to be their first effort as a band, because all the musicians appeared as full-time members, and contributed to the composition, arrangements, and recording of the album.

Alea Jacta Est is the third studio album by the Asturian power metal band WarCry, released on January 1, 2004, and distributed through Avispa.

Roberto García is the bassist for the power metal band WarCry, also known for his work on Avalanch.

Manuel Ramil is a Spanish musician, best known as the former keyboardist for the Power metal band WarCry and Torquemada and as the current keyboardist of alternative/power metal band Sauze, formed by himself, along with Alberto Ardines, Fernando Mon, and Toni Amboaje. His influences are Dream Theater, Yngwie Malmsteen, Angra, Symphony X, Kamelot, Ark, and many more.

Directo A La Luz is the first live album by the Spanish power metal band WarCry, recorded in Madrid, Spain on November 5, 2005 in the music hall "Divino Aqualung" to a crowd of over 2,500 people. In the concert WarCry played various songs from every album released to that point. It was released on February 27, 2006 in digipak format DVD-CD. The CD format only contained a selection of the band's most successful songs played on the concert.

Fernando is a member of the Asturian power metal band WarCry. He is working on a new alternative/power metal band called Sauze formed by himself, along with Manuel Ramil, Alberto Ardines, and Toni Amboaje. 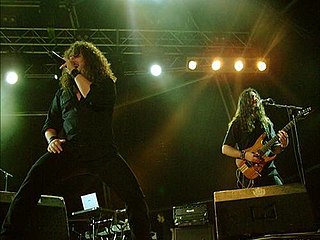 WarCry is a Spanish power metal band formed in 2001 after Víctor García and Alberto Ardines were ejected from Avalanch. WarCry has released five studio albums, one live album, one demo, and one music video. This list does not include material performed by members or former members of WarCry that was recorded with Avalanch, DarkSun, Relative Silence, Darna, or Sauze.

La Quinta Esencia is the fifth studio album by the power metal band WarCry, released on September 18, 2006, and distributed through Avispa Music. Front man, and lead vocals Víctor García said that this album is a mixture of all the works from their four previous albums.

Toni Amboaje is a Spanish-born singer former metal band Sauze member, which formed in early 2008 and currently the lead singer for AMBOJE

Adult album alternative is a radio format. A spinoff from the album-oriented rock format, its roots trace to the 1960s and 1970s from the earlier freeform and progressive formats.

Víctor García is the lead vocalist and songwriter for the heavy metal band WarCry. He is the central figure and sole original member of WarCry and a former Avalanch lead vocalist, being considered one of the best Spanish metal singers. García has often cited that his biggest and most important influences are Stryper, Manowar, and Virgin Steele.