The trompa de ribagorza is a double-reeded wind instrument, revived by Mariano Pascual based oi instruments preserved in Graus, similar to those used in the 19th century by the pipers of Caserras del Castillo and other areas in Baja Ribagorza Oriental.

Benabarre, in Ribagorçan and Aragonese: Benavarri is a town and municipality in the Aragonese comarca of Ribagorza, in the province of Huesca, Spain.

Ramiro I was the first King of Aragon from 1035 until his death, although he is sometimes described as a petty king. He would expand the nascent Kingdom of Aragon through his acquisition of territories, such as Sobrarbe and Ribagorza, and the city of Sangüesa. Sancho Ramírez, his son and successor, was King of Aragon, but also became King of Pamplona.

The County of Ribagorza or Ribagorça was a medieval county on the southern side of the Pyrenees, including the northeast of modern Aragón and part of the northwest of modern Catalonia, both in Spain. It was originally the independent creation of a local dynasty, later absorbed into the Kingdom of Navarre and then into the Crown of Aragon. It had a strong historical connection with the neighboring counties of Sobrarbe and Pallars. Its territory consisted of the valleys of the rivers Ésera, Isábena, and Noguera Ribagorzana. The seat of its counts was at Benabarre. Other notable towns include Benasque, Graus and Pont de Suert. Today the western portion of the county roughly corresponds to the Aragonese comarca of Ribagorza, with its administrative centre in Graus; the eastern portion roughly corresponds to the Catalan comarca of Alta Ribagorça.

Sérgio Azevedo is a Portuguese composer of contemporary classical music. He also writes articles and books about music, collaborates often with the National Radio Broadcasting, and is a teacher at the Escola Superior de Música de Lisboa (ESML) since 1993.

Sobrarbe is one of the comarcas of Aragon, Spain. It is located in the northern part of the province of Huesca, part of the autonomous community of Aragon in Spain. Many of its people speak the Aragonese language locally known as fabla.

Muniadona of Castile, also called Mayor or Munia, was Queen of Pamplona by her marriage with King Sancho Garcés III, who later added to his domains the Counties of Ribagorza (1017) and Castile (1028) using her dynastic rights to these territories.

Sancho García, called of the Good Laws, was the count of Castile and Álava from 995 to his death.

The County of Pallars or Pallás was a de facto independent petty state, nominally within the Carolingian Empire and then West Francia during the ninth and tenth centuries, perhaps one of the Catalan counties, originally part of the Marca Hispanica in the ninth century. It was coterminous with the upper Noguera Pallaresa valley from the crest of the Pyrenees to the village of Tremp, comprising the Vall d'Àneu, Vall de Cardós, Vall Ferrera, the right bank of the Noguera Ribagorçana, and the valley of the Flamicell. It roughly corresponded with the historic region of Catalonia called Pallars. Its chief city was Sort.

Bisaurri, in Benasquese: Bisaúrrilocal pronunciation: [bisaˈuri]) or in Aragonese: Bisagorri, is a municipality located in the province of Huesca, Aragon, Spain. According to the 2004 census (INE), the municipality has a population of 248 inhabitants.

Chireta is an Aragonese type of savoury pudding. It is a flavorful rustic dish typical to the counties of Ribagorza, Sobrarbe and Somontano de Barbastro, high up in the Spanish Pyrenees. In the Catalan counties of Alta Ribagorça and Pallars, formerly territories united to the historic County of Ribagorza in medieval Aragon, chireta is known as gireta, or girella, respectively.

Raymond I was the first independent Count of Pallars and Ribagorza from 872 until his death. Early speculation made him a scion of the Counts of Toulouse, but he is certainly the "Count Raymond, son of Count Lupus ... in the country of Pallars" of a 920 document. His father may have been the Basque count Lupus I of Bigorre. During his lifetime Pallars represented the easternmost extent of the Basque language. 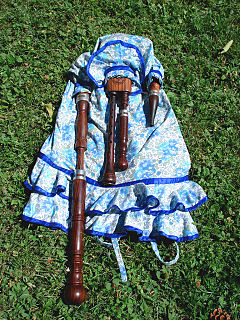 The gaita de boto is a type of bagpipe native to the Aragon region of northern Spain.

Ribagorza or Ribagorça is a comarca (county) in Aragon, Spain, situated in the north-east of the province of Huesca. It borders the French département of the Haute-Garonne to the north and Catalonia to the east. Within Aragon its neighboring counties are Sobrarbe, Somontano de Barbastro, and La Litera. It roughly corresponds to the Aragonese part of the medieval County of Ribagorza. The administrative capital of Ribagorza is Graus, although the historical capital of the county was at Benabarre.

William Isarn was the Count of Ribagorza from 1010 until his death in 1017 or 1018. He was a young man when he became party to a power-sharing agreement between his cousin and her husband, sponsored by the Count of Castile. He used a Castilian army to remove the Muslim garrisons from the valley of the Isábena, but before his work of Reconquista could be completed, he was assassinated while trying to reestablish his family's rights in the Val d'Aran. His death provoked a succession crisis that ended in the absorption of Ribagorza into the domains of the King of Navarre.

Villanova, in Benasquese: Bilanoba or Billanoba, in Catalan: Vilanova d'Éssera, in Aragonese: Vilanova, is a municipality located in the Ribagorza comarca, province of Huesca, Aragon, Spain. According to the 2010 census (INE), the municipality has a population of 154 inhabitants.

Alfonsode Aragon y Escobar (1417–1495), Duke of Villahermosa, Count of Ribagorza and Cortes and Grand Master of the Order of Calatrava, was an illegitimate son of John II of Aragon and one of his mistresses, Leonor de Escobar, daughter of Alfonso Rodríguez de Escobar.

Beranuy, in Ribagorçan and Aragonese: Beranui is a municipality located in the Ribagorza (comarca) comarca, province of Huesca, Aragon, Spain. According to the 2010 census (INE), the municipality has a population of 104 inhabitants.

Vicente Zarzo Pitarch is a Spanish horn player who has played as a soloist in several European and North American orchestras. He is also the author of several books on the history and technique of the horn.

Alfonso de Aragón y Foix also called Alfonso I of Gandía "the old" and Alfonso IV of Ribagorza, was the eldest son of Count Pedro de Aragón y Anjou and Juana of Foix. He was the grandson of James II of Aragon and cousin of Pedro IV "the Ceremonious". He held the titles of Duke of Gandia, Count of Denia, Count of Ribagorza, Marquis of Villena, and first Constable of Castile.