Truth Be Told focuses on seven individuals raised in the Jehovah's Witnesses religion. In a series of informal interviews they reveal experiences including the effects of proselytizing door-to-door, shunning non-observant family and friends, suffering the discouragement of pursuing dreams like gaining a higher education and missing other societal holidays and customs. The film cuts between talking-head interviews and visual storytelling techniques including dramatic reenactments, motion graphic sequences and montages.

The documentary features an interview with retired mixed martial arts fighter and television personality Nathan Quarry. Quarry grew up as a member of the Jehovah's Witnesses in a variously oppressive and controlling environment. After a period of self-discovery, Quarry rejected his Jehovah's Witnesses upbringing, which caused him to become alienated from his family and former friends.

The film is a non-neutral presentation of the Jehovah's Witnesses religion, arguing that it fosters a profit-driven, isolationist culture characterized by fear, totalitarian corporate leadership, intellectual & spiritual intimidation, suspension of critical thinking, failed prophecies, doctrinal inconsistency and improper handling of physical and sexual abuse allegations within the church. [1]

The documentary is the first feature-film directed by Gregorio Smith. He describes his film as an honest glimpse into the culture of growing up in the Jehovah's Witnesses religion that is at once immersive, informational, expository and controversial. [2]

Jehovah's Witnesses is a millenarian restorationist Christian denomination with nontrinitarian beliefs distinct from mainstream Christianity. The group reports a worldwide membership of approximately 8.68 million adherents involved in evangelism and an annual Memorial attendance of over 20 million. Jehovah's Witnesses are directed by the Governing Body of Jehovah's Witnesses, a group of elders in Warwick, New York, United States, which establishes all doctrines based on its interpretations of the Bible. They believe that the destruction of the present world system at Armageddon is imminent, and that the establishment of God's kingdom over the earth is the only solution for all problems faced by humanity.

Jehovah's Witnesses base their practices on the biblical interpretations of Charles Taze Russell (1852–1916), founder of the Bible Student movement, and of successive presidents of the Watch Tower Society, Joseph Franklin Rutherford and Nathan Homer Knorr. Since 1976 practices have also been based on decisions made at closed meetings of the group's Governing Body. The group disseminates instructions regarding activities and acceptable behavior through The Watchtower magazine and through other official publications, and at conventions and congregation meetings.

Minersville School District v. Gobitis, 310 U.S. 586 (1940), was a decision by the Supreme Court of the United States involving the religious rights of public school students under the First Amendment to the United States Constitution. The Court ruled that public schools could compel students—in this case, Jehovah's Witnesses—to salute the American Flag and recite the Pledge of Allegiance despite the students' religious objections to these practices. This decision led to increased persecution of Witnesses in the United States. The Supreme Court overruled this decision three years later, in West Virginia State Board of Education v. Barnette.

Numerous cases involving Jehovah's Witnesses have been heard by Supreme Courts throughout the world. The cases revolve around three main subjects:

Jehovah's Witnesses have received criticism from mainstream Christianity, members of the medical community, former members, and commentators regarding their beliefs and practices. The movement has been accused of doctrinal inconsistency and reversals, failed predictions, mistranslation of the Bible, harsh treatment of former members and autocratic and coercive leadership. Criticism has also focused on their rejection of blood transfusions, particularly in life-threatening medical situations, and claims that they have failed to report cases of sexual abuse to the authorities. Many of the claims are denied by Jehovah's Witnesses and some have also been disputed by courts and religious scholars.

Joseph Franklin Rutherford, also known as Judge Rutherford, was the second president of the incorporated Watch Tower Bible and Tract Society of Pennsylvania. He played a primary role in the organization and doctrinal development of Jehovah's Witnesses, which emerged from the Bible Student movement established by Charles Taze Russell. 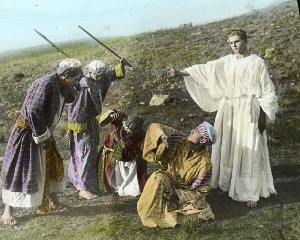 Mormon cinema usually refers to films with themes relevant to members of The Church of Jesus Christ of Latter-day Saints. The terminology has also been used to refer to films that do not necessarily reflect Mormon themes but have been made by Mormon filmmakers.

White Teeth is a 2000 novel by the British author Zadie Smith. It focuses on the later lives of two wartime friends—the Bangladeshi Samad Iqbal and the Englishman Archie Jones—and their families in London. The novel is centred around Britain's relationships with people from formerly colonised countries in Africa, Asia, and the Caribbean.

Jehovah's Witnesses believe their allegiance belongs to God's Kingdom, which they view as an actual government. They refrain from saluting the flag of any country or singing nationalistic songs, which they believe are forms of worship, although they may stand out of respect. They also refuse to participate in military service—even when it is compulsory—and do not become involved in politics. They believe Jesus' refusal to rule the kingdoms of the world as offered by the Devil, his refusal to be made king of Israel by the Jews, and his statements that he, his followers, and his kingdom are not part of the world, provide the bases for not being involved in politics or government. Witnesses are taught that they should obey laws of the governments where they live unless such laws conflict with their beliefs, such as operating covertly in countries where their activities are banned.

Raymond Victor Franz was a member of the Governing Body of Jehovah's Witnesses from October 20, 1971 until his removal on May 22, 1980, and served at the organization's world headquarters for fifteen years, from 1965 until 1980. Franz stated the request for his resignation and his subsequent disfellowshipping resulted from allegations of apostasy. Following his removal, Franz wrote two books that related his personal experiences with the Watch Tower Bible and Tract Society and his views on Jehovah's Witnesses teachings.

Truth Be Told may refer to:

Jehovah's Witnesses originated as a branch of the Bible Student movement, which developed in the United States in the 1870s among followers of Christian Restorationist minister Charles Taze Russell. Bible Student missionaries were sent to England in 1881 and the first overseas branch was opened in London in 1900. The group took on the name International Bible Students Association and by 1914 it was also active in Canada, Germany, Australia and other countries. The movement split into several rival organizations after Russell's death in 1916, with one—led by Russell's successor, Joseph "Judge" Rutherford—retaining control of both his magazine, The Watch Tower, and his legal and publishing corporation, the Watch Tower Bible and Tract Society of Pennsylvania.

Knocking is a 2006 documentary film directed by Joel Engardio and Tom Shepard that focuses on the civil liberties fought for by Jehovah's Witnesses. It focuses primarily on the stories of three Jehovah's Witnesses, and how their lives demonstrate three fundamental Witness teachings that have affected society in general: Conscientious objection, and rejection of blood transfusions and saluting the flag.

Nathan Parker "Nate" Quarry is a retired American mixed martial arts fighter who is most notable for his appearance in The Ultimate Fighter, a reality show from the Ultimate Fighting Championship, as well as co-hosting the show MMA Uncensored Live.

Jehovah's Witnesses suffered religious persecution in Nazi Germany between 1933 and 1945 after refusing to perform military service, join Nazi organizations or give allegiance to the Hitler regime. An estimated 10,000 Witnesses—half of the number of members in Germany during that period—were imprisoned, including 2000 who were sent to Nazi concentration camps. An estimated 1200 died in custody, including 250 who were executed. They were the first Christian denomination banned by the Nazi government and the most extensively and intensively persecuted.

Joel P. Engardio is a local news columnist in San Francisco. He is an award-winning journalist, documentary filmmaker and civil liberties advocate. Engardio served as a member of the San Francisco Democratic County Central Committee. Engardio's PBS documentary Knocking won the jury award for Best Documentary at the USA Film Festival. At the American Civil Liberties Union, Engardio combined reporting and multimedia storytelling skills to pioneer more effective ways to mount lawsuits and communicate public education efforts. He was the ACLU’s first “story finder” and implemented a process that applied journalism methods to plaintiff-finding. Engardio found plaintiffs who had narratives that played well in both the court of law and public opinion. He also started a video department that produced shorts for online audiences, which prompted mainstream media to cover the same stories.

Amber Scorah is a Canadian-American writer, speaker, and activist.