Three ships of the United States Navy have been named USS Iwo Jima, in memory of the Battle of Iwo Jima.

USS New Orleans may refer to:

USS Iwo Jima (LHD-7) is a Wasp-class amphibious assault ship of the United States Navy. The ship was named for the Battle of Iwo Jima of World War II. The ship was commissioned in 2001 and is in service.

USS Iwo Jima (LPH-2) was the lead ship of her class and type—the first amphibious assault ship to be designed and built from the keel up as a dedicated helicopter carrier. She carried helicopters and typically embarked USMC elements of a Marine Amphibious Unit (MAU)/later Marine Expeditionary Unit (MEU) principally the Aviation Combat Element (ACE) to conduct heliborne operations in support of an amphibious operation. There was no well deck to support landing craft movement of personnel or equipment to/from shore. Iwo Jima was the second of three ships of the United States Navy to be named for the Battle of Iwo Jima, although the first to be completed and see service. 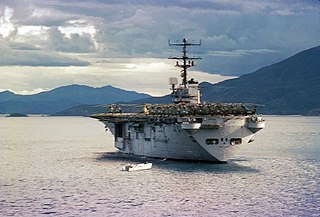 Landing platform helicopter (LPH) is a term used by some navies to denote a type of amphibious warfare ship designed primarily to operate as a launch and recovery platform for helicopters and other VTOL aircraft. As such, they are considered a type of helicopter carrier.

The Iwo Jima-class amphibious assault ships of the United States Navy were the first amphibious assault ships designed and built under the SCB 157 characteristics as dedicated helicopter carriers, capable of operating up to 20 helicopters to carry up to 1,800 marines ashore. They were named for battles featuring the United States Marine Corps, starting with the Battle of Iwo Jima. The first ship of the class was commissioned in 1961, and the last was decommissioned in 2002. The hull classification of "LPH" stands for "Landing ship, Personnel, Helicopter".

Haskell-class attack transports (APA) were amphibious assault ships of the United States Navy created in 1944. They were designed to transport 1,500 troops and their combat equipment, and land them on hostile shores with the ships' integral landing craft.

USS Hocking (APA-121) was a Haskell-class attack transport of the United States Navy. She was built and used during World War II. She was of the VC2-S-AP5 Victory ship design type. Hocking was named for Hocking County, Ohio.

Iwo Jima may refer to:

USS Spectacle (AM-305) was a steel-hulled Admirable class minesweeper built for the U.S. Navy during World War II. A trained crew boarded the new vessel, practiced with her minesweeping gear, and then proceeded to the Pacific Ocean to clear mines from Japanese beaches so that Allied forces could invade. While performing this dangerous task of mine clearance, a Japanese plane strafed her, and another deliberately crashed into her. When she returned to the United States, her battle damage was so severe that the U.S. Navy decided to scrap, rather than to repair, her. She was awarded two battle stars.

USS Gear (ARS-34) was a Diver-class rescue and salvage ship acquired by the U.S. Navy during World War II. Her task was to come to the aid of stricken vessels.

USS LST-70 was an LST-1-class tank landing ship in the United States Navy. Like many of her class, she was not named and is properly referred to by her hull designation. LST-70 was manned by a United States Coast Guard crew throughout the war.

USS LSM-216 was a LSM-1-class landing ship medium built for the U.S. Navy during World War II. Like many of her class, she was not named and is properly referred to by her hull designation.

USS Sanborn (APA-193) was a Haskell-class attack transport acquired by the U.S. Navy during World War II for the task of transporting troops to and from combat areas.

USS LST-724 was an LST-542-class tank landing ship acquired by the U.S. Navy during World War II for the task of landing troops and supplies on enemy beachheads.

USS Lubbock (APA-197) was a Haskell-class attack transport acquired by the U.S. Navy during World War II for the task of transporting troops to and from combat areas.

USS LST-247 was a tank landing ship in the United States Navy. Like many of her class, she was not named and is properly referred to by her hull designation.

The USS Havre was a United States Navy PCE-842-class patrol craft escort in commission from 14 February 1944 to 1 July 1970. She served in the Central Pacific during World War II, supporting invasions of Battle of Iwo Jima and the Battle of Okinawa, and was present in Tokyo Bay for the formal Surrender of Japan on 2 September 1945. Unlike other ships from this class, which were scrapped or sold to other nations, the (PCE-877) stayed the property of the United States Navy, who transferred ownership to the United States Navy Reserve as Naval Reserve Training Ship for 9th Naval District (Chicago) in April 1954. She was renamed USS Havre (PCE-877) on 15 February 1956 as part of a Navy-wide initiative to provide names to all numbered ships. The USS Havre served on Great Lakes until struck from Navy list 1 July 1970.