USS Manatee has been the name of two United States Navy vessels and may refer to either one of the following: 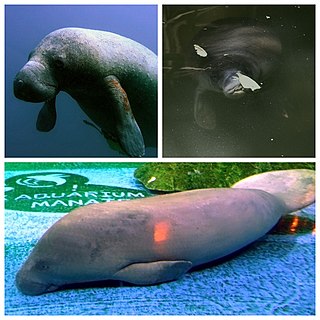 Manatees are large, fully aquatic, mostly herbivorous marine mammals sometimes known as sea cows. There are three accepted living species of Trichechidae, representing three of the four living species in the order Sirenia: the Amazonian manatee, the West Indian manatee, and the West African manatee. They measure up to 4.0 metres (13.1 ft) long, weigh as much as 590 kilograms (1,300 lb), and have paddle-like flippers. The etymology of the name is unclear, with connections having been made to Latin manus (‘hand’), and to a word – sometimes cited as manati – used by the Taíno, a pre-Columbian people of the Caribbean, meaning "breast". Manatees' other name, sea cows, comes from the fact that they are slow plant-eaters, peaceful and similar to cows on land. They often graze on water plants in tropical seas. 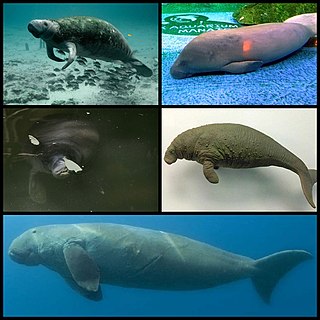 The Sirenia, commonly referred to as sea-cows or sirenians, are an order of fully aquatic, herbivorous mammals that inhabit swamps, rivers, estuaries, marine wetlands, and coastal marine waters. The Sirenia currently comprise the families Dugongidae and Trichechidae (manatees) with a total of four species. The Protosirenidae and Prorastomidae families are extinct. Sirenians are classified in the clade Paenungulata, alongside the elephants and the hyraxes, and evolved in the Eocene 50 million years ago (mya). The Dugongidae diverged from the Trichechidae in the late Eocene or early Oligocene. 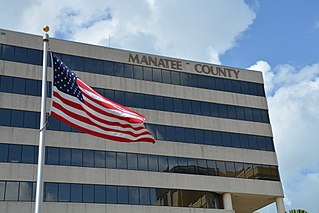 Manatee County is a county in the U.S. state of Florida. As of the 2010 US Census, the population was 322,833. Manatee County is part of the North Port-Sarasota-Bradenton Metropolitan Statistical Area. Its county seat and largest city is Bradenton. The county was created in 1855 and named for the Florida manatee, Florida's official marine mammal. Features of Manatee County include access to the southern part of the Tampa Bay estuary, the Sunshine Skyway Bridge, and the Manatee River. Manatee County ranks 15th among Florida counties in population. 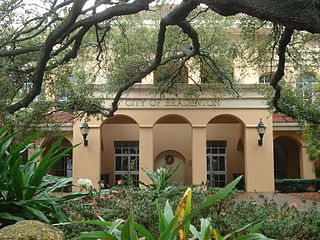 Bradenton is a city and the county seat of Manatee County, Florida, United States. The U.S. Census Bureau estimated the city's 2019 population to be 59,439. Bradenton is a principal city of the North Port–Sarasota–Bradenton metropolitan statistical area, which had a 2018 estimated population of 821,573.

The Brevard County Manatees were a minor league baseball team of the Class A-Advanced Florida State League from 1994 to 2016. They were based in Viera, Florida, and played their home games at Space Coast Stadium; built in 1994, the park held 5,346 people and was also the spring training home of Major League Baseball's Florida Marlins, Montreal Expos, and Washington Nationals. The team left Brevard County after the 2016 season for Kissimmee, Florida, where it began play in 2017 as the Florida Fire Frogs.

Manistee may refer to: 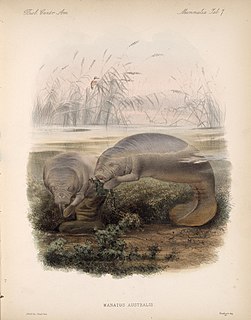 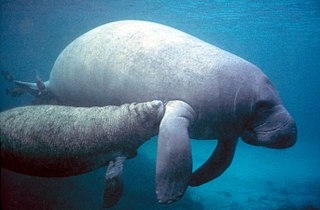 The West Indian Manatee or "sea cow", also known as North American manatee, is the largest surviving member of the aquatic mammal order Sirenia. It is further divided into two subspecies, the Florida manatee(T. m. latirostris) and the Antillean or Caribbean manatee(T. m. manatus), based on genetic and morphological studies. The Florida subspecies is primarily found along the coasts of Florida, but its range extends as far west as Texas and as far north as Massachusetts. The Antillean subspecies has a sparse distribution throughout the Caribbean, ranging as far north as Mexico and as far south as Brazil.

Blue Spring State Park is a state park located west of Orange City, Florida, in the United States. The park is a popular tourist destination; available activities include canoeing, SCUBA diving, kayaking, fishing, camping, hiking, wildlife watching, and swimming. The spring in the park is the largest on the St. Johns River. Due to its relatively warm temperature of 73 °F (23 °C), the spring attracts many Florida manatees during the winter. About 102 million US gallons (390,000 m3) of water flow out of Blue Spring into the St. Johns River every day.

State College of Florida, Manatee–Sarasota (SCF) is a public college with campuses located in Manatee and Sarasota counties, Florida. Part of the Florida College System, it is designated a "state college" because it offers a greater number of bachelor's degrees than community colleges. 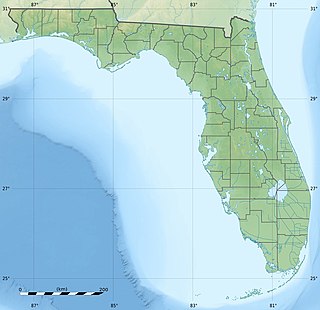 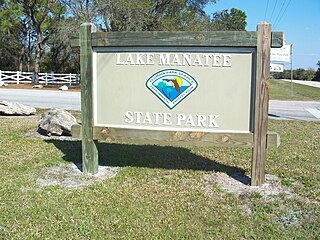 Manatee Springs State Park is a Florida State Park located six miles west of Chiefland on SR 320, off US 19. Manatee Spring is a first magnitude spring that flows directly into the Suwannee River by way of a short run. Present also are swamps and hardwood wetlands along the Suwannee, along with many sinkhole ponds, including one with a cave 90 feet below the ground that connects to a popular divers' destination known as the catfish hotel.

USS Hubbard (DE-211/APD-53), a Buckley-class destroyer escort of the United States Navy, was named in honor of Commander Joseph C. Hubbard (1900-1942), who was killed in action, while serving aboard the heavy cruiser USS San Francisco (CA-38) during the Naval Battle of Guadalcanal on 13 November 1942.

The Manatee River is a 36-mile-long (58 km) river in Manatee County, Florida. The river forms in the northeastern corner of Manatee County and flows into the Gulf of Mexico at the southern edge of Tampa Bay.

The USS Manatee (AO-58)—the second vessel of the United States Navy to bear the name—was the Cimarron-class fleet replenishment oiler named for a river in Florida. Cimarron class oilers were named after American Indian rivers in the southern United States.

A manatee is a large, fully aquatic marine mammal sometimes known as the "sea cow".

Manatees are large marine mammals that inhabit slow rivers, canals, saltwater bays, estuaries, and coastal areas. They are a migratory species, inhabiting the Florida waters during the winter and moving as far north as Virginia and into the Chesapeake Bay, sometimes seen as far north as Baltimore, Maryland and as far west as Texas in the warmer summer months. Manatees are calm herbivores that spend most of their time eating, sleeping, and traveling. They have a lifespan of about 60 years with no known natural enemies. Some of their deaths are the result of human activity. In the past, manatees were exploited for their meat, fat, and hides.

The first USS Manatee (SP-51) was an armed motorboat that served as a United States Navy patrol vessel from 1917 until sometime shortly after World War I.