Two ships in the United States Navy have borne the name USS Wampanoag, for the Wampanoag tribe:

The first USS Wampanoag was a screw frigate in the United States Navy built during the American Civil War.

The lead ship, name ship, or class leader is the first of a series or class of ships all constructed according to the same general design. The term is applicable to military ships and larger civilian craft. 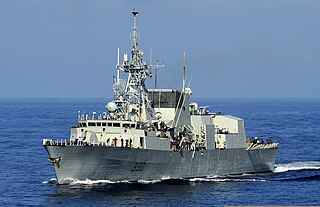 Several United States Navy ships have borne the name Florida, in honor of the state of Florida:

USS Demeter (ARB-10) was planned as a United States Navy LST-542-class tank landing ship, but was redesignated as one of twelve Aristaeus-class battle damage repair ships built for the United States Navy during World War II. Named for Demeter, she was the only US Naval vessel to bear the name. 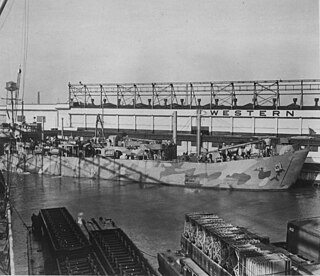 USS Coronis (ARL-10) was one of 39 Achelous-class repair ship landing craft built for the United States Navy during World War II. Named for Coronis, she was the only US Naval vessel to bear the name.

USS Roselle (AM-379) was an Auk-class minesweeper acquired by the United States Navy for the dangerous task of removing mines from minefields laid in the water to prevent ships from passing. She was the second United States Navy warship to be so named.

USS Keosanqua (ATA-198) was a Maricopa-class auxiliary fleet tug of the United States Navy. The ship was authorized as Rescue Ocean Tug ATR-125, and redesignated Auxiliary Fleet Tug USS ATA-198 on 15 May 1944. The ship was laid down at Levingston Shipbuilding Co., Orange, Texas, launched on 17 January 1945, and commissioned on 19 March 1945, Lieutenant J. L. Bean in command. She was named Keosanqua (ATA-198) on 16 July 1948.

USS Creddock (AM-356) was an Admirable-class minesweeper built for the United States Navy during World War II. The ship was ordered and laid down as PCE-905-class patrol craft USS PCE-916 but was renamed and reclassified before her July 1944 launch as Creddock (AM-356). Creddock was launched 22 July 1944 by Willamette Iron and Steel Works, Portland, Oregon; sponsored by Miss N. I. Schmidleys; and commissioned 18 December 1945, Lieutenant J. C. Elliott, USNR, in command. Creddock departed Astoria, Oregon, 6 January 1946 and arrived at San Diego, California, 4 days later. There she was placed out of commission in reserve 26 March 1946. Creddock was reclassified MSF-356 on 7 February 1955.

USS Challenge (ATA-201) was a Sotoyomo-class auxiliary fleet tug acquired by the United States Navy for service during and after World War II.

USS Tunica (ATA-178) was a Sotoyomo-class auxiliary fleet tug acquired by the United States Navy for service during and after World War II.

USS ATA-176 was an ATR-1-class rescue tug built for the United States Navy during World War II. She was laid down on 30 January 1944 and launched on 1 March as USS ATR-103, but was re-designated ATA-176 on 15 May. She was commissioned as USS ATA-176 on 19 August. She served in the U.S. Pacific Fleet during the war and was decommissioned on 30 June 1947. She was then manned with a civilian crew and placed in service, being renamed USNS Tonkawa (T-ATA-176) on 16 July 1948. Tonkawa, the first U.S. Navy vessel named for the Tonkawa, was taken out of service in 1956 and placed in reserve.

USS Wateree (ATA-174), the third ship named USS Wateree, was a Sotoyomo-class auxiliary fleet tug in the service of the United States Navy during World War II. She later served with the Military Sea Transportation Service and the Peruvian Navy as a diving support ship. In Peruvian naval service she was renamed BAP Unanue (ATA-136).

USS Penobscot (ATA-188/ATR–115) -- a Sotoyomo-class auxiliary fleet tug—was originally placed in service by the U.S. Navy as USS ATA–188 until she was renamed USS Penobscot (ATA-188) 16 July 1948. She served in the Pacific Ocean during World War II, and on the U.S. East Coast after the war’s end. She was finally decommissioned in 1971.

USS Marengo (AK-194) was an Alamosa-class cargo ship that was constructed by the US Navy during the closing period of World War II. She was declared excess-to-needs and returned to the US Maritime Commission shortly after commissioning.

The second USS Wandank (ATA-204), originally USS ATA-204, was a United States Navy auxiliary ocean tug in commission from 1945 to 1947 and again from 1952 to 1971. The ship is possibly best known for supporting scientific operations in the Marianas, in particular serving as communication relay and support ship for the bathyscaphe Trieste in Project Nekton; she towed the bathyscaphe some 260 nautical miles from Guam to the vicinity of the Challenger Deep, where, on 23 January 1960, Trieste descended to a record 37,000 feet.

USS Sonoma (ATA-175) was a tugboat of the United States Navy, which served during World War II. She was the third Navy ship to bear the name "Sonoma", which is of American-Indian origin, in accordance with the Navy's naming convention for tugs.

USS Sagamore (ATA-208), originally designated ATR-135, was laid down simply as ATA-208 on 27 November 1944 by the Gulfport Boiler and Welding Works, Port Arthur, Texas; launched on 17 January 1945; and commissioned on 19 March 1945, Lt. S. D. Northrop in command. She was the third United States Navy ship named "Sagamore" — an Algonquian term for chief.