USS Waters may refer to: 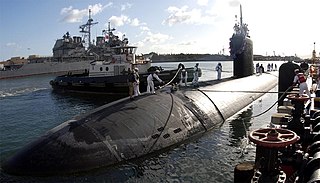 USS Cheyenne (SSN-773), the final Los Angeles-class submarine, is the third ship of the United States Navy to be named for Cheyenne, Wyoming. The contract to build her was awarded to Newport News Shipbuilding and Dry Dock Company in Newport News, Virginia on 28 November 1989 and her keel was laid down on 6 July 1992. She was launched on 16 April 1995 sponsored by Mrs. Ann Simpson, wife of Wyoming Senator Alan K. Simpson, and commissioned on 13 September 1996, with Commander Peter H. Ozimik in command. Cheyenne transferred to her homeport of Pearl Harbor, Hawaii, in 1998. 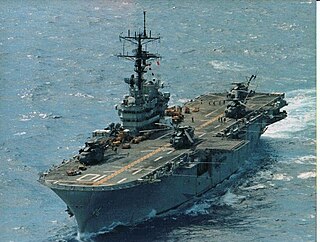 USS Tripoli (LPH-10), an Iwo Jima-class amphibious assault ship, was laid down on 15 June 1964 at Pascagoula, Mississippi, by the Ingalls Shipbuilding Corporation; launched on 31 July 1965; sponsored by Jane Cates, the wife of General Clifton B. Cates, former Commandant of the Marine Corps; and commissioned on 6 August 1966 at the Philadelphia Naval Shipyard, Capt. Henry Suerstedt, Jr., in command. Tripoli was the second US Navy ship named for the Battle of Derna in 1805. It was the decisive victory of a mercenary army led by a detachment of US Marines and US Army soldiers against the forces of Tripoli during the First Barbary War. It was the first recorded land battle of the United States fought overseas. 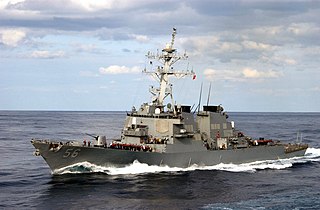 USS John S. McCain (DDG-56) is an Arleigh Burke-class destroyer currently in the service of the United States Navy. She is part of the Destroyer Squadron 15 within the Seventh Fleet, and has her homeport at the Yokosuka Naval Base in Yokosuka, Japan. 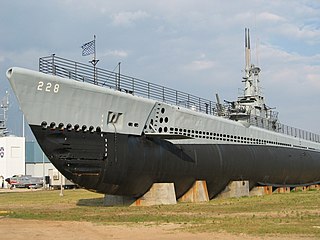 USS Drum (SS-228) is a Gato-class submarine of the United States Navy, the first Navy ship named after the drum. Drum is a museum ship in Mobile, Alabama, at Battleship Memorial Park.

USS Cusk (SS/SSG/AGSS-348), a Balao-class submarine, was a ship of the United States Navy named for the cusk, a large food fish related to the cod. 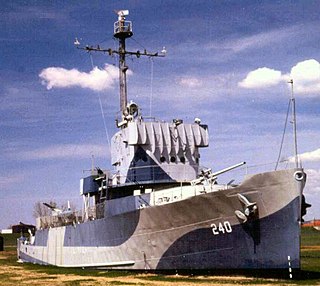 USS Hazard (AM-240) was an Admirable-class minesweeper that served in the United States Navy during World War II.

USS Lorain (PF-93), a Tacoma-class frigate, was the first commissioned ship of the United States Navy to be named for Lorain, Ohio.

USS Roselle (AM-379) was an Auk-class minesweeper acquired by the United States Navy for the dangerous task of removing mines from minefields laid in the water to prevent ships from passing. She was the second United States Navy warship to be so named.

USS Chief (AM-315) was an Auk-class minesweeper acquired by the United States Navy for the dangerous task of removing mines from minefields laid in the water to prevent ships from passing, and named after the word "chief," the head or leader of a group. 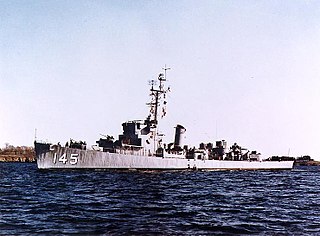 USS Spectacle (AM-305) was a steel-hulled Admirable class minesweeper built for the U.S. Navy during World War II. A trained crew boarded the new vessel, practiced with her minesweeping gear, and then proceeded to the Pacific Ocean to clear mines from Japanese beaches so that Allied forces could invade. While performing this dangerous task of mine clearance, a Japanese plane strafed her, and another deliberately crashed into her. When she returned to the United States, her battle damage was so severe that the U.S. Navy decided to scrap, rather than to repair, her. She was awarded two battle stars. 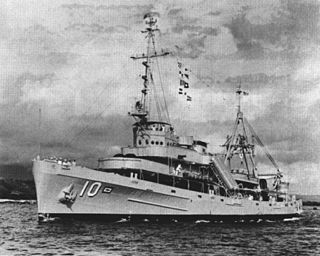 USS Greenlet (ASR-10) was a Chanticleer-class submarine rescue ship in the United States Navy. Constructed during World War II, the vessel was launched in 1942 and commissioned in 1943. Greenlet initially served at the United States Navy base at Pearl Harbor, Territory of Hawaii and Midway Atoll before transferring to Guam. During the period spent at Midway and Guam she aided in the training of submarine crews that would take part in the blockade of Imperial Japan. After the war ended, Greenlet transferred to Japan and escorted captured Japanese submarines back to the United States in 1946, spending the next couple of years training submarine crews. During the Korean War, Greenlet re-positioned back to Japan before returning to American waters. In 1958 and 1965, Greenlet took part in salvage operations of United States Navy vessels in Pacific waters. In early 1970, the vessel took part in deep recovery operations of a Grumman C-2 Greyhound aircraft that had crashed of Vietnam, earning the ship a Meritorious Unit Award. In June 1970, the ship was decommissioned, transferred to the Turkish Navy and renamed TCG Akin. Akin remained in service with the Turkish Navy until 17 November 2017

USS Penobscot (ATA-188/ATR–115) -- a Sotoyomo-class auxiliary fleet tug—was originally placed in service by the U.S. Navy as USS ATA–188 until she was renamed USS Penobscot (ATA-188) 16 July 1948. She served in the Pacific Ocean during World War II, and on the U.S. East Coast after the war’s end. She was finally decommissioned in 1971.

USS Proton (AG-147/AKS-28) -- also known as USS LST-1078 – was an LST-542-class tank landing ship launched by the U.S. Navy during the final months of World War II. Proton served as a troop ship, a cargo ship and as an electronic parts supply ship for the U.S. Pacific Fleet and was decommissioned following the Korean War. 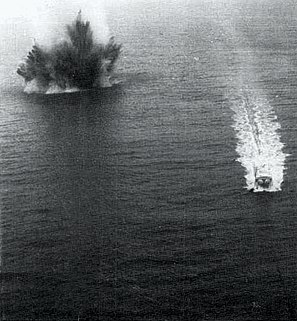 Operation End Sweep was a United States Navy and United States Marine Corps operation to remove naval mines from Haiphong harbor and other coastal and inland waterways in North Vietnam between February and July 1973. The operation fulfilled an American obligation under the Paris Peace Accord of January 1973, which ended direct American participation in the Vietnam War. It also was the first operational deployment of a U.S. Navy air mine countermeasures capability. 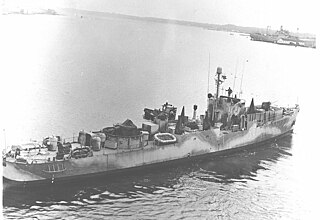 USS PGM-17 was a PGM-9-class motor gunboat built for the United States Navy during World War II. She was laid down and launched as USS PC-1189, a PC-461-class submarine chaser, but was renamed and reclassified before her November 1944 commissioning. She ran aground near Okinawa in May 1945. She was salvaged a month later, but was never repaired. She was towed to deep water and sunk in October 1945. 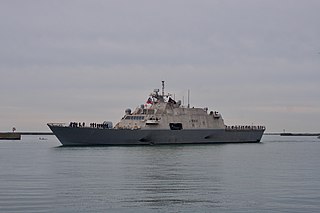 USS Little Rock (LCS-9) is a Freedom-class littoral combat ship (LCS) of the United States Navy. She is the second ship named after Little Rock, the capital city of Arkansas. The ship's estimated construction costs are between $300 million and $350 million. The keel laying ceremony for Little Rock was on 27 June 2013. The mast stepping ceremony took place on 23 April 2015, followed by the christening ceremony on 18 July 2015.

The Black Sea bumping incident of 12 February 1988 occurred when American cruiser USS Yorktown tried to exercise the right of innocent passage through Soviet territorial waters in the Black Sea during the Cold War. The cruiser was bumped by the Soviet frigate Bezzavetny with the intention of pushing Yorktown into international waters. This incident also involved the destroyer USS Caron, sailing in company with USS Yorktown and claiming the right of innocent passage, which was intentionally shouldered by a Soviet Mirka-class frigate SKR-6. Yorktown reported minor damage to its hull, with no holing or risk of flooding. Caron was undamaged.