Udo IV, Margrave of the Nordmark

When Henry II died on 4 December 1128 without an heir, his uncle Albert the Bear hoped to become margrave, but Udo was favored by Emperor Henry III and assumed control of the margravate. He remained in a bloody feud with Albert for the rest of his life, and Albert eventually became margrave.

In 1128, Udo married Mathilde, the daughter of Herman I, Count of Winzenburg. The precise identity of her mother remains unknown, but was likely either Hedwig of Assel-Woltingerode or Hedwig of Carniola-Istria. Mathilde was half-sister of Albert the Bear, the arch-enemy of her husband. Further complicating the family relations, her brother Herman was the third husband of Lutgard of Salzwedel, daughter of Rudolf I and therefore sister of Udo.

On March 15, 1130, Udo was murdered by Albert’s servants near Aschersleben. He left no male heir and was succeeded as margrave by Conrad of Plötzkau. 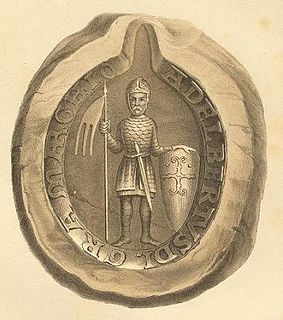 Albert the Bear was the first margrave of Brandenburg from 1157 to his death and was briefly duke of Saxony between 1138 and 1142.

Lothair Udo II was Margrave of the Nordmark from 1057 until his death and also Count of Stade. He was the only son of Lothair Udo I of the Udonids and Adelaide of Rheinfelden.

Lutgard of Salzwedel or Liutgard/Luitgard of Stade, was Queen of Denmark as the wife of King Eric III.

Hartwig, Count of Stade and Archbishop of Bremen, son of Rudolf I, Margrave of the Nordmark, and Richardis, daughter of Hermann von Sponheim, Burgrave of Magdeburg.

Friedrich, Count of Stade. Friedrich's mother was from England and died in a shipwreck off the coast of Germany. She was fleeing England after the conquest of the island by William the Conqueror.

The Udonids (Udonen) were a German noble family, ruling as both the Counts of Stade and Margraves of the Nordmark, or Northern March, from the 9th to the 12th century. The first formal member of this family was Henry I the Bald, who took his seat in Harsefeld, part of the Duchy of Franconia, where he built a castle in 965. He was the grandson of the first Count of Stade, Lothar I, who was killed by the Great Heathen Army in the Battle of Ebstorf, and was recognized as one of the Martyrs of Ebsdorf by the Catholic Church.