The Ukrainian People's Bloc (Ukrainian : Український Народний Блок) is an electoral bloc in Ukraine. In the 30 September 2007 elections, the bloc failed to win parliamentary representation winning 0,12% of the votes. [1] 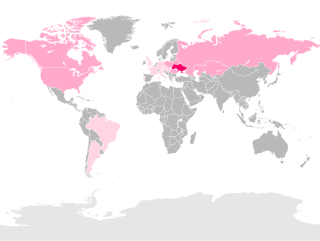 Ukraine, sometimes called the Ukraine, is a country in Eastern Europe. Excluding Crimea, Ukraine has a population of about 42.5 million, making it the 32nd most populous country in the world. Its capital and largest city is Kiev. Ukrainian is the official language and its alphabet is Cyrillic. The dominant religions in the country are Eastern Orthodoxy and Greek Catholicism. Ukraine is currently in a territorial dispute with Russia over the Crimean Peninsula, which Russia annexed in 2014. Including Crimea, Ukraine has an area of 603,628 km2 (233,062 sq mi), making it the largest country entirely within Europe and the 46th largest country in the world.

The All-Ukrainian Chornobyl People's Party "For the Welfare and Protection of the People" is a political party in Ukraine registered in October 1998.

The Our Ukraine–People's Self-Defense Bloc was an electoral alliance active in Ukraine from 2001 until 2012, associated with former President Viktor Yushchenko. Since 2005, the bloc had been dominated by a core consisting of the People's Union "Our Ukraine" party and five smaller partner parties. On 17 November 2011, the Ukrainian Parliament approved an election law that banned the participation of blocs of political parties in parliamentary elections. Since then several members of the Bloc have since merged with other parties.

The People's Party is a political party in Ukraine. It was previously named as the Agrarian Party of Ukraine. The party is led by Volodymyr Lytvyn. In September 2011 he claimed that his party was only surpassed in membership by the Party of Regions and Bloc Yulia Tymoshenko.

The All-Ukrainian Union "Fatherland", often referred to as Batkivshchyna even in English, is a Ukrainian political party led by Yulia Tymoshenko. The party has been an observer member of the European People's Party (EPP) since 2008. 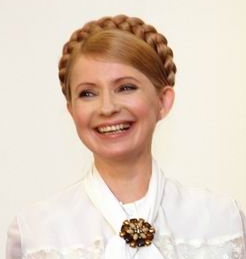 The Our Ukraine is a centre-right political party of Ukraine formed in 2005. The party supported former president Viktor Yushchenko. It lost much of its support nationwide, yet still has some regional representation in the Western Ukraine.

The Ukrainian People's Party is a political party in Ukraine, registered on Old Year's Day 1999 as Ukrainian National Movement.

For life, formerly All-Ukrainian Union "Center" (1999—2016) is a political party in Ukraine registered December 1999 that has its current name since 2016. The party leader is Vadim Rabinovich. From 2014 to 2018, the head of political council of party was Evgeny Murayev. Viktor Medvedchuk succeeded him in 2018.

The Lytvyn Bloc, formerly Lytvyn's People's Bloc, was a centrist political alliance in Ukraine from 2006 till 2012 led by Volodymyr Lytvyn. It is one of successors of the previous political alliance For United Ukraine which fell apart after Party of Regions left it. In 2007 the bloc surprisingly managed to return to parliament as a union of the People's Party and the Labour Party. According to Lytvyn the party had 400,000 members in October 2009. 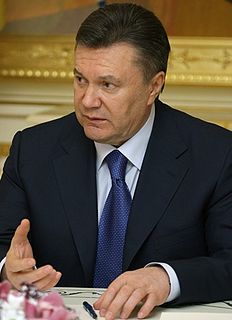 Early parliamentary elections in Ukraine took place on 30 September 2007. The date of the election was determined following agreement between the President Viktor Yushchenko, the Prime Minister Viktor Yanukovych and the Chairman of the Verkhovna Rada Oleksandr Moroz on 27 May 2007, in an attempt to resolve the political crisis in Ukraine triggered by the 2 April 2007 presidential decree on dissolution of Ukraine's parliament.

The Ukrainian Democratic Alliance for Reform was a political party in Ukraine headed by retired Ukrainian professional heavyweight boxer and the WBC world heavyweight champion emeritus Vitali Klitschko. It merged into the Petro Poroshenko Bloc on 28 August 2015. However, in 2017 UDAR was still registered as a political party and it employed two persons. The party is an observer member of the European People's Party (EPP) since 2013.

Labour Ukraine is a political party in Ukraine registered in June 2000.

New Politics is a political party in Ukraine registered in February 2001. The party is led by former Party of Regions lawmaker and former Vice Premier Minister in the Azarov Government Volodymyr Semynozhenko.

People's Front is a political party in Ukraine founded by Arseniy Yatsenyuk and Oleksandr Turchynov in 2014.

Opposition Bloc is a Ukrainian political party that was founded in 2014 as six parties that did not endorse Euromaidan merged. Legally, the party was created by renaming the lesser-known party Leading force.