The Ultra Low Delay Audio Coder (ULD) is a development of the Fraunhofer Institute for Digital Media Technology (IDMT), which is headed by one of the fathers of MP3, Karlheinz Brandenburg, and of the Fraunhofer Institute for Integrated Circuits (IIS). The ULD is a lossy audio data compression scheme that only introduces a very small amount of delay into the audio signal compared to commonly known audio coders like MP3 or AAC. This property is especially useful for communication purposes (like voice calls, video conferencing or making music via the internet), for which not only high compression ratios are necessary, but low latency is critical, too. 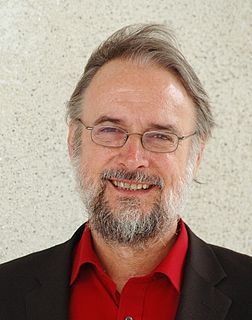 Advanced Audio Coding (AAC) is an audio coding standard for lossy digital audio compression. Designed to be the successor of the MP3 format, AAC generally achieves better sound quality than MP3 at the same bit rate. The confusingly named AAC+ (HE-AAC) does so only at low bit rates and less so at high ones.

A codec is a device or computer program for encoding or decoding a digital data stream or signal. Codec is a portmanteau of coder-decoder.

LAME is a software encoder that converts audio to the MP3 file format. LAME is a free software project that was first released in 1998, and has incorporated many improvements since then, including an improved psychoacoustic model. The LAME encoder outperforms early encoders like L3enc.

Xiph.Org Foundation is a non-profit organization that produces free multimedia formats and software tools. It focuses on the Ogg family of formats, and the most successful one has been Vorbis, an open and freely licensed audio format and codec designed to compete with the patented WMA, MP3 and AAC. As of 2013, the current development work is focusing on Daala, an open and patent-free video format and codec designed to compete with VP9 and the patented High Efficiency Video Coding. 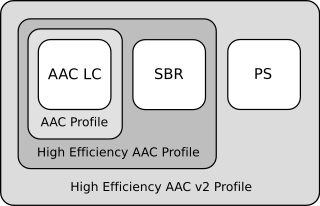 High-Efficiency Advanced Audio Coding (HE-AAC) is an audio coding format for lossy data compression of digital audio defined as an MPEG-4 Audio profile in ISO/IEC 14496-3. It is an extension of Low Complexity AAC optimized for low-bitrate applications such as streaming audio. HE-AAC version 1 profile uses spectral band replication (SBR) to enhance the compression efficiency in the frequency domain. HE-AAC version 2 profile couples SBR with Parametric Stereo (PS) to enhance the compression efficiency of stereo signals. It is a standardized and improved version of the AACplus codec.

FAAC or Freeware Advanced Audio Coder is a software project which includes the AAC encoder FAAC and decoder FAAD2. It supports MPEG-2 AAC as well as MPEG-4 AAC. It supports several MPEG-4 Audio object types, file formats, multichannel and gapless encoding/decoding and MP4 metadata tags. The encoder and decoder is compatible with standard-compliant audio applications using one or more of these object types and facilities. It also supports Digital Radio Mondiale. 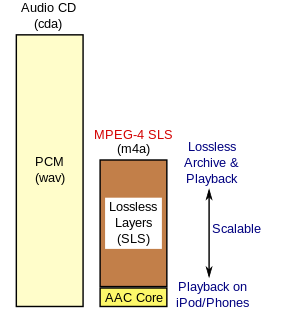 MPEG-4 SLS, or MPEG-4 Scalable to Lossless as per ISO/IEC 14496-3:2005/Amd 3:2006 (Scalable Lossless Coding), is an extension to the MPEG-4 Part 3 (MPEG-4 Audio) standard to allow lossless audio compression scalable to lossy MPEG-4 General Audio coding methods (e.g., variations of AAC). It was developed jointly by the Institute for Infocomm Research (I2R) and Fraunhofer, which commercializes its implementation of a limited subset of the standard under the name of HD-AAC. Standardization of the HD-AAC profile for MPEG-4 Audio is under development (as of September 2009).

Constrained Energy Lapped Transform (CELT) is an open, royalty-free lossy audio compression format and a free software codec with especially low algorithmic delay for use in low-latency audio communication. The algorithms are openly documented and may be used free of software patent restrictions. Development of the format was maintained by the Xiph.Org Foundation and later coordinated by the Opus working group of the Internet Engineering Task Force (IETF). 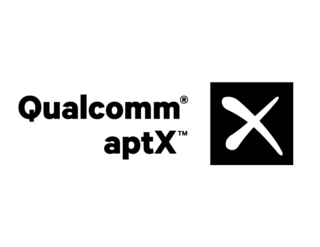 Fraunhofer FDK AAC is an open-source software library for encoding and decoding Advanced Audio Coding (AAC) format audio, developed by Fraunhofer IIS, and included as part of Android. It supports several Audio Object Types including MPEG-2 and MPEG-4 AAC LC, HE-AAC, HE-AACv2 as well AAC-LD and AAC-ELD for real-time communication. The encoding library supports sample rates up to 96 kHz and up to eight channels.