Undressing Israel: Gay Men in the Promised Land is a 46-minute documentary written by American adult-film entrepreneur, columnist, gay activist and gay pornographic film director Michael Lucas, and co-directed by Lucas and Israeli director Yariv Mozer. [1] In his debut as a documentary filmmaker, Michael Lucas portrays in this film released in 2012 Israel's thriving GLBT community through footage of Tel Aviv's vibrant nightlife, a same-sex wedding, and candid interviews with a diverse range of local Israeli gay men and lesbians, including a gay MP, an openly gay Army trainer, a drag queen, a transvestite, a young Arab-Israeli journalist, and same-sex parents raising their children and a number of artists and activists.

John Greyson is a Canadian director, writer, video artist, producer, and political activist, whose work frequently deals with gay themes. Greyson is also a professor at York University's film school, where he teaches film and video theory, film production, and editing. He was part of a loosely-affiliated group of filmmakers to emerge in the 1980s from Toronto known as the Toronto New Wave.

Lesbian, gay, bisexual, and transgender (LGBT) rights in Israel are considered the most developed in the Middle East. Although same-sex sexual activity was legalized in 1988, the former law against sodomy had not been enforced since a court decision in 1963. Israel became the first country in Asia to recognize unregistered cohabitation between same-sex couples, making it the first country in Asia to recognize same-sex unions in any capacity. Although same-sex marriages are not performed in the country, Israel recognizes same-sex marriages performed elsewhere. Discrimination on the grounds of sexual orientation was prohibited in 1992. Same-sex couples are allowed to jointly adopt, following a landmark court decision in 2008. Previously, stepchild adoption as well as limited co-guardianship rights for non-biological parents were permitted. LGBT people are also allowed to serve openly in the military. 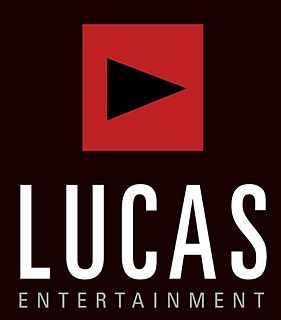 Lesbian, gay, bisexual, transgender (LGBT) people in Palestine face legal challenges and discrimination not experienced by non-LGBT residents. Male homosexuality is illegal in the Gaza Strip but not in the West Bank, although LGBT rights are not protected in either.

Etai J. Pinkas is a leader of the Israeli gay, lesbian, bisexual and transsexual community (LGBT). Pinkas served as chairman of the national LGBT association in Israel and was a member of the Tel Aviv-Yafo City Council and advises the mayor on LGBT affairs. Pinkas is an active council member of the Tel Aviv-Yafo municipality and serves as the Chair of the city's tenders committee and responsible for the Operations Division. Pinkas also chairs the municipality's steering committee for the Ayalon capping. In his profession, Pinkas is a risk management expert, specializing in environment and infrastructures. 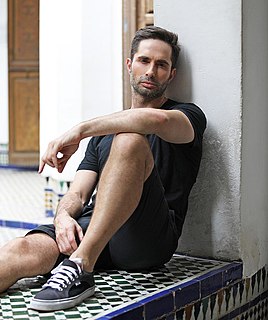 Michael Lucas is a Russian–Israeli-American gay pornographic film actor, director, activist, journalist, businessman, and the founder and CEO of Lucas Entertainment, Manhattan's largest gay-adult-film company. He is a columnist for The Advocate, HuffPost, and Pink News.

The Aguda – Israel's LGBT Task Force, known commonly as the Aguda, is an Israeli non-profit LGBT rights organization. Founded in 1975, the Aguda is based in Tel Aviv and focuses on volunteer-based initiatives and services for the LGBT community.

Yair Qedar is an Israeli filmmaker and a civil-rights activist. His academic training on 20th-century Hebrew literature, propelled him into The Hebrews — a documentary project on the Hebrew and Jewish literary canon, centered on filmic portraits of Hebrew writers from the 17 century to recent days. 14 feature length documentary films were made in the project so far. The documentary films which Qedar produced - and directed with other 10 Israeli film directors - all premiered in film festivals, aired on Israeli TV, circulated far and wide in hundreds of cinemas, cinematheques, community and cultural centers, in Israel and around the world earning 14 awards -Special Mention in Haifa film festival 2018 - Jury comments: "A unique project of artistic and historical value that wonderfully preserves via documentary films, literary and poetic pearls, some of which, unfortunately, are becoming extinct.", and 2016: first prize for filmmaking in the field of Jewish culture by the ministry of Education in Israel, 2015: the Hebrews films won the prize for best television project in the Israeli Documentary competition). The project, both digital and print, offers altogether e14 documentary films, a video archive and several books. In 2019, Docaviv festival held a special retrospective for the Hebrews films, alongside Van Leer institute in Jerusalem, the Jewish Museum in Berlin as well as other institutions.

Men of Israel is a 2009 gay pornographic film released by Lucas Entertainment studio. Journalists from The Atlantic, Out Magazine and Yediot Aharonot noted it as a landmark film as the first pornographic movie shot on location with an all-Israeli cast; while Tablet magazine and the Los Angeles Times remarked on it being the first to feature an all-Jewish cast. Director Michael Lucas—who is Jewish and obtained his Israeli citizenship in 2009—undertook the film as "a bold move to promote Israeli culture and tourism" and to counterbalance what he saw as biased portrayals of Israel in mainstream media.

Gay Days is a 2009 Israeli documentary film about the emergence of a LGBT community in Israel, starring major activists in Israel's cultural life and LGBT community: Gal Uchovsky, Eytan Fox, Ellyot, Amalia Ziv, Amit Kama and others and some rare archival footage from pride events, feature films and student films.

Homosexual relations were legalised in the state of Israel in 1988, and during the 1990s various forms of discrimination were prohibited. Debate has since centred on recognition of same-sex partnerships and the rights they confer, including inheritance, residency, and the adoption of children. The staging of LGBT pride parades has been controversial in some cases. 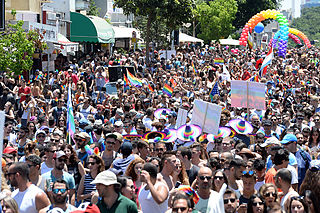 Tel Aviv Pride is a week-long series of events in Tel Aviv which takes place on the second week of June, as part of the international observance of Gay Pride Month. The key event, taking place on the Friday, is the Pride Parade itself which attracts over 250,000 attendees. As of June 2019, it is the largest LGBT Parade in Asia.

Would You Have Sex with an Arab? is a feature-length documentary film by French director Yolande Zauberman. It premiered at the 2011 Venice Film Festival, and released in France on 12 September 2012.

Amos Guttman was an Israeli film director, born in Romania. He directed the first ever Israeli LGBT-themed film and most of his films were based on events that happened in his own personal life.

TLVFest or the Tel Aviv International LGBT Film Festival is an annual film festival held in Tel Aviv, Israel. The festival is focused on LGBT themed film from around the world.

Getting Go: The Go Doc Project is a 2013 pseudo-documentary film written and directed by Cory James Krueckeberg.

Gila Goldstein was an Israeli actress, singer and transgender rights activist. She was one of the first activists of the Aguda, the oldest and largest LGBT organization in Israel. She is considered Israel's first transgender woman and an LGBT icon.

On July 22, 2018 Israeli members of the LGBT community went on strike for the day to protest against the discrimination of the LGBT community on the Israeli Surrogacy Law, and the continuing violence towards the Israeli trans community. During the strike, that was held on the same day as the fast of Tisha B'Av, many organizations and companies allowed their employees to be absent to participate in the many protest events that were held throughout the day across the country, including Tel Aviv-Yafo, Jerusalem, Haifa, Beersheba, Ra'anana and other cities.