Union Village is a village that spans Norwich, Vermont and Thetford, Vermont and sits along the Ompompanoosuc River. It contains a small cluster of homes with many dating to the early 1800s, a red brick Methodist Episcopal church built in 1836, a covered bridge, a small defunct school house, and a United States Army Corps of Engineers flood control dam. 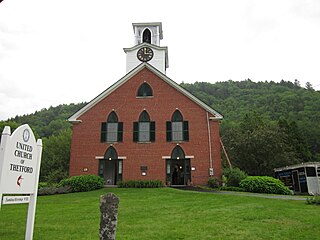 Thetford is a town in Orange County, Vermont, United States in the Connecticut River Valley. The population was 2,617 at the 2000 census. Villages within the town include East Thetford, North Thetford, Thetford Hill, Thetford Center, Rices Mills, Union Village, and Post Mills. The town office is in Thetford Center..

Rutland is a town in Rutland County, Vermont, in the United States. The population was 4,054 at the 2010 census. Rutland completely surrounds the city of Rutland, which is incorporated separately from the town of Rutland. The villages of Rutland Town effectively comprise the inner suburbs of Rutland City.

Lewiston is a former village in the town of Norwich, Windsor County, Vermont, United States. Settlers first arrived in that area in 1765; the village's namesake, Dr. Joseph Lewis, arrived two years later. Since the late 19th century, the village was centered on a rail station that was used by both Norwich and the town directly across the Connecticut River, Hanover, New Hampshire.

White Rose is an oil field development project 350 kilometres off the coast of Newfoundland. Husky Energy is the operator and 72.5 per cent interest holder in the White Rose oil fields.

Plymouth Notch is a small unincorporated community in the town of Plymouth, Windsor County, Vermont, United States. All or most of the village is included in the Calvin Coolidge Homestead District, a National Historic Landmark. 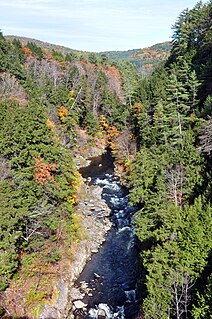 The Ottauquechee River is a 41.4-mile-long (66.6 km) river in eastern Vermont in the United States. It is a tributary of the Connecticut River, which flows to Long Island Sound.

The Ompompanoosuc River is a river, about 25 mi (40 km) long, in eastern Vermont in the United States. It is a tributary of the Connecticut River, which flows to Long Island Sound. According to the Geographic Names Information System, the river has also been known by the names "Om-pom-pa-noos-uc" and "Pompanoosuc."

The Black River is a 40.8-mile-long (65.7 km) river in the U.S. state of Vermont, and a tributary of the Connecticut River. The watershed, or drainage basin, consists of some 202 square miles (520 km2) in southeastern Vermont, almost all of which lies in Windsor County.

Lachówiec is a village in the administrative district of Gmina Baboszewo, within Płońsk County, Masovian Voivodeship, in east-central Poland.

Parry is a hamlet in the Canadian province of Saskatchewan. Listed as a designated place by Statistics Canada, the hamlet had a population of 18 in the Canada 2006 Census. 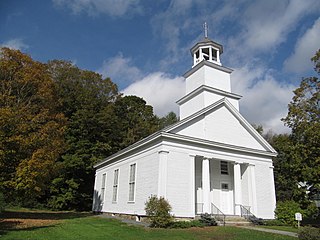 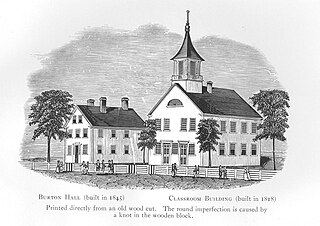 Adela is a small unincorporated community in Stanislaus County, California, United States, about one mile north of Oakdale. Adela is located at 37°47′19″N120°51′48″W.

Gornji Drenovac is a village in the municipality of Žitorađa, Serbia. According to the 2002 census, the village has a population of 420 people.

Vermontasaurus is a 25-foot-tall (7.6 m), 122-foot-long (37 m) folk art representation of a dinosaur at the Post Mills Airport in the town of Thetford, Vermont.

Post Mills is an unincorporated community in the town of Thetford, Orange County, Vermont, United States. Post Mills is home to the Post Mills Soaring Club and the Vermontasaurus, a large wooden statue of a dinosaur. Post Mills was also the site of the T.H. Chubb Rod Factory, which was, in the late 19th and early 20th century, the largest fishing rod factory in the country. By the late 1930s, the facility had been taken over by the Malmquist Wood Products Company. The factory closed in the 1990s and was torn down in 2010.

Digby Island is a small island immediately west of Kaien Island, which is the location of the city of Prince Rupert, British Columbia. The island is home to the Prince Rupert Airport and the small community of Dodge Cove. The island is named for Henry A. Digby, an officer on HMS Malacca.