Unit propagation (UP) or Boolean Constraint propagation (BCP) or the one-literal rule (OLR) is a procedure of automated theorem proving that can simplify a set of (usually propositional) clauses.

The procedure is based on unit clauses, i.e. clauses that are composed of a single literal. Because each clause needs to be satisfied, we know that this literal must be true. If a set of clauses contains the unit clause

, the other clauses are simplified by the application of the two following rules:

The application of these two rules lead to a new set of clauses that is equivalent to the old one.

For example, the following set of clauses can be simplified by unit propagation because it contains the unit clause

, this clause can be removed altogether. Since

contains the negation of the literal in the unit clause, this literal can be removed from the clause. The unit clause

is not removed; this would make the resulting set not equivalent to the original one; this clause can be removed if already stored in some other form (see section "Using a partial model"). The effect of unit propagation can be summarized as follows.

The resulting set of clauses

is equivalent to the above one. The new unit clause

Unit propagation, applied repeatedly as new unit clauses are generated, is a complete satisfiability algorithm for sets of propositional Horn clauses; it also generates a minimal model for the set if satisfiable: see Horn-satisfiability.

The unit clauses that are present in a set of clauses or can be derived from it can be stored in form of a partial model (this partial model may also contain other literals, depending on the application). In this case, unit propagation is performed based on the literals of the partial model, and unit clauses are removed if their literal is in the model. In the example above, the unit clause

would be added to the partial model; the simplification of the set of clauses would then proceed as above with the difference that the unit clause

is now removed from the set. The resulting set of clauses is equivalent to the original one under the assumption of validity of the literals in the partial model.

The direct implementation of unit propagation takes time quadratic in the total size of the set to check, which is defined to be the sum of the size of all clauses, where the size of each clause is the number of literals it contains.

Unit propagation can however be done in linear time by storing, for each variable, the list of clauses in which each literal is contained. For example, the set above can be represented by numbering each clause as follows:

and then storing, for each variable, the list of clauses containing the variable or its negation:

This simple data structure can be built in time linear in the size of the set, and allows finding all clauses containing a variable very easily. Unit propagation of a literal can be performed efficiently by scanning only the list of clauses containing the variable of the literal. More precisely, the total running time for doing unit propagation for all unit clauses is linear in the size of the set of clauses.

In logic and computer science, the Boolean satisfiability problem is the problem of determining if there exists an interpretation that satisfies a given Boolean formula. In other words, it asks whether the variables of a given Boolean formula can be consistently replaced by the values TRUE or FALSE in such a way that the formula evaluates to TRUE. If this is the case, the formula is called satisfiable. On the other hand, if no such assignment exists, the function expressed by the formula is FALSE for all possible variable assignments and the formula is unsatisfiable. For example, the formula "a AND NOT b" is satisfiable because one can find the values a = TRUE and b = FALSE, which make = TRUE. In contrast, "a AND NOT a" is unsatisfiable.

In Boolean logic, a formula is in conjunctive normal form (CNF) or clausal normal form if it is a conjunction of one or more clauses, where a clause is a disjunction of literals; otherwise put, it is a product of sums or an AND of ORs. As a canonical normal form, it is useful in automated theorem proving and circuit theory.

In mathematical logic and logic programming, a Horn clause is a logical formula of a particular rule-like form which gives it useful properties for use in logic programming, formal specification, and model theory. Horn clauses are named for the logician Alfred Horn, who first pointed out their significance in 1951.

In computer science, 2-satisfiability, 2-SAT or just 2SAT is a computational problem of assigning values to variables, each of which has two possible values, in order to satisfy a system of constraints on pairs of variables. It is a special case of the general Boolean satisfiability problem, which can involve constraints on more than two variables, and of constraint satisfaction problems, which can allow more than two choices for the value of each variable. But in contrast to those more general problems, which are NP-complete, 2-satisfiability can be solved in polynomial time.

In proof theory, the semantic tableau is a decision procedure for sentential and related logics, and a proof procedure for formulae of first-order logic. An analytic tableau is a tree structure computed for a logical formula, having at each node a subformula of the original formula to be proved or refuted. Computation constructs this tree and uses it to prove or refute the whole formula. The tableau method can also determine the satisfiability of finite sets of formulas of various logics. It is the most popular proof procedure for modal logics. 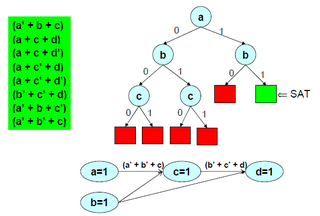 In logic and computer science, the Davis–Putnam–Logemann–Loveland (DPLL) algorithm is a complete, backtracking-based search algorithm for deciding the satisfiability of propositional logic formulae in conjunctive normal form, i.e. for solving the CNF-SAT problem.

In mathematical logic, an implication graph is a skew-symmetric directed graph G = composed of vertex set V and directed edge set E. Each vertex in V represents the truth status of a Boolean literal, and each directed edge from vertex u to vertex v represents the material implication "If the literal u is true then the literal v is also true". Implication graphs were originally used for analyzing complex Boolean expressions.

SLD resolution is the basic inference rule used in logic programming. It is a refinement of resolution, which is both sound and refutation complete for Horn clauses.

MAXEkSAT is a problem in computational complexity theory that is a maximization version of the Boolean satisfiability problem 3SAT. In MAXEkSAT, each clause has exactly k literals, each with distinct variables, and is in conjunctive normal form. These are called k-CNF formulas. The problem is to determine the maximum number of clauses that can be satisfied by a truth assignment to the variables in the clauses.

The Tseytin transformation, alternatively written Tseitin transformation, takes as input an arbitrary combinatorial logic circuit and produces a boolean formula in conjunctive normal form (CNF), which can be solved by a CNF-SAT solver. The length of the formula is linear in the size of the circuit. Input vectors that make the circuit output "true" are in 1-to-1 correspondence with assignments that satisfy the formula. This reduces the problem of circuit satisfiability on any circuit to the satisfiability problem on 3-CNF formulas.

In proof theory, an area of mathematical logic, proof compression is the problem of algorithmically compressing formal proofs. The developed algorithms can be used to improve the proofs generated by automated theorem proving tools such as SAT solvers, SMT-solvers, first-order theorem provers and proof assistants.

In computer science, conflict-driven clause learning (CDCL) is an algorithm for solving the Boolean satisfiability problem (SAT). Given a Boolean formula, the SAT problem asks for an assignment of variables so that the entire formula evaluates to true. The internal workings of CDCL SAT solvers were inspired by DPLL solvers.

Given a Boolean expression with variables, finding an assignment of the variables such that is true is called the Boolean satisfiability problem, frequently abbreviated SAT, and is seen as the canonical NP-complete problem.