Last updated April 05, 2021
This article is about the Paul Jennings story collection. For other books with similar titles, see Unseen (disambiguation).

Unseen is the ninth in a series of collections of short stories by Australian author Paul Jennings. It was first released in 1998.

A boy always gets the rude finger from the school bully when he walks home from school, and does nothing about it because he doesn't have middle fingers himself. So one day, he eats a lizard's tail, and he ends up growing new fingers. However, it is not long before his fingers become more of an embarrassment than anything else.

On the way to a sports game, some boys run over a dog; they try to get the dog replaced before its owners find out. But later they find out the dogs owner keeps throwing stuffed dogs in front of cars, and guilts the man to buy another dog. WORTH $1000

A boy gets a job fishing with triplet brothers. He gets a crush on their sister, though the brothers really hate it when anyone kisses her. One day, while fishing, they find a seashell that has an eye in it; whenever the shell opens, the nearest person sees a vision about something that does eventually come true.

A sequel to the Unmentionable story Little Squirt. When the water in Sydney becomes contaminated, Weesle is forced to stay with his aunt in the countryside. He dislikes his aunt because she is a health freak, and her son enjoys dobbing on Weesle whenever he does anything slightly wrong.

An old man has a watch that runs on his movement whenever he wears it. When he dies, he loses it, and his wife is unable to feel happy. However, their grandson tries to get the watch back and make his grandmother happy.

A man tries to buy land from another man. When the man owning the land refuses, the other man steals his car. The man sends his children to look for the car; however, the forest they live near is believed to be haunted by a ghost that can change shape, force people and animals into it, and eat them.

A boy goes to the fairground, but has no money, so he offers a job to clean the floor of the house of mirrors. However, all the reflections seem to come to life.

A rude and foul mouthed boy gets a toilet seat stuck to his head (and a parrot following him) and insults whoever teases him about it. But when the boy tries to ask for help or when someone offers him help, the parrot forces him to repeat the insults he had said previously. 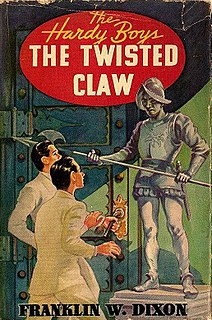 The Twisted Claw is Volume 18 in the original The Hardy Boys Mystery Stories published by Grosset & Dunlap.

Tom and Jerry: The Magic Ring is a 2001 American animated fantasy comedy film starring the seven-time Academy Award-winning cat-and-mouse duo Tom and Jerry. Produced by Warner Bros. Animation and Turner Entertainment Co., it was the first made-for-video attempt to recapture the style of William Hanna and Joseph Barbera's original film shorts from Metro-Goldwyn-Mayer as well as the final animated collaboration of both Hanna and Barbera, as Hanna died on March 22, 2001.

Lincoln Heights is an American family drama television series about Eddie Sutton, a Mission Vista police officer who moves his family back to his old neighborhood, Lincoln Heights in the city of Los Angeles, California, to start a new life and to help out his old neighborhood. It is a dangerous place to raise a family, and through the many trials the family goes through, they soon learn that settling in is not as easy as it seems. While Officer Sutton struggles to cope with everyday life as a street cop in Los Angeles, his kids try to fit in at their new schools and with their new neighbors. 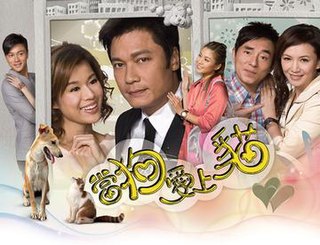 When a Dog Loves a Cat is a TVB modern drama series broadcast in July 2008.

Hotel for Dogs (1971) is a children's novel by Lois Duncan. It was adapted into a film of the same name by Nickelodeon Movies for DreamWorks Pictures, released on January 16, 2009. When the book was originally released in 1971, Andi's name was Liz, and Friday's name was Sadie. The book was re-released December 1, 2008, to promote the film with the names changed.

Turbo Dogs is a Canadian/New Zealand animated television comedy series based on the book by Bob Kolar. Co-produced by Canada's CCI Entertainment, New Zealand's Huhu Studios, United States's Scholastic Entertainment in association with The Canadian Broadcasting Corporation and Qubo with pre-production Skyship Entertainment by Smiley Guy Studios, the series premiered in the United States on Qubo on October 4, 2008 and ended on May 7, 2011.

The Pack is a 1977 horror film about a pack of abandoned dogs who turn against humans by killing them for food at Seal Island.

"The Search" is the fifteenth episode of the seventh season of the American comedy television series The Office, and the show's 141st episode overall. Written by Brent Forrester and directed by Michael Spiller, the episode aired February 3, 2011 on NBC.

Uncanny is the fourth in a series of collections of short stories by Australian author Paul Jennings. It was first released in 1988.

Undone is the seventh in a series of collections of short stories by Australian author Paul Jennings. It was first released in 1993. First book in the series not to have any short stories be adapted into an episode of Round the Twist.

The Naked Ghost, Burp! and Blue Jam is a miniature collection of short stories by Australian author Paul Jennings. It was released in 1991 and is part of the Clipper Fiction series.

Unmentionable is the sixth in a series of collections of short stories by Australian author Paul Jennings. It was first released in 1991.

Beverly Hills Chihuahua is a Mexican-American film trilogy. The films are based on a chihuahua named "Papi" going through adventures alongside his family and friends.

Unreal is the first in a series of collections of short stories by Australian author Paul Jennings. It was first released on June 6, 1985.

Tongue-Tied is the tenth in a series of collections of short stories by Australian author Paul Jennings. It was released in 2002. 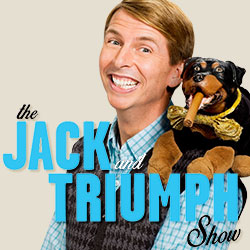 The Jack and Triumph Show is a television sitcom from Universal Television for Adult Swim that premiered on February 20, 2015 and ended on April 3, 2015 with a total of 7 episodes. The live-action series was created by Robert Smigel, Michael Koman, and David Feldman.