Formally established in Los Angeles in 1922, the largest and most active Woodcraft organization is Los Angeles' Woodcraft Rangers, which has a history of providing programs for children in the under-served areas of greater Los Angeles. Currently, Woodcraft Rangers reaches out to over 18,000 at-risk young people annually through enriching after-school and camping programs. The organization’s programs are responsive to social trends and designed to help children mature into healthy, productive adults through positive experiences and age-appropriate challenges. Over the decades Woodcraft Rangers has modified Seton’s original emphasis on outdoor life to incorporate activities that meet the needs of an increasingly urban population, but the goal of changing behavior and encouraging positive outcomes through interaction and education remains central to what they do today. By providing structured activities, a safe environment, and adult guidance after school, Woodcraft Rangers offers a positive alternative to the boredom and negative peer pressures that can lead to juvenile delinquency. As it has since Seton's time, the agency’s American Camp Association accredited summer camp programs at Blue Sky Meadow focus on outdoor living skills and nature activities. Campers are encouraged to explore and test their strengths and build character in a safe and supportive environment. After participating in nature hikes, archery, scavenger hunts, map & compass adventures, arts & crafts, survival skills games and star-gazing, campers return home with a better understanding of the outdoor world and greater confidence in their abilities. Summer camp also provides an opportunity for kids to just be kids – to have fun while forging lifelong friendships, developing important skills and discovering new interests.

In the United Kingdom, Quaker Ernest Westlake founded the Order of Woodcraft Chivalry in 1916. The OWC is the main, family-oriented group that holds activities and camps throughout the year in several Lodges. John Hargrave broke away from the OWC to found the Kindred of the Kibbo Kift. Another of the active, surviving UK organisations is the Woodcraft Folk, a socialist group originally affiliated with the Co-Operative movement that broke away from Kibbo Kift in the 1920s. They hold weekly meetings similar to Scouts. Another breakaway from the OWC, Forest Schools, revived after World War II to form Forest School Camps taking urban children into country areas in the UK.

Many groups were founded elsewhere in Europe in the inter-war years. Typical was the Czech Woodcraft League, founded in the 1920s by Milos Seifert; it grew in its early years but was suppressed for half a century, first by the Nazis and then by the Communists. It survived by guile and misdirection, emerging with the fall of Communism, a small but dedicated organisation with members of all ages. 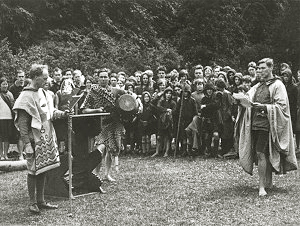 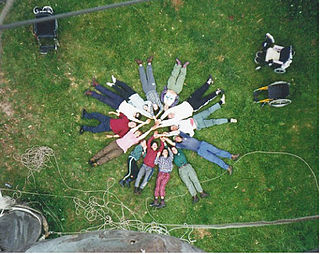 Outdoor education is organized learning that takes place in the outdoors. Outdoor education programs sometimes involve residential or journey wilderness-based experiences in which students participate in a variety of adventurous challenges and outdoor activities such as hiking, climbing, canoeing, ropes courses and group games. Outdoor education draws upon the philosophy, theory, and practices of experiential education and environmental education.

Grith Fyrd was a radical alternative educational movement in England during the 1930s. It created two permanent work camps, one at Godshill in Hampshire and the other at Shining Cliff in Derbyshire, which took in unemployed men and tried to use them as a basis for creating a land-based community.

The Order of Woodcraft Chivalry is a scouting-like movement operating in the United Kingdom, which was founded in 1916 by Ernest Westlake. It was inspired by Ernest Thompson Seton's Woodcraft Indians, and Seton was its honorary Grand Chieftain. Whilst largely being contemporary to Baden-Powell's Scouting movement, it differed from it in that it does not have the perceived military overtones of Scouting, instead focusing on the virtues of kindness, fellowship and woodcraft. The Order was small compared to Scouts, having only 1,200 members by 1926. By the 1950s it had ceased to have a major public presence. It still exists (2016) as a semi-formal network of personal friends with historic family links to the original formal organisation, with little interest in publicity and few surviving overt connections with the Woodcraft Folk or the Forest School Camps.

YMCA Camp Belknap is an all-boys summer resident camp in Tuftonboro, New Hampshire, on the shores of Lake Winnipesaukee. Founded in 1903, on Winnipesaukee's Timber Island, in the shadow of Belknap Mountain, its likely namesake. Relocated to Tuftonboro in 1907, this boys' camp was owned and operated by the New Hampshire YMCA until the demise of the state Y in 1996. It is now an independent non-profit affiliated with the national Y. Belknap celebrated its 100th year in operation in 2003, making it one of the oldest continuously operating camps in the United States.

Adirondack Woodcraft Summer Camps is a co-ed, sleep-away summer camp in the Adirondack mountains in Old Forge, New York. Also known as AWC or Woodcraft, the camp was founded in 1925 by William Abbott. Abbott, with the backing of investors, bought the property after coming across two small lakes while scouting the area for New York State. The camp was later bought by the Leach family and was directed by John Leach & Dave Leach for 40 years. Adirondack Woodcraft Camps is currently owned and directed by Doug Bartlett & Christina Schibli Bartlett.

Camp Quest is an organisation providing humanist residential summer camps for children in the United States, the United Kingdom, Switzerland and Norway. It was created in 1996 in Kentucky to provide an alternative to the traditional religiously affiliated summer camps, for the children of nontheistic, humanist or freethinking families as well as children from a religious upbringing. Camp Quest currently consists of 13 affiliated camp groups and its current Executive Director is Kim Newton.

There are many national organisations in the United Kingdom that have been established to provide services to people under the age of 18.

Camp Quest UK (CQUK) is a British secular humanist summer camp which aims to promote critical thinking in children while providing a residential camping holiday to children in the United Kingdom. The camps are designed to encourage children to 'Question, Understand, Explore, Search and Test' and often use a group of philosophical techniques called Philosophy for Children (P4C) to develop reasoning and creative thinking skills.