You're the One is a 1941 American comedy film directed by Ralph Murphy and written by Gene Markey. The film stars Bonnie Baker, Orrin Tucker, Albert Dekker, Edward Everett Horton, Lillian Cornell, Renie Riano and Jerry Colonna. The film was released on February 19, 1941, by Paramount Pictures. [1]

Bosley Crowther of The New York Times reviewed the musical negatively, criticizing it as "perilously close to being the most haphazard, pointless and dull motion picture shown on Broadway this season." [2] He specifically critiqued the acting of Bonnie Baker and Orrin Tucker as being lackluster, and Jerry Colonna and Edward Everett Horton's roles for engaging in "meaningless and unfunny business".

Vicki is a 1953 American film noir directed by Harry Horner and starring Jeanne Crain and Jean Peters. It was based on the novel I Wake Up Screaming, written by Steve Fisher.

Thank Your Lucky Stars is a 1943 American musical comedy film made by Warner Brothers as a World War II fundraiser, with a slim plot involving theater producers. The stars donated their salaries to the Hollywood Canteen, which was founded by John Garfield and Bette Davis, who appear in this film. It was directed by David Butler and stars Eddie Cantor, Dennis Morgan, Joan Leslie, Edward Everett Horton and S. Z. Sakall.

Disputed Passage is a 1939 American war film starring John Howard, Dorothy Lamour, Akim Tamiroff and Judith Barrett. Set in war-torn China, the film was described by The New York Times as a "lavish soap opera". The film was based on the best-selling novel of the same name by Lloyd C. Douglas, and was produced by Paramount Pictures. 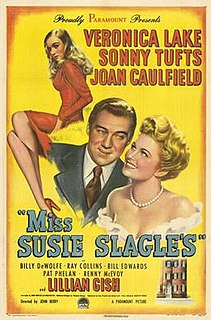 Bonnie Baker(néeEvelyn Underhill or Nelson, April 1, 1917 – August 11, 1990) was an American singer of jazz and popular music and was known from 1936 to the end of her performing career as Wee Bonnie Baker. Her biggest hit was "Oh Johnny, Oh Johnny, Oh!," recorded with the Orrin Tucker Orchestra in 1939.

Paris Honeymoon is a 1939 American musical film directed by Frank Tuttle and written by Frank Butler and Don Hartman. The film stars Bing Crosby, Franciska Gaal, Akim Tamiroff, Shirley Ross, Edward Everett Horton and Ben Blue. Filming took place in Hollywood from May 23 to July 1938 and the film was released on January 27, 1939 by Paramount Pictures.

Ice-Capades is a 1941 American comedy film directed by Joseph Santley and starring James Ellison, Phil Silvers, and Barbara Jo Allen. Its score, composed by Cy Feuer, was nominated for the Best Scoring of a Musical Picture. The film's sets were designed by the art director John Victor Mackay. It marked the screen debuts for the ice skaters Belita and Vera Ralston, both of whom went on to star in a number of films at Monogram and Republic respectively. 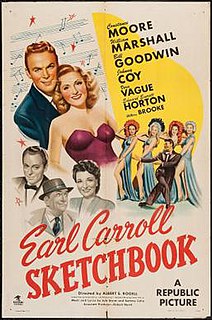 The Marriage-Go-Round is a 1961 DeLuxe Color CinemaScope American comedy film directed by Walter Lang and written by Leslie Stevens. It is based on the 1958 play The Marriage-Go-Round, also penned by Stevens. The film stars Susan Hayward, James Mason, Julie Newmar, Robert Paige and June Clayworth. It was released on January 6, 1961 by 20th Century Fox.