100 Grand is an American game show hosted by Jack Clark. The series ran for three episodes, weekly on Sunday nights from September 15 to 29, 1963 on the highly touted "New ABC" as the network's attempt to bring back high-stakes game shows after the quiz show scandals of 1958.

When 100 Grand made its debut, it had been two years since the last quiz show with a five-figure cash prize or higher ( You Bet Your Life on NBC) had aired on any broadcast network; it would be over a decade before six-figure jackpots returned to television game shows. (Large jackpots were still seen at the time on bowling shows, such as NBC's Jackpot Bowling and ABC's own Make That Spare , both of which regularly offered jackpots over $10,000, and on The Price Is Right , which moved to ABC in 1963 and had largely been spared by the scandals.)

One contestant, having possessed a knowledge or lead in a specific subject or field, asked questions of a professional on that same subject for cash. The player who stumped the professional for five weeks, had the show survived that long, would have had the privilege to answer five questions submitted by home viewers, and ended up with a grand total of $100,000 if successful.

Only two contestants appeared on the series – one questioning a Civil War expert, the other questioning an opera expert. On the third show, both professionals stumped the amateurs, both of whom were awarded $1,000 savings bonds while the professionals each won $10,000.

The series is believed to be destroyed through wiping. A promotional video featuring the set and a contestant exists, traded among private collectors. 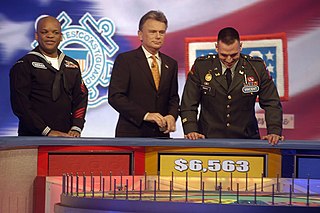 A game show is a type of radio, television or stage show where contestants regularly compete for a reward. The history of game shows dates back to the invention of television as a medium. On most game shows, contestants either have to answer questions or solve puzzles, typically to win either money or prizes. Game shows often reward players with prizes such as cash, trips and goods and services provided by the show's sponsor.

The American quiz show scandals of the 1950s were a series of revelations that contestants of several popular television quiz shows were secretly given assistance by show producers, to prearrange the outcome of ostensibly fair competitions. The 1950s quiz show scandals were driven by a variety of reasons, including greed, willing contestants, and the lack of regulations prohibiting such conspiracy in game show productions.

The $64,000 Question is an American game show broadcast in primetime on CBS-TV from 1955 to 1958, which became embroiled in the 1950s quiz show scandals. Contestants answered general knowledge questions, earning money which doubled as the questions became more difficult. The final question had a top prize of $64,000, hence the "$64,000 Question" in the show's title.

Sale of the Century is an American television game show that debuted in the United States on September 29, 1969, on NBC daytime. It was one of three NBC game shows to premiere on that date, the other two being the short-lived game shows Letters to Laugh-In and Name Droppers. The series aired until July 13, 1973, and a weekly syndicated series began that fall and ran for one season. Actor Jack Kelly hosted the series from 1969 to 1971, then decided to return to acting full-time. He was replaced by Joe Garagiola, who hosted the remainder of the daytime series plus the one season in syndication. 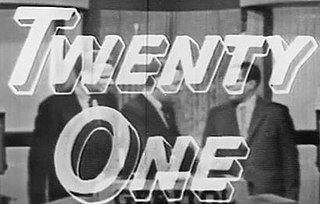 Twenty-One is an American game show originally hosted by Jack Barry that aired on NBC from 1956 to 1958. Produced by Jack Barry-Dan Enright Productions, two contestants competed against each other in separate isolation booths, answering general-knowledge questions to earn 21 total points. The program became notorious when it was found to be rigged as part of the 1950s quiz show scandals, which nearly caused the demise of the entire genre in the wake of United States Senate investigations. The 1994 movie Quiz Show is based on these events. A new version of the show aired on NBC in 2000 with Maury Povich as host. 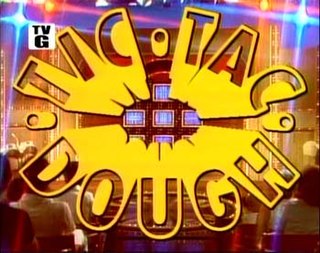 Who Wants to Be a Millionaire? is a British television quiz show, created and formerly produced by David Briggs, and made for the ITV network. On air since September 1998 and devised by Briggs, the show's format sees contestants taking on multiple-choice questions based upon general knowledge, winning a cash prize for each question they answer correctly, with the amount offered increasing as they take on more difficult questions. If an incorrect answer is given, the contestant will leave with whatever cash prize is guaranteed by the last safety net they have passed. However, a contestant can decline to answer a question, and thus walk away with their full winnings. Contestants are given "lifelines" to help answer questions. 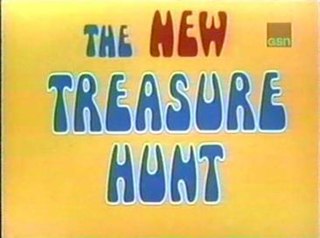 Treasure Hunt, also known as The New Treasure Hunt during its 1970s run, is an American television game show that aired throughout the 1950s, 1970s, and 1980s. In the show, contestants selected a mystery package in the hopes of winning cash or prizes. 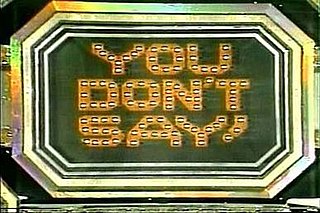 You Don't Say! is an American television game show that had three separate runs on television. The first version aired on NBC daytime from April 1, 1963 to September 26, 1969 with revivals on ABC in 1975 and in syndication from 1978 to 1979. The last two incarnations were executive produced by Ralph Andrews and produced and directed by Bill Carruthers.

Blank Check is an American game show that aired on NBC from January 6 to July 4, 1975. It was promoted as "television's first ESP game". Art James was host, with Johnny Jacobs as announcer.

Make That Spare is a fifteen-minute bowling program that was broadcast on ABC from October 8, 1960, to September 11, 1964.

A game show is a type of radio, television, or internet program in which contestants, television personalities or celebrities, sometimes as part of a team, play a game which involves answering trivia questions or solving puzzles, usually for prizes. Game shows are usually distinguishable from reality television competition shows, in which the competition consumes an entire season of episodes; in a game show, prizes can typically be won in a single match. Beginning with the first five-figure and six-figure game show jackpots in the mid-1950s, a succession of contestants on various quiz shows of the era each set records. Teddy Nadler of The $64,000 Challenge, the highest-scoring contestant of the 1950s era, was not surpassed until 1980, when Thom McKee won $312,700 on Tic-Tac-Dough. Between 1999 and 2001, during a brief boom in high-stakes game shows, the record was broken six times. Both the 1955–1958 and 1999–2001 eras of rapidly set and broken records were driven primarily by one-upmanship between the networks each trying to secure bragging rights and ratings by inflating their prize offerings, rather than the merits of the contestants themselves. American daytime television has historically had smaller prize budgets for game shows that air in that daypart.

Duel is an American game show hosted by Mike Greenberg that first aired from December 17 to December 23, 2007 on ABC. The show aired as a week-long six-episode tournament at 8:00 p.m. from Monday through Friday with the finale on Sunday.

Break the Bank is an American quiz show which aired variously on Mutual Radio and ABC, CBS and NBC television from 1945 to 1957. From October 1956 to January 1957, NBC Television aired a short-lived prime-time version called Break the $250,000 Bank.

Break the Bank is an American game show created by Jack Barry and Dan Enright and produced by their production company, Barry & Enright Productions. It was the first game show packaged by Barry and Enright as a tandem since their fall from grace following the 1950s quiz show scandals. 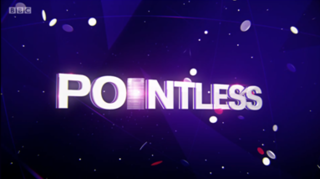 Pointless is a British television quiz show produced by Banijay subsidiary Remarkable Television for the BBC. It is hosted by Alexander Armstrong with assistance from Richard Osman. In each episode four teams of two contestants attempt to find correct but obscure answers to four rounds of general knowledge questions, with the winning team eligible to compete for the show's cash jackpot. All questions used on the show are factual in nature, and are asked of a panel of 100 individuals in a pre-conducted public survey. Contestants seek to find correct answers that were given by as few of the survey subjects as possible ("points"); each round is won by the team with the fewest points. "Pointless" answers, given by nobody, score zero points, the best score. Every pointless answer given during the main game increases the jackpot by £250, and one such answer must be given in the final round in order to win it.