14 October is an Arabic daily newspaper published in Aden, Yemen.

14 October was started in 1968. [1] The paper was named after the revolution in the South of Yemen on 14 October 1967. [2] It is published in Arabic and is headquartered in Aden. [3] It was formerly run by the government of South Yemen before the reunification in 1990. [4] It is currently run by the state of Yemen [5] [6] and its publisher is the 14th October Foundation for Journalism, Printing and Publishing. [2] Ahmed Mohammed Alhubaishi is the editor-in-chief of the daily. [4]

Yemen, sometimes spelled Yaman, officially the Republic of Yemen, is a country at the southern end of the Arabian Peninsula in Western Asia. It is the second-largest Arab sovereign state in the peninsula, occupying 527,970 square kilometres. The coastline stretches for about 2,000 kilometres. It is bordered by Saudi Arabia to the north, the Red Sea to the west, the Gulf of Aden and Guardafui Channel to the south, and Oman to the east. Yemen's territory encompasses more than 200 islands, including the Socotra islands in the Guardafui Channel. Yemen is a member of the Arab League, United Nations, Non-Aligned Movement and the Organisation of Islamic Cooperation. Yemen is characterized as a failed state with high necessity of transformation. 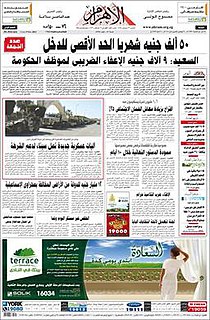 Al-Ahram, founded on 5 August 1875, is the most widely circulating Egyptian daily newspaper, and the second oldest after al-Waqa'i`al-Masriya. It is majority owned by the Egyptian government.

The Yemen Times is unified Yemen's first and most widely read independent English-language newspaper. The paper is published twice-weekly and has its own printing press, advertising associates and news service. 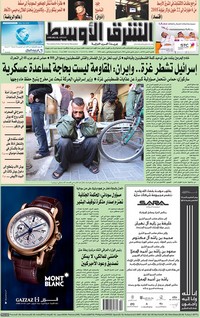 Asharq al-Awsat is an Arabic international newspaper headquartered in London. A pioneer of the "off-shore" model in the Arabic press, the paper is often noted for its distinctive green-tinted pages.

Sudan has many local and national newspapers. The major national dailies are published in Arabic or English. Sudan Television broadcasts sixty hours of programming a week. The Sudan National Broadcasting Corporation airs radio programming in Arabic, English, French, and Swahili. Radio and television stations are state-controlled entities and serve as outlets for the government viewpoint. Journalists and the papers they serve, although subject to government censorship, operate with more freedom and independence than in most neighboring countries or Arab states. The Voice of Sudan, sponsored by the National Democratic Alliance, broadcasts in Arabic and English. The opposition Sudan People's Liberation Army issues its own newspapers and journals.

As-Safir, meaning The Ambassador, was a leading Arabic-language daily newspaper in Lebanon. The headquarters of the daily is in Beirut. It has been in circulation from March 1974 until December 2016. The last issue of the paper was published on 31 December 2016. The online version was also closed on the same date.

Al-Ittihad is an Arabic language newspaper published daily in the United Arab Emirates. The paper is the first regular publication of the country.

Yemen's Ministry of Information influences the media through its control of printing presses, granting of newspaper subsidies, and ownership of the country’s only television and radio stations. Yemen has nine government-controlled, 50 independent, and 30 party-affiliated newspapers. There are approximately 90 magazines, 50 percent of which are private, 30 percent government-controlled, and 20 percent party-affiliated. The government controls the content of news broadcasts and edits coverage of televised parliamentary debates. 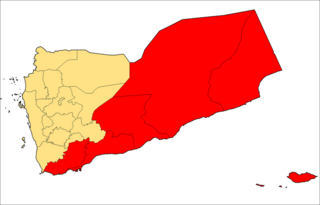 The South Yemen insurgency is a term used by the Yemeni government to describe the protests and attacks on government forces in southern Yemen, ongoing since 27 April 2009. Although the violence has been blamed on elements within the southern secessionist movement, leaders of the group maintain that their aims of independence are to be achieved through peaceful means, and claim that attacks are from ordinary citizens in response to the government's provocative actions. The insurgency comes amid the Shia insurgency in the country's north as led by the Houthi communities. Southern leaders led a brief, unsuccessful secession in 1994 following unification. Many of them are involved in the present secession movement. Southern separatist insurgents are active mainly in the area of former South Yemen, but also in Ad Dali' Governorate, which was not a part of the independent southern state. They are supported by the United Arab Emirates, even though the UAE is a member of the Saudi Arabian-led coalition working to support the Yemeni government under President Abdrabbuh Mansur Hadi.

Al Ayyam is a Yemeni daily newspaper published in Arabic.

Okaz is an Arabic Saudi Arabian daily newspaper located in Jeddah. The paper was launched in 1960 and its sister publication is Saudi Gazette. The paper is simultaneously printed in both Riyadh and Jeddah and has offices all over Saudi Arabia. However, the daily mainly serves the provinces of the Hejaz and Asir. Abdullah Saleh Kamel is the chairman of the board of directors of the Okaz Organization for Press and Publication. Lawrence Wright of The New Yorker states that Okaz is "like an Arabic version" of the New York Post.

Al Riyadh is a Riyadh-based, pro-government Saudi daily newspaper. Its sister paper was Riyadh Daily that was disestablished on 1 January 2004. Al Riyadh is one of the dominant papers in Nejd.

Al Eqtisadiah is a Saudi daily newspaper, published by Saudi Research and Publishing Company. It is published in Arabic.

Al Jazirah is a daily Arabic newspaper published in Saudi Arabia. Its sister newspaper is Al Masaiya, is the only afternoon newspaper in the country with limited influence and readership.

Al Nadwa was a Mecca-based Arabic daily newspaper published in Saudi Arabia. The daily was published between 1958 and 2013.

Elaph is the first daily Arabic independent online newspaper and is not associated with any established print or broadcast medium.

The media of Bahrain mainly consists of several weekly and daily newspapers, with the Information Affairs Authority controlling Bahrain's state-owned Bahrain Radio and Television Corporation, which broadcasts radio and television services. The media is predominately in Arabic though English language and Malayalam newspapers are beginning to emerge in the country. The IAA also controls the Bahrain News Agency which monitors, originates and relays national and international news in Arabic and English, usually generating from 90 to 150 stories a day. Bahrain Telecommunication Company, trading as Batelco, is Bahrain's sole Internet service provider. In 2015, there were an estimated 1.29 million internet user, a penetration of 96.4%.

Al Sharq is an Arabic and pro-government daily newspaper published in Doha, Qatar. The paper is one of the three leading Arabic newspapers in the country in addition to Al Raya and Al Watan.

Tishreen is one of the state-owned Arabic daily newspapers published in Syria. The daily is based in Damascus.