The Adventure Racing World Series (ARWS) [1] is an endurance racing season where adventure racing teams compete in a range of disciplines including, for example, navigation, trekking, mountain biking, paddling and climbing. [2]

Mixed gender teams of four competitors compete in a series of up to a dozen races held in locations spread across the globe. These races culminate in the staging of the Adventure Racing World Championships, the winner of which is crowned World Champions.

The competition's format provides that each of the individual events of the World Series function as a qualifier for the World Championships. The top two finishing teams in each event secure the opportunity to compete in the World Championships. The field of event winners and second place getters is then supplemented by the reigning world champions, who are given the right to defend their title, and a selection of wild card entrants round out the number of starters.

In addition to the World Championship race, points are assigned to results from each of the qualifying races in the series to determine a World Ranking. Points are allocated on a teams best two results in a calendar year over a two-year period (with heavier weighting given to World Championship results), with the ranking cycle periodically refreshed every 4–6 months.

The Adventure Racing World Championship was the brainchild of Geoff Hunt and Pascale Lorre, long-time adventure racers who sought to "lend badly needed structure to the sport". [3] Hunt and Lorre's vision was first brought to fruition in Switzerland in 2001 where 41 teams contested the Discovery Channel World Championship with the controversy-plagued event eventually won by Finland's Team Nokia Adventure. [3] A team from New Zealand, including Kathy Lynch, came second that year. [4]

After a two-year hiatus the Adventure Racing World Championships was next held in Canada in 2004 and has subsequently been held every year since.

In 2011 management of the series was passed to the Australian company Geocentric Outdoors. [5] The 2011 World Championships - won by Thule Adventure Team - were staged at the XPD Expedition Race in Tasmania, Australia, where 90 teams drawn from 21 countries made for the largest starting field in the event's history. [6] This is testament to the fact that the World Series hosts the very best teams in the world and "continues to grow and become more prominent". [7] Geocentric Outdoors also instigated a number of new initiatives for the world series, including standardized equipment lists and logistics across the races, restrictions on mixed nationality teams at the World Championship race each year as well as the introduction of the World Series ranking system. These initiatives have encouraged larger international fields at the various races by lowering the logistical barriers for participation and rewarding participation in multiple events. 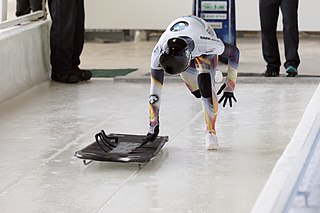 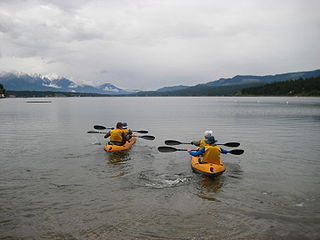 Adventure racing is typically a multi-disciplinary team sport involving navigation over an unmarked wilderness course with races extending anywhere from two hours up to two weeks in length. (What Is Adventure Racing Video) Some races offer solo competition as well. The principal disciplines in adventure racing include trekking, mountain biking, and paddling although races can incorporate a multitude of other disciplines including climbing, abseiling, horse riding, skiing and white water rafting. Teams generally vary in gender mix and in size from two to five competitors, however the premier format is considered to be mixed gender teams of four racers. There is typically no suspension of the clock during races, irrespective of length; elapsed competition time runs concurrently with real time, and competitors must choose if or when to rest.

Formula BMW was a junior racing formula for single seater cars. It was positioned at the bottom of the motorsport career ladder alongside the longer established Formula Ford category. Like Formula Ford, it was intended to function as the young kart racing graduate's first experience of car racing.

Miguel Duhamel is a Canadian former professional motorcycle racer. He is the son of Canadian Motorsport Hall of Fame member Yvon Duhamel. He is the third-winningest rider in the AMA Superbike series with 32 wins. Duhamel was inducted into the AMA Motorcycle Hall of Fame in 2016. 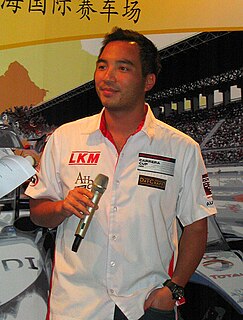 The 1990 CART PPG Indy Car World Series season was the 12th national championship season of American open wheel racing sanctioned by CART. The season consisted of 16 races, and one non-points exhibition event. Al Unser Jr. was the national champion, and the rookie of the year was Eddie Cheever. The 1990 Indianapolis 500 was sanctioned by USAC, but counted towards the CART points championship. Arie Luyendyk won the Indy 500, his first-ever victory in championship-level competition, and the fastest 500 until the 2013 Indianapolis 500.

Frontier Adventure Sports and Training (FAST) is the most establishedneeds citation Adventure Race organizer in Canada, in operation since 1997. Frontier Adventure Sports has established an international reputation for solid logistics and challenging racecourses. FAST hosts events under several banners: the Frontier Adventure Challenge, Raid the North and Raid the North Extreme. These non-stop races range in length from 8 hours to six days and require coed teams of three or four to hike, mountain bike, paddle and negotiate fixed ropes, while navigating an unmarked racecourse through the wilderness.

The ITU World Triathlon Series is the International Triathlon Union's annual series of triathlon events used to crown an annual world champion. There are multiple rounds of competitions culminating in a Grand Final race. Athletes compete head-to-head for points in these races that will determine the overall ITU world champion. The elite championship races are held over two distances the standard and the sprint distance. 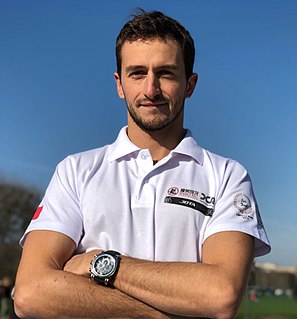 Stéphane Richelmi is a professional racing driver from Monaco. He is the son of former World Rally Championship driver Jean-Pierre Richelmi. 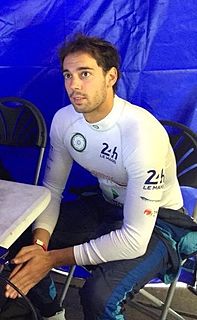 Nathanaël Berthon is a professional racing driver from France.

Nico Müller is a professional racing driver from Switzerland. He is currently competing full-time in the 2019-20 Formula E season driving for GEOX Dragon. 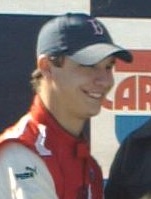 Kevin Swindell is an American racing driver, who has competed in USAC and NASCAR competition. He has won 77 races in various dirt racing series including the Chili Bowl Nationals. Swindell is the son of three time World of Outlaws Sprint Car champion Sammy Swindell.

Kathleen "Kathy" Lynch is a retired competitive cyclist from New Zealand who competed both on and off the road. With a talent for multiple sports disciplines, she won the canoeing events New Zealand White Water Downriver and Slalom Championships in 1987 and represented her country at the 1988 Canoe Slalom World Cup. Around the same time, she was also a successful triathlete, but did not continue with that sport. She bought her first mountain bike in 1988 at the age of 31 in order to compete in an adventure sport event, and within a year she had become the New Zealand national cross country champion. Around the same time, she also took up road cycling. She was included in the New Zealand team for the 1990 Commonwealth Games and was assigned as domestique for the top New Zealand road rider, Madonna Harris. Harris and Lynch finished in fourth and ninth places respectively. In September 1990, Lynch competed at the inaugural UCI Mountain Bike World Championships and finished tenth. In November 1990, she became a household name in New Zealand by winning a 22-day multi-sport race the length of the country that had prime time TV coverage every night.