Anne-Marie Withenshaw is a Canadian television and radio personality, from Montreal, Quebec, Canada. [1] [2]

Withenshaw graduated from Concordia University [3] with a Bachelor of Arts & Science in Communications Studies.

She started working on MuchMusic's French sister station, MusiquePlus, [4] as a VJ in 1998, and remained there until 2002. While at MusiquePlus, she hosted Fax, a weekly music news show, L'Artiste du Mois, and Buzzé le Quiz Rock, a music game show.

She then moved on to French Canadian network television, as a reporter on TQS' daily entertainment program Flash. After leaving Flash in 2005 to host La Fosse Aux Lionnes, a daily current affairs talk-show on Radio-Canada (SRC-CBC) for one season, she returned to Flash as the new host in the fall of 2006. The show was a daily 30 minute entertainment program offering a mix of local and international stories in both French and English. Although the show aired live from TQS' studios, she often hosted the show from various locations abroad, such as movie premieres, The Oscars, The Grammys or the Cannes Film Festival.[ citation needed ]

Parallel to her TV career, she has worked as a radio host since 1997. From 1999 to 2005, she hosted the weekly countdown show on the NRJ network. In 2007, she hosted a daily radio show called Le Withenshow on CKOI-FM 96.9 FM. Until 2010, she was a part of the CKOI-FM morning shows Juste pour le fun and Midi Morency. In the summer of 2010, she began hosting AM on Radio-Canada (SRC-CBC), a daily radio talk show airing nationally.[ citation needed ]

From 2009 to 2014 she hosted a weekly English-language entertainment show called All-Access Weekend on CKBE-FM, in which she interviewed celebrities from the world of music, fashion, film and sports. [9] In November 2014, the show was cancelled, and Withenshaw sued the station over alleged breach of contract. [10]

V is a Canadian French-language terrestrial television network. The network has five owned-and-operated and three affiliated stations throughout Quebec, although it can also be seen over-the-air in some bordering markets in the provinces of Ontario and New Brunswick. It can also be received in some other parts of Canada on cable television or direct broadcast satellite.

Mitsou Annie Marie Gélinas is a Canadian pop singer, businesswoman, television and radio host, and actress. She is credited as Mitsou Gélinas when acting, but records simply as Mitsou.

Cogeco Inc. is a Canadian telecommunications and media company headquartered in Montreal, Quebec, which serves residential and commercial customers through various subsidiaries. The company provides cable television, telephone, and Internet connectivity services to consumers in parts of Ontario, Quebec, and some regions of the United States. Its subsidiaries operate radio stations and a public transit advertising company in Nova Scotia, as well as possible business telecommunications and information technology services through its fibre-optic and data centre network. Cogeco is an acronym for Compagnie Générale de Communication.

CKBE-FM is an English language Canadian radio station located in Montreal, Quebec. It is owned and operated by Cogeco and airs a Rhythmic Adult Contemporary format.

CKOI was a network of French-language adult top 40 outlets broadcasting throughout the province of Quebec. Created by Corus Québec on November 6, 2009, the network and its stations are currently owned and operated by Cogeco.

Rythme FM is a network of French-language adult contemporary FM radio stations broadcasting in most major markets of Quebec. The network was created and owned by Cogeco.

Anthony Kavanagh is a Haitian French stand up comedian, actor, singer and TV presenter. After a successful career on the francophone stand-up scene in Quebec, he became a major star in France, where he was originaly born and now a popular television host.

Jean-Luc Mongrain is a Canadian journalist, television host and news anchor. He is currently the news anchor of his own show called Mongrain on LCN.

This is a list of media in Sherbrooke, Quebec.

Laura l'immortelle is a novel by Marie-Pier Côté, a Québécois Canadian author. The book was published by Les Éditions des Intouchables on January 17, 2007. 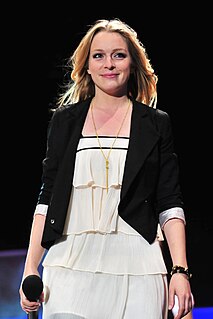 Annie Villeneuve is a French-Canadian pop singer-songwriter. She participated at the first season of Star Académie in 2003. She also sang the French and the bilingual official song of the 2010 Vancouver Olympics, I Believe/J'imagine.

Gilles Proulx is a historian, radio and television host in the province of Quebec, Canada. His radio career began in 1962, and he would retire as talk radio host on CHMP-FM forty-six years later on August 7, 2008. His brother, Jacques Proulx was the former morning man of another local station CKAC.

Laurent Paquin, is a comedian and radio personality from Quebec.

Isabelle Racicot, is a Canadian television and radio host in Canada. 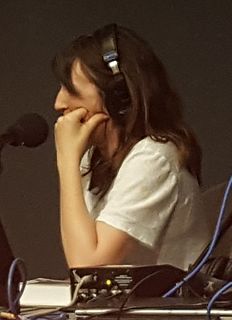 Marie-Louise Arsenault is a Canadian radio personality, who hosts the literary talk show Plus on est de fous, plus on lit! on Ici Radio-Canada Première. In this role, she was also the moderator of the final three editions of Le Combat des livres.