Archer Mayor is the author of the Joe Gunther detective series. Archer is a Yale graduate and lives in Newfane, Vermont, United States.

Before turning to popular fiction, Mayor held several jobs, both in the US and in France, working as an editor, researcher for Time–Life books, photographer and journalist. He also worked for the University of Texas Press in the late 1970s, where, as Special Projects Editor, he found and caused to be published The Book of Merlyn , the hitherto barely known conclusion to T. H. White's famous The Once and Future King .

Mayor's first novel, Open Season, was published in 1988, and was the first of his popular Joe Gunther mystery series. Since then, a new novel has been published every year, typically in the fall. Mayor devotes much of the year researching various components of his novel, in addition to working as a death investigator for the Vermont State Medical Examiner's office and as a deputy for the Windham County Sheriff's Dept. He also volunteers for his local Fire Department and EMT squad.

Jeffrey Howard Archer, Baron Archer of Weston-super-Mare is an English novelist, former politician, convicted perjurer, and peer of the realm. Before becoming an author, Archer was a Member of Parliament (1969–1974), but did not seek re-election after a financial scandal that left him almost bankrupt. He revived his fortunes as a best-selling novelist; his books have sold more than 320 million copies worldwide.

Piers Anthony Dillingham Jacob is an English-American author in the science fiction and fantasy genres, publishing under the name Piers Anthony. He is most famous for his long-running novel series set in the fictional realm of Xanth. 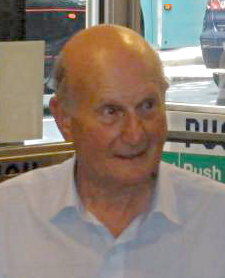 Gerry Anderson was an English television and film producer, director, writer and occasional voice artist. He remains famous for his futuristic television programmes, especially his 1960s productions filmed with "Supermarionation". 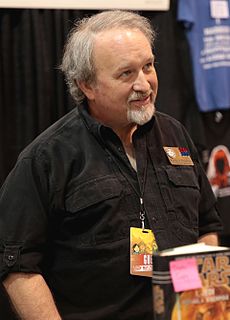 Michael Austin Stackpole is an American science fiction and fantasy author best known for his Star Wars and BattleTech books. He was born in Wausau, Wisconsin, but raised in Vermont. He has a BA in history from the University of Vermont. From 1977 on, he worked as a designer of role-playing games for various gaming companies, and wrote dozens of magazine articles with limited distribution within the industry. He lives in Scottsdale, Arizona. 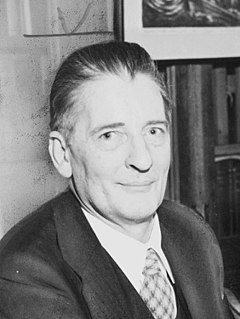 Larry Jeff McMurtry was an American novelist, essayist, bookseller, and screenwriter whose work was predominantly set in either the Old West or contemporary Texas. His novels included Horseman, Pass By (1962), The Last Picture Show (1966), and Terms of Endearment (1975), which were adapted into films. Movies adapted from McMurtry's works earned 34 Oscar nominations.

Dennis Wayne Archer is an American lawyer, jurist and former politician from Michigan. A Democrat, Archer served on the Michigan Supreme Court and as mayor of Detroit. He later served as president of the American Bar Association, becoming the first black president of the organization, which, until 1943, had barred African-American lawyers from membership. 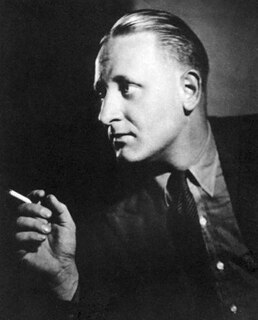 John Gunther was an American journalist and author. 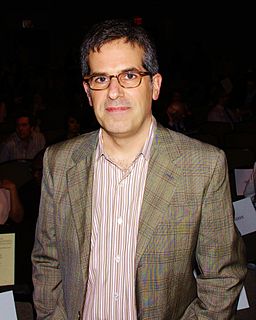 Jonathan Allen Lethem is an American novelist, essayist, and short story writer. His first novel, Gun, with Occasional Music, a genre work that mixed elements of science fiction and detective fiction, was published in 1994. In 1999, Lethem published Motherless Brooklyn, a National Book Critics Circle Award-winning novel that achieved mainstream success. In 2003, he published The Fortress of Solitude, which became a New York Times Best Seller. In 2005, he received a MacArthur Fellowship. Since 2011, he has taught creative writing at Pomona College. 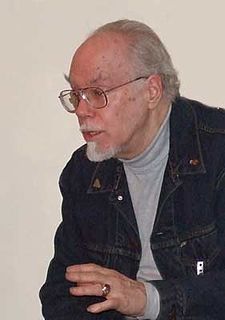 Theodore Edwin White is a Hugo Award-winning American science fiction writer, editor and fan, as well as a music critic. He writes and edits as Ted White. In addition to books and stories written under his own name, he has also co-authored novels with Dave van Arnam as Ron Archer, and with Terry Carr as Norman Edwards.

Charles Elgin Alverson was an American novelist, editor and screenwriter who sometimes used the byline Chuck Alverson. He co-scripted the film Jabberwocky (1977).

St. John Publications was an American publisher of magazines and comic books. During the 1947-1958 existence of its comic-book division, St. John established several industry firsts. Founded by Archer St. John, the firm was located in Manhattan at 545 Fifth Avenue. After the St. John comic books came to an end in 1958, the company continued to publish its magazine line into the next decade. Flying Eagle Publications was a magazine affiliate of St. John Publications. Comic book imprints included Approved Comics, Blue Ribbon, and Jubilee Publications.

Dan Daniel, born Daniel Margowitz, was an American sportswriter whose contributions over a long period led him to be called "the dean of American baseball writers".

Joe Gunther is the hero of Archer Mayor's long-running mystery novel series set largely in Brattleboro, Vermont. When the series begins, Gunther has already worked as a police officer for 30 years and is an experienced police lieutenant, eventually working for the fictitious Vermont Bureau Of Investigation (VBI). He is a Korean War veteran and a widower.

Comics journalism or graphic journalism is a form of journalism that covers news or nonfiction events using the framework of comics, a combination of words and drawn images. Typically, sources are actual people featured in each story, and word balloons are actual quotes. The term "comics journalism" was coined by one of its most notable practitioners, Joe Sacco.

Philip ("Phil") E. Baruth is an American politician, novelist, biographer, professor, and former radio commentator from Vermont. A Democrat and member of the Vermont Progressive Party, he represents Chittenden County in the Vermont Senate. He served as Majority Leader from 2013 to 2017, when he endorsed his successor, Becca Balint.