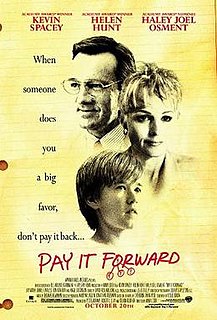 Pay It Forward is a 2000 American drama film directed by Mimi Leder. The film is based loosely on the novel of the same name by Catherine Ryan Hyde. It is set in Las Vegas, and it chronicles 12-year-old Trevor McKinney's launch of a goodwill movement known as "pay it forward". It stars Haley Joel Osment as Trevor, Helen Hunt as his alcoholic single mother Arlene McKinney, and Kevin Spacey as his physically and emotionally scarred social studies teacher Eugene Simonet.

Marsha Hunt is an American actress, novelist, singer and former model, who has lived mostly in Britain and Ireland. She achieved national fame when she appeared in London as Dionne in the long-running rock musical Hair. She enjoyed close relationships with Marc Bolan and Mick Jagger, who is the father of her only child Karis.

Jeffery Deaver is an American mystery and crime writer. He has a bachelor of journalism degree from the University of Missouri and a J.D. degree from Fordham University and originally started working as a journalist. He later practiced law before embarking on a career as a novelist. He has been awarded the Steel Dagger and Short Story Dagger from the British Crime Writers' Association and the Nero Wolfe Award, and he is a three-time recipient of the Ellery Queen Reader's Award for Best Short Story of the Year and a winner of the British Thumping Good Read Award. His novels have appeared on bestseller lists around the world, including The New York Times, The Times, Italy's Corriere della Sera, The Sydney Morning Herald, and The Los Angeles Times.

Undertow may refer to: 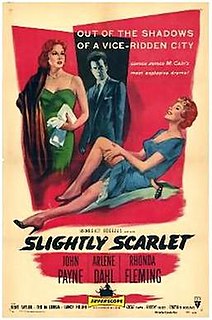 Slightly Scarlet is a 1956 Technicolor film noir crime film based on James M. Cain's novel Love's Lovely Counterfeit. It was directed by Allan Dwan, and its widescreen cinematography was by John Alton.

Arlene Isabel Foster PC is a Northern Irish politician serving as First Minister of Northern Ireland since January 2020, and previously from 2016 to 2017. She has served as Leader of the Democratic Unionist Party (DUP) since 2015 and Member of the Northern Ireland Assembly (MLA) for Fermanagh and South Tyrone since 2003. 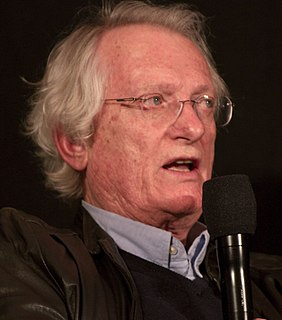 Peter Temple was an Australian crime fiction writer, mainly known for his Jack Irish novel series. He won several awards for his writing, including the Gold Dagger in 2007, the first for an Australian.

The Doom novel series is a series of four near-future science fiction novels co-written by Dafydd ab Hugh and Brad Linaweaver; Knee-Deep in the Dead, Hell on Earth, Infernal Sky, and Endgame. The series is initially based on the Doom and Doom II: Hell on Earth first-person shooter video games created by Id Software, although there are multiple departures from the game in the first two novels, and the second two continue in an independent direction to the games' storylines. The novels are primarily written from the first-person perspective of Flynn Taggart, a corporal assigned to Fox Company of United States Marine Corps, although the perspective changes from character to character in the second and third novel. 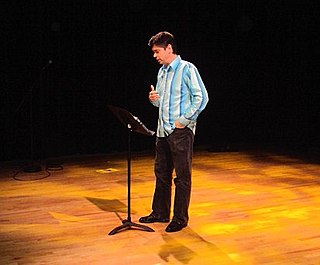 Shane Peacock is a Canadian novelist, playwright, journalist, and television screenwriter. His first book The Great Farini was a biography of the colourful Canadian personality William Leonard Hunt. His plays have been produced by the 4th Line Theatre; his documentaries have included Team Spirit, aired on the CTV national network, and among his novels are Last Message, part of the Seven Series for young readers; Double You, its sequel; and Separated, its prequel.

The Irish Book Awards are Irish literary awards given annually to books and authors in various categories. In 2018 An Post took over sponsorship of the awards from Bord Gais Energy. It is the only literary award supported by all-Irish bookstores. First awarded in 2006, they grew out of the Hughes & Hughes bookstore's Irish Novel of the Year Prize which was inaugurated in 2000. Since 2007 the Awards have been an independent not-for-profit company funded by sponsorship. The primary sponsor is An Post, the state owned postal service in Ireland. There are currently nine categories, seven of which are judged by the Irish Literary Academy, two by a public vote. There is also a lifetime achievement award.

Colin W. Sargent, Ph.D., is an American author, magazine publisher, and playwright. His best-known works include his debut novel Museum of Human Beings, included in the National American Indian Heritage Month Booklist, which delves into the heart-wrenching life of Jean-Baptiste Charbonneau, the son of Sacagawea; the play 100 Percent American Girl; and poetry books Luftwaffe Snowshoes, Blush, and Undertow. His novel, The Boston Castrato, was published in 2016 by Barbican Press of London and Hull, UK. According to London's Morning Star: "An extraordinary literary expression of the American nightmare." His newest book, Red Hands, is an account of the Romanian revolution in the voice of Nicolae Ceaușescu’s daughter-in-law. The novel is derived from eight hundred hours of unique interviews with Iordana Ceaușescu, and told in her voice. It's due for release Summer 2020.

Peter Robert Corris was an Australian academic, historian, journalist and a novelist of historical and crime fiction. As crime fiction writer, he was described as "the Godfather of contemporary Australian crime-writing", particularly for his Cliff Hardy novels. 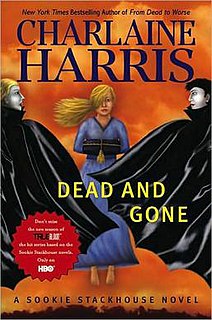 Dead and Gone is the ninth book in Charlaine Harris's series The Southern Vampire Mysteries. This title was released on May 5, 2009. 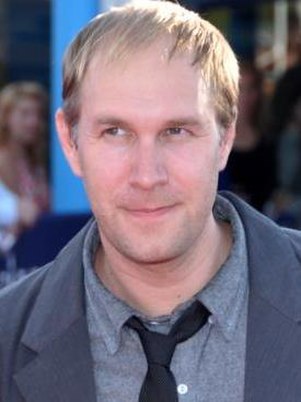 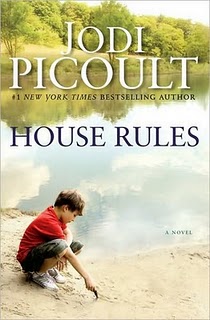 House Rules (2010) is the eighteenth novel by the American author, Jodi Picoult. The novel focuses on a young adult male, Jacob Hunt, with Asperger's syndrome living in Townsend, Vermont, who is accused of murder. The novel follows the struggle between Jacob and his family, the law, and his disability.

Tony Bailie is a novelist, and journalist from Downpatrick, County Down, Northern Ireland.

The Shirley Jackson Awards are literary awards named after Shirley Jackson in recognition of her legacy in writing. These awards for outstanding achievement in the literature of psychological suspense, horror and the dark fantastic are presented at Readercon, an annual conference on imaginative literature. 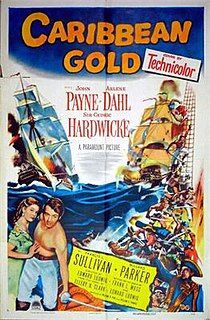 Hopeless is the sixth episode of the fifth season of HBO's original series True Blood and the 54th episode overall. It was first shown on TV on July 15, 2012 and was directed by Dan Attias and written by Alan Ball, creator of the series. The episodes of the series are based on the Charlaine Harris books, The Sookie Stackhouse novels whereas the episodes of the season are based on the fifth book in the series Dead As a Doornail (book) which follows the Shifters being murdered whereas in the season fang bangers and shifters are being hunted. Even so, the plot of the book is only one of the minor subplots. The episode primarily follows Bill and Eric who must now face Russell again after Roman is killed by him; Sookie and Jason go to a faery club where their family's dark history and greatest secrets are revealed to them. Meanwhile, Sam volunteers to assist Andy with a case. The episode was precceeded by Let's Boot and Rally and was followed by In the Beginning, which picks up the events of Hopeless. The episode received fair reviews from critics. The episode ended several minutes earlier than the timeslot filled, as it was about 50 minutes or so, which notably also happened in Let's Boot and Rally. Stephen Moyer will pick up the events of In the Beginning. As of 2012 the episode has received the most ratings only behind by the season premiere episode Turn, Turn, Turn!