Arlotto of Prato [1] (died 1286) was an Italian Franciscan theologian. He became Minister General of the Order of Friars Minor at the end of his life. 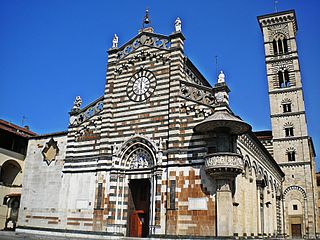 Prato is a city and comune in Tuscany, Italy, the capital of the Province of Prato. The city is at the foot of Monte Retaia, elevation 768 metres (2,520 ft), the last peak in the Calvana chain. The lowest elevation in the comune is 32 metres (105 ft), near the Cascine di Tavola, and the highest is the peak of Monte Cantagrillo at 818 metres (2,684 ft). The Bisenzio, a tributary of the Arno, flows through it.

Arlotto is known also for the Quaestio de Aeternitate Mundi, and as a Biblical scholar. He compiled a Bible concordance, of the Latin Vulgate. This is sometimes cited as the first such. It was in fact based on an earlier thirteenth century work of Hugh of St. Cher. The Jewish Encyclopedia states that Arlotto's work was then used as a model for a Hebrew Bible concordance, by Isaac Nathan ben Kalonymus. [2]

A Bible concordance is a concordance, or verbal index, to the Bible. A simple form lists Biblical words alphabetically, with indications to enable the inquirer to find the passages of the Bible where the words occur.

Isaac Nathan ben Kalonymus was a French Jewish philosopher and controversialist. He lived at Arles, perhaps at Avignon also, and in other places, in the fourteenth and fifteenth centuries.

Concordance may refer to: 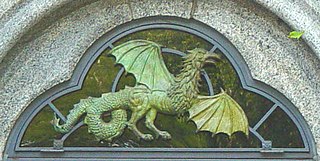 A cockatrice is a mythical beast, essentially a two-legged dragon or serpent-like creature with a rooster's head. Described by Laurence Breiner as "an ornament in the drama and poetry of the Elizabethans", it was featured prominently in English thought and myth for centuries. 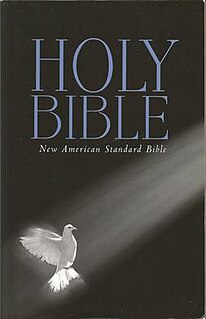 The New American Standard Bible (NASB) is an English translation of the Bible by the Lockman Foundation. The New Testament was first published in 1963, and the complete Bible in 1971. The most recent edition of the NASB text was published in 1995.

The Exhaustive Concordance of the Bible, generally known as Strong's Concordance, is a Bible concordance, an index of every word in the King James Version (KJV), constructed under the direction of James Strong. Strong first published his Concordance in 1890, while professor of exegetical theology at Drew Theological Seminary.

A Complete Concordance to the Holy Scriptures, generally known as Cruden's Concordance, is a concordance of the King James Bible (KJV) that was singlehandedly created by Alexander Cruden (1699–1770). The Concordance was first published in 1737 and has not been out of print since then. Two editions of the Concordance appeared during his lifetime, 1761 and 1769. (Reference 1955 edition) Cruden's concordance was first published in 1737, one of the first copies being personally presented to Queen Caroline on November 3, 1737. Cruden began work on his concordance in 1735 whilst a bookseller in London. Cruden worked alone from 7am to 1am every day and completed the bulk of the work in less than a year. The proofreading and layout took a little longer. His brain was occupied with nothing else, so much so that he failed to notice the diminishing stock in his bookshop and the consequent lack of custom. "Was there ever, before or since the year 1737", writes his biographer Edith Olivier, "another enthusiast for whom it was no drudgery, but a sustained passion of delight, to creep conscientiously word by word through every chapter of the Bible, and that not once only, but again and again?".

Samuel Newman was a clergyman in colonial Massachusetts whose concordance of the Bible, published first in London in 1643, far surpassed any previous work of its kind. 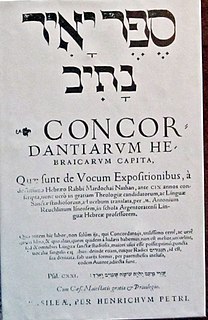 A concordance is an alphabetical list of the principal words used in a book or body of work, listing every instance of each word with its immediate context. Only works of special importance have had concordances prepared for them, such as the Vedas, Bible, Qur'an or the works of Shakespeare, James Joyce or classical Latin and Greek authors, because of the time, difficulty, and expense involved in creating a concordance in the pre-computer era.

Avraham Even-Shoshan was a Russian-born Hebrew linguist and lexicographer, compiler of the Even-Shoshan dictionary, one of the foremost dictionaries of the Hebrew language.

James Strong was an American Methodist biblical scholar and educator, and the creator of Strong's Concordance.

The Shalshelet is a cantillation mark found in the Torah. It is one of the rarest used, occurring just four times in the entire Torah, in Genesis 19:16, 24:12, and 39:8, and in Leviticus 8:23. The four words accented with the shalshelet mark all occur at the beginning of the verse.

The Apostolic Bible Polyglot (ABP), originally published in 2003 is a Bible translation by Charles VanderPool. The ABP is an English translation with a Greek interlinear gloss and is keyed to a concordance. The numbering system, called "AB-Strong's", is a modified version of Strong's concordance, which was designed only to handle the traditional Hebrew Masoretic Text of the Old Testament, and the Greek text of the New Testament. Strong's concordance doesn't have numbering for the Greek O.T. The ABP utilizes a Greek Septuagint base for the O.T. and, therefore, required a modified system. The numbers and the Greek word appear immediately above the English translation instead of side-by-side, as is common in many interlinears.

Zakef Gadol is a cantillation mark that is commonly found in the Torah and Haftarah. It is represented by a vertical line on the left and two dots one on top of the other on the right.

The Rivia is a cantillation mark commonly found in the Torah, Haftarah, and other biblical texts.

Darga is a cantillation mark commonly found in the Torah, Haftarah, and other books. The symbol for the Darga resembles a backwards Z.

Segol, is a cantillation mark found in the Torah, Haftarah, and other books of the Hebrew Bible. The Segol occurs together with a preceding Zarka, sometimes with a Munach preceding one or both.

Geresh is a cantillation mark found in the Torah, Haftarah, and other books of the Hebrew Bible. It is most often found together with the Kadma, in which case the pair is known as Kadma-V'Azla, but it can also be found independently, in which case it is referred to as Azla Geresh or simply as Geresh.

Arlotto Mainardi (1396–1484), known variously as Pievano Arlotto or Piovano Arlotto, was a priest known for jests and "pleasantries." The Motti e facezie del Piovano Arlotto, by an anonymous friend, recorded many of these. He had friends among the Florentine elite and the sometimes ribald stories involving him appealed to many listeners.