As of December 2015, the label had won the "Best Global Record Label" award for five years in a row at the International Dance Music Awards (IDMA's). [2] Armada received two nominations at the 2014 IDMAs. [4] The Academy of Electronic Music, a joint venture between Armada, Google, Point Blank, and DJ Mag , was the recipient of the 'People's Voice Award' at the 2014 Webby Awards. [5] In 2016, Armada Music was one of the 21 labels nominated for the IMPALA FIVEUNDERFIFTEEN [6] campaign shining a light on Europe's most inspiring young labels. The label received the IMPALA Young Label Spotlight Award. [7]

Note: These are artists who have released tracks through the label, including artists that were previously signed by the label.

Armin Jozef Jacobus Daniël van Buuren is a Dutch DJ and record producer from Leiden, South Holland. Since 2001, he has hosted A State of Trance (ASOT), a weekly radio show, which is broadcast to nearly 40 million listeners in 84 countries on over 100 FM radio stations. According to DJs and Festivals, "the radio show propelled him to stardom and helped cultivate an interest in trance music around the world."

Jochen van der Steijn, better known by his stage name Jochen Miller, is a trance musician and progressive house DJ from Langenboom in the province of North Brabant in southern Netherlands.

Monster Massive was a Halloween-themed electronic music festival held annually on a weekend near Halloween at the Los Angeles Sports Arena in Los Angeles, California. Many of the attendees dressed in costume. The event was sponsored by Go Ventures.

Ralph Barendse is a DJ and producer of electronic dance music, mainly trance, performing as Ralphie B and Midway. Barendse's has also produced remixes for artists in the scene, among them Armin van Buuren, Tiësto, Solar Stone, Dario G, and 4 Strings. Barendse's original releases have also been remixed by other artists, including Paul van Dyk, Ronski Speed, Filterheadz, and D. Ramirez. 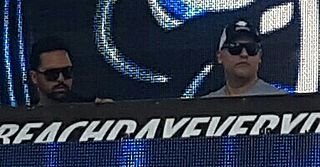 Aly & Fila are an Egyptian trance music duo made up of Aly El Sayed Amr Fathalah (Aly) and Fadi Wassef Naguib (Fila). They host an Internet radio show called Future Sound of Egypt, and are the founders of the label of the same name. The duo has played events across the world including Ultra Music Festival, Tomorrowland, Global Gathering, and Luminosity Beach Festival. Three of their tracks were chosen as "Tune of the Year" on Armin Van Buuren's show A State of Trance. "We Control The Sunlight," which featured the vocals of Jwaydan Moyine in 2012. "Unbreakable," with Roger Shah and vocals by Susana in 2016, and "Somebody Loves You," which featured vocals from Plumb, in 2020.

Heatbeat are an Argentinian trance and electro house production project formed in 2006 by Agustin Servente and Matias Chavez AKA Matias Faint. They have been providing a number of hits since their arrival. Their most famous tracks to date are 'Paradise Garage', 'Ask The Angels', 'Roses Never Cry', 'Rocker Monster', 'Chow Mein', 'Game Over', 'Aerys','Bloody Moon'and 'Cell'. Implementing various Spanish-styled note sections into their tracks, their style of Trance is unique and identifiable. Signing on to the Armada record label started by famous Trance Artist Armin van Buuren, their music reaches a widespread Trance audience.

Jason van Wyk is a composer, music producer and musician from South Africa. He is best known for his electronic and experimental compositions and has been releasing records since the early 2000s.

Mike Burns is an American video director, producer, and entrepreneur, currently residing in Los Angeles, California. He is a member of EDM production duo, "Interstate". His work on the 2004 release Creamfields by Paul Oakenfold earned him a Grammy nomination as a contributing producer and songwriter. Since 2010 Burns has worked exclusively with Lionsgate Entertainment as a Music supervisor and EPK producer. He recently directed over 200 productions for the Wanderlust Festival and now runs his own production agency "Burnsi Creative", which produces video content for feature film companies and major brands.

Masoud is an Iranian record producer, artist and DJ living in Bandar-e Anzali, Iran. He is known for leading the electronic dance music artist community in Iran.

Tempo Giusto is a Finnish trance music DJ, producer and composer currently residing in Turku, Finland. He is one of the leading names of Tech Trance and debuted in 2008 with the single "Agent Orange". Since then he has released music with many known electronic dance music labels such as Black Hole Recordings, Armada Music, Ultra Records and Spinnin Records. He also owns the Finland-based Echelon Records with his older brother Ima'gin. Their collaboration on "Gemini" resulted in #1 trance release on Beatport in June 2012. In 2019 Tempo Giusto's collaborative track "Mr. Navigator" with Armin van Buuren resulted in a #1 charting trance single on Beatport. In total Tempo Giusto holds 12 Beatport Top10 trance singles. In 2019 Tempo Giusto was nominated 'Electronic Music Artist' of the year at the Emma-gaala.

Christopher Anthony Jones is a British singer-songwriter renowned for featuring the vocals and lyrics on "Going Wrong" (2008), written and produced by Dutch trance DJ and producer Armin van Buuren plus German trance DJ and producer Roger Shah. This track was present in the Dutch charts for nine successive weeks and has been viewed more than 19,000,000 times on YouTube.

Danny de Graaf, who performs under the stage name David Gravell, is a Dutch trance DJ and music producer. He was voted for several IDMA's in 2015.