Bakchha is a 2007 film by Tshering Wangyel. It is the first horror film produced in Bhutan, where most movies are musicals that portray an imagined perfect society. [1] Most of the actors in the film are not professional actors but are hired locally; Rinzin Choden, one of the leading actresses, is one of the few professional actors in the film. [2]

Sherubtse College is the first accredited college in Bhutan, founded in 1966 by a group of Jesuits under the leadership of William Mackey.

Paro District is a district (dzongkhag), valley, river and town in Bhutan. It is one of the most historic valleys in Bhutan. Both trade goods and invading Tibetans came over the pass at the head of the valley, giving Paro the closest cultural connection with Tibet of any Bhutanese district. The dominant language in Paro is Dzongkha, the national language.

Chukha District is one of the 20 dzongkhag (districts) comprising Bhutan. The major town is Phuentsholing which is the gateway city along the sole road which connects India to western Bhutan. Chukha is the commercial and the financial capital of Bhutan. With Bhutan's oldest hydropower plant, Chukha hydel, and Tala Hydroelectricity Project, the country's largest power plant, Chukha is the dzongkhag which contributes the most to the GDP of the country. Also located in Chukha district are some of the country's oldest industrial companies like the Bhutan Carbide Chemical Limited (BCCL) and the Bhutan Boards Products Limited (BBPL). 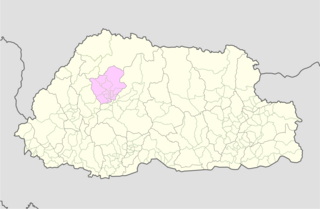 Travellers and Magicians is a 2003 Bhutanese Dzongkha-language film written and directed by Khyentse Norbu, writer and director of the arthouse film The Cup. The movie is the first feature film shot entirely in the Kingdom of Bhutan. The majority of the cast are not professional actors; Tshewang Dendup, a well-known Bhutanese radio actor and producer, is the exception. 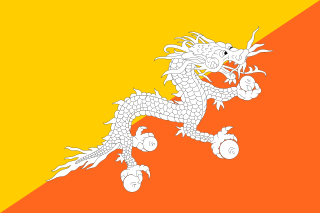 Bhutan, officially known as the Kingdom of Bhutan, is a landlocked country in the Eastern Himalayas. It is bordered by China to the north and India to the south. Nepal and Bangladesh are located in proximity to Bhutan but do not share a land border. The country has a population of over 754,000 and a territory of 38,394 square kilometers which ranks 133rd in terms of land area, and 160th in population. Bhutan is a constitutional monarchy with Vajrayana Buddhism as the state religion. 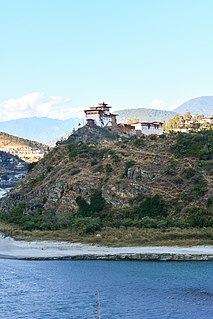 Sankosh is a river that rises in northern Bhutan and empties into the Brahmaputra in the state of Assam in India. In Bhutan, it is known as the Puna Tsang Chu below the confluences of several tributaries near the town of Wangdue Phodrang. The two largest tributaries are the Mo Chhu and Pho Chhu, which flow together at Punakha. The Punakha dzong, which is situated immediately above the confluence of the two rivers, is one of the most beautiful dzongs in Bhutan and the winter residence of the Dratshang Lhentshog. The upper reaches of the Pho Chhu are susceptible to ice blockages, and the dzong has been damaged on several occasions by glacial lake outburst floods. After it enters in India, it flows on the border of Assam and West Bengal. At Wangdue Phodrang, elevation 1,364 metres (4,475 ft), the river is joined by the west flowing Tang Chuu and it enters a precipitous gorge. The highway running south from Wangdue Phodrang to Dagana follows the river for much of its course. Near the town of Takshay is the confluence with the west flowing Hara Chhu. The last major Bhutanese tributary is the Daga Chhu.

The various mass media in Bhutan have historically been government-controlled, although this has changed in recent years. The country has its own newspapers, television and radio broadcasters and Internet Service Providers. 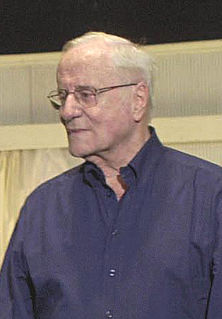 Paulo Paquet Autran was a Brazilian film and theater actor. His accomplishments during his life earned him the nickname, "Lord of the Stage."

The International Academy of Film and Television (IAFT) is a trade film school offering diploma and certificate programs in filmmaking, acting, and 3D animation. IAFT includes significant amounts of hands-on practical experience under the care and guidance of recognized industry mentors in its programs. IAFT Cebu was also voted as "one of the best film schools in the world" by the Hollywood Reporter.

Miss Bhutan is a national beauty pageant held annually in the Kingdom of Bhutan. Miss Bhutan is organized and produced by MPC Bhutan Entertainment, a film production company based in Thimphu, the capital city of Bhutan.

Sunil Thapa is a leading Nepalese actor who has appeared in Nepali, Bollywood and Bhojpuri films. He started his career with the Bollywood movie Ek Duuje Ke Liye.

Tsokye Tsomo Karchung is a Bhutanese actress and beauty pageant title holder who won Miss Bhutan 2008 and competed in Miss Earth 2008. She is also the first Bhutanese woman to be crowned as Miss Bhutan.
As an actress, she acted in many Bhutanese films including 'My Teacher, My World, Wai Lama Kencho and Meto Pema.

The cinema of Bhutan is a small but emerging industry, having started in the mid-1990s. It has since been supported by government officials and different businesses.

Kezang Wangmo is a Bhutanese politician, actress, poet, singer, dancer and goodwill ambassador for organic farming in Bhutan. Kezang was born in Paro District, western part of Bhutan, where she learned to act at her school.

Lhaki Dolma is a Bhutanese actress and politician who has been a member of the National Council of Bhutan, since May 2018.

Tandin Bidha is a Bhutanese film actress who appeared in a number of films. She has acted in about 31 movies until late. She first appeared in Tse Dhung Chen and last associated with the movie Ruebi.