Bhikhudan Govindbhai Gadhvi (born 1948) is an Indian folk singer and songwriter, known as a proponent of Dayro , a narrative singing tradition of Gujarat. [1] He is a recipient of the Gujarat Gaurav Award of the Government of Gujarat and the Sangeet Natak Akademi Award. [2] The Government of India awarded him the fourth highest civilian honour of the Padma Shri, in 2016, for his contributions to folk music. [3]

Bhikhudan Gadhvi was born on 19 September 1948 in manekvada, a village in junagadh district of the Indian state of Gujarat. [4] [5] He started singing at the age of ten and after completing his secondary school education, he made his debut as a singer at the age of 20. [6] Reading the works of Jhaverchand Meghani and Dula Bhaya Kag early in his life is reported to have inspired Gadhvi to take up song writing and he focused on Dayro tradition, a folk music tradition of Gujarat where the performer sings narrative stories. He has since performed in many countries such as the US, UK and Indonesia and has over 350 audio albums to credit which include popular tracks like Bhadanu Makan and Khandaninu Khamir. [6] He is from Scheduled Tribe community which is known as gadhvi in saurashtra.[ citation needed ]

Gadhvi received the Gujarat Gaurav Award of the Government of Gujarat [1] before the Sangeet Natak Akademi awarded him the Akademi Puraskar in 2009. [2] The Government of India included him the Republic Day honors list for the civilian honor of the Padma Shri in 2016. [3] He is also a recipient of the Shri Dula Bhaya Kag Award. [6] He is married to Gajraba and have a son Bharatbhai. [7] The family lives in Junagadh in Gujarat. [1]

Gujarat, a western state of India, is known for music traditions of both folk and classical music.

Surendranagar is an administrative district in Saurashtra region of Gujarat state in India. It has a population of approximately 1.7 million people. Surendranagar city, along with the twin city of Wadhwan, has a total of 400,000 inhabitants, and is known as "Camp". 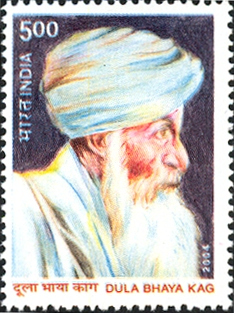 Dula Bhaya Kag or Kag Bapu was an Indian poet, songwriter, writer, and artist born in 1903 in Sodvadari village, a village in the Saurashtra region, near Mahuva in the Indian state of Gujarat. He is mainly known for his work on spiritual poetry relating to Hinduism. He was facilitated with Padma Shri award in the year 1962.

Kumarpal Balabhai Desai is an author, critic, editor, journalist, columnist and translator from Gujarat, India. He studied and later taught at the Gujarat University. He is associated with several social and Gujarati literary organisations such as Gujarati Sahitya Parishad. He has written and edited more than hundred books including biographies and several works on Jainism. He is awarded the Padma Shri in 2004. 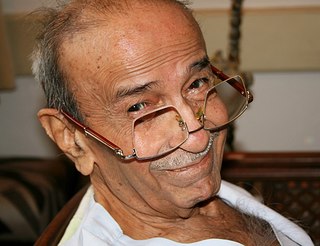 Tarak Janubhai Mehta was an Indian columnist, humourist, writer and playwright who is best known for the column Duniya Ne Undha Chasma. He translated and adapted several comedies into Gujarati, and was a well-known figure in Gujarati theatre.

Jhaverchand or Zaverchand Kalidas Meghani was an Indian poet, writer, social reformer and freedom fighter. He is a well-known name in the field of Gujarati literature. He was born in Chotila where the Government College has been renamed for this literary as Raashtreeya Shaayar Zaverchand Meghani College, Chotila. Mahatma Gandhi spontaneously gave him the title of Raashtreeya Shaayar. Besides this he received many awards like Ranjitram Suvarna Chandrak and Mahida Paaritoshik in literature. He authored more than 100 books. His first book was a translation work of Rabindranath Tagore's called Kathaa-u-Kaahinee titled Kurbani Ni Katha which was first published in 1922. He contributed widely to Gujarati folk literature. He went from village to village in search of folk-lores and published them in various volumes of Saurashtra Ni Rasdhar. He was also the Editor of Phulchhab Newspaper of Janmabhoomi group. 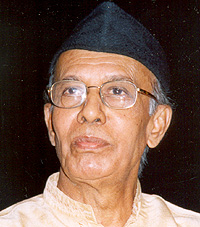 Tulsidas Borkar was an Indian composer and harmonium player. The Government of India awarded him the civilian honour of the Padma Shri in 2016.

Valayapatti A. R. Subramaniam is an Indian classical musician and percussionist, considered by many as one of the foremost prominent exponents of Thavil also known as Dolu, a traditional percussion instrument in Carnatk music, accompanying windpipe instruments such as nadaswaram, saxophone, clarinet, etc, and string instruments like violin, mandolin, etc. He was awarded the Madras Music Academy's Sangeetha Kalanidhi in 2009. He is a recipient of the Sangeet Natak Akademi Award. The Government of India awarded him the fourth highest civilian honour of the Padma Shri, in 2007, for his contributions to Music.

Diwaliben Punjabhai Bhil, also known as Diwaliben Punjabhai Ladhia, was a Gujarati folk singer and playback singer from Gujarat, India. Her talent was discovered late; she then sang on radio and in Gujarati films. She was awarded the Padma Shri in 1990. She was also recognized as a "Gujarat ni Koyal" by public.

Dadudan Pratapdan Gadhvi, also known as Kavi Dad, was a Gujarati poet and folk singer from Gujarat, India. He was awarded the Padma Shri in 2021.