Robert Harvey Coronado (born May 22, 1936) is a former American football player who played for Pittsburgh Steelers of the National Football League (NFL). He played college football at the University of the Pacific. [2] 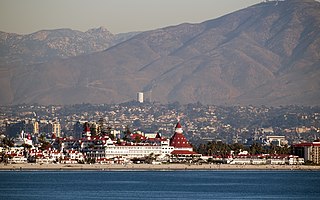 Coronado High School is the second newest high school in the Lubbock Independent School District. Coronado, named for the Spanish conquistador and explorer Francisco Vásquez de Coronado, opened its doors in 1965 as the fourth high school in Lubbock, joining the list of Lubbock High, Monterey High and Dunbar High. Estacado was built two years after Coronado opened, in 1967. The mascot of the school is the Mustang and the school colors are Scarlet and Old Gold. Like the other high schools in Lubbock ISD, Coronado discontinued its block scheduling in the 2012–13 academic calendar. and went to an every class everyday schedule. The school serves the southwestern part of Lubbock, Texas. The Coronado male sports teams are known as the "Mustangs" with the female teams referred to as the "Lady Mustangs".

The Fender Coronado is a double-cutaway thin-line hollow-body electric guitar, announced in 1965. It is manufactured by Fender Musical Instruments Corporation. The aesthetic design embodied in the Coronado represents a departure from previous Fender instruments; the design remains an uncharacteristic piece of Fender history.

Coronado High School in El Paso, Texas, United States is located on the west side of El Paso near the intersection of North Mesa Street and Resler Drive. It serves the southern part of west El Paso: east of Interstate 10, from the vicinity of Executive Center Boulevard north approximately three miles to around Coronado Arroyo, a normally dry stream bed running west down from the Franklin Mountains just north of Escondido Drive; and the portion of the Upper Valley which lies south of Country Club Road. Most of the Coronado attendance zone is zoned to Morehead Middle School for grades six to eight. The elementary schools in the Coronado feeder pattern include Dr. Green, L.B Johnson, Putnam, Carlos Rivera, Western Hills, and Zach White. The Upper Valley portion of the Coronado attendance area is zoned to Zach White Elementary and Lincoln Middle School, except for the Buena Vista neighborhood around Interstate 10 and West Paisano Drive, which is zoned to Johnson and Morehead. Dr. Green, L.B Johnson, Putnam, Carlos Rivera and Western Hills elementary schools all graduate into Morehead Middle School.

Sergio Lorenzo "Serge" Pizzorno is a British guitarist, vocalist, music producer and songwriter, best known for his work with the rock band Kasabian. He is Kasabian's primary songwriter since the departure of Christopher Karloff. He is also a member of Loose Tapestries alongside Noel Fielding and Kasabian touring member Tim Carter, a group put together to produce music for Fielding's TV series Noel Fielding's Luxury Comedy.

Martín Cardetti is a retired Argentine football striker and manager.

Fulton Kuykendall is a former NFL football player. He is a graduate from the University of California, Los Angeles who played pro football from 1975–1985 for the Atlanta Falcons. The lanky 6-4 225 lb Kuykendall started primarily at inside linebacker for the Falcons from 1975–1983, making the Pro Football Weekly All-NFC Team in 1978. Nicknamed "Kaptain Krazy" by his teammates, he was known for his apparent disregard for his body, launching himself into opposing blockers and ball carriers with fervor. A Member of the 1977 Atlanta Falcons "Gritz Blitz" defense. Noted for fewest points in a season 129. Also known as one of the top 10 NFL Defenses of All-Time.

Coronado High School (CHS) is a National Blue Ribbon high school in Coronado, California. The school was founded in 1913.

Tysson Poots is an American football wide receiver who is currently a free agent. He was signed by the Dallas Cowboys as an undrafted free agent.

José Miguel Villalobos Chan is a Costa Rican professional footballer who plays as a defender for Uruguay de Coronado.

Abraham Coronado Tafoya is a Mexican footballer who plays as a winger for Venados FC.

Jarrett Culver is an American professional basketball player for the Minnesota Timberwolves of the National Basketball Association (NBA). He played college basketball for the Texas Tech Red Raiders.

Robert Coronado is an American soccer player who plays for Rio Grande Valley FC in the USL Championship.