Boksburg F.C. is a South African soccer club. [1] They competed in the National Football League. [2] 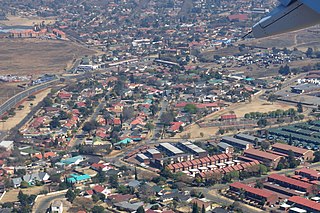 Boksburg is a city on the East Rand of Gauteng province of South Africa. Gold was discovered in Boksburg in 1887. Boksburg was named after the State Secretary of the South African Republic, W. Eduard Bok. The Main Reef Road linked Boksburg to all the other major mining towns on the Witwatersrand and the Angelo Hotel (1887) was used as a staging post.

The following lists events that happened during 1977 in South Africa. 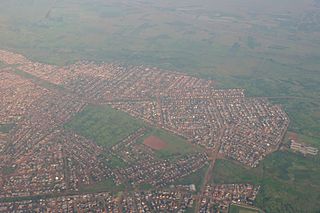 Vosloorus is a large township situated in the South of Boksburg and just east of Katlehong in Ekurhuleni, Gauteng, South Africa. It was established in 1963 when Black Africans were removed from Stirtonville because it was considered by the government too close to a white town. Stirtonville, renamed Reiger Park, has since become home to Boksburg's coloured community. A local authority was established in 1983 when Vosloorus was given full municipal status.

MacDonald "Scooter" Mukasi is a former South African football player who played as a forward.

Berry Nieuwenhuys, was a South African footballer who played predominantly for Liverpool, which he was contracted to from 1933 to 1947. He retired in 1947, returning to South Africa to be employed at the Transvaal Country Club.

Thapelo Sylvester Tshilo is a South African international footballer who plays professionally as a defender for Polokwane City.

The former Japan Football League was an association football league that existed from 1992 to 1998. Also known as the JFL, it was the 2nd tier of the Japanese football hierarchy following J.League.

Mouille Point ("Mu-lee") is an affluent suburb of Cape Town, situated between the Victoria and Alfred Waterfront and Granger Bay to the east, Green Point to the south and the Atlantic Ocean to the north and west. The suburb hugs the coastline and is dominated by high-end apartment blocks.

Bradley Allan Grobler is a South African footballer who plays as a striker for Premier Soccer League club SuperSport United and the South African national team.

Christian Brothers' College, Boksburg is a Roman Catholic private school located in the town of Boksburg in Gauteng, South Africa. The school accommodates children from grade 0 to grade 12. The school is made up of the primary, prep and high school. A weekly boarding facility was opened on 14 January 2013 and caters for boys from Grade 7 to Grade 12. The facility can accommodate up to 54 boys.

Boksburg High School is a public high school in Boksburg, a suburb of Ekurhuleni, South Africa. The school was founded in 1920 as the Rand East Training and Preparatory College under its first Principal, Mr Charter. In 1925, the school changed its name to Boksburg High School. Over the years, substantial additions to the campus grounds were made such the absorption of Leeuwpoort Primary School. The school has had seven Principals over its nearly 100 years history and its enrollment rate expanded from the first class of the REPTC which consisted of 13 students, to approximately 1600 students as of 2019, acceptance to which being highly sought after with the school often receiving more applications for admission than places available. The school is among the top performing schools in its district.