Oradea is a city in Romania, located in Crișana, a sub-region of Transylvania. The seat of Bihor County, Oradea is one of the most important economic, social and cultural centers in the western part of Romania. The city is located in the north-west of the country, nestled between hills on the Crișana plain, on the banks of the river Crișul Repede, that divides the city into almost equal halves.

CS Universitatea Cluj-Napoca is a Romanian professional basketball club based in Cluj-Napoca, Romania. The club, for sponsorship reason under the name U-Banca Transilvania Cluj-Napoca, competes in the Liga Națională. As other sports teams that were initially part of the parent sports club, U Cluj, for historical reasons, the club keeps the name U in its name.

Asociația Fotbal Club Astra Giurgiu, commonly known as Astra Giurgiu or simply Astra, was a Romanian football club based in the city of Giurgiu, Giurgiu County. Founded in 1921 in Ploiești as Clubul Sportiv Astra-Română, it spent the majority of its history in the lower leagues. On 19 October 2022, the club was officially shut down.

Adrian Ioan Hora is a Romanian professional footballer who plays for FC Hermannstadt. Deployed mainly as a winger during the first part of his career, he later found more success in the centre as a main striker.

CSM Oradea, also known as simply Oradea, is a Romania professional basketball club, based in Oradea, Romania. The club competes in the Liga Națională, the highest level of basketball in Romania.

Clubul Sportiv Dinamo București is a Romanian handball club based in Bucharest, that competes in the Liga Națională, the top flight of Romanian handball. Nicknamed "the Red Dogs", the club was founded in 1948. The club's home ground is the Sala Polivalentă Dinamo in Sector 2, to which it moved in 2013. Dinamo București are among Romania's most successful clubs, having won over twenty competitive honours, including 18 top-flight titles, 7 Romanian Cups, 5 Romanian Supercups, and 1 EHF Champions League. Dinamo București has rivalry with Steaua București.

Fotbal Club Viitorul Constanța, commonly known as Viitorul Constanța or simply Viitorul, was a Romanian professional football club based in Ovidiu, Constanța County. They last played their home matches in blue and black kits at the Stadionul Viitorul, situated a few kilometres north of the city of Constanța. 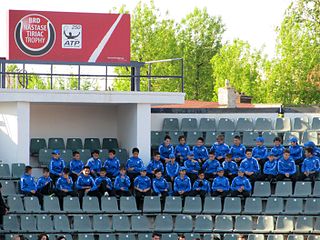 Claudiu Belu-Iordache is a Romanian professional footballer who plays as a right-back for Liga I club Rapid București. 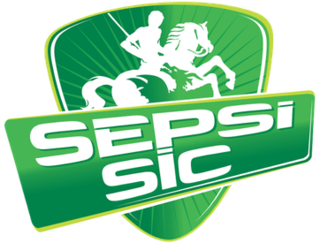 ACS Sepsi SIC Sfântu Gheorghe or commonly Sepsi SIC is a women's basketball professional club based in Sfântu Gheorghe, Romania. The former club was Sepsi BC, but it was dissolved in 2012 and replaced by Sepsi SIC. The club competes in the Romanian First League and for the first time in the EuroCup Women in the 2013-14 season.

Ferencvárosi Torna Club is a water polo club from Budapest, Hungary. The team competes in the Országos Bajnokság I.

Ianis Hagi is a Romanian professional footballer who plays as an attacking midfielder or a forward for Scottish Premiership club Rangers and the Romania national team.

Sergiu Cătălin Hanca is a Romanian professional footballer who plays as a right winger for Liga I club Universitatea Craiova.

Valentin Gheorghe is a Romanian professional footballer who plays as a winger for Süper Lig club Ümraniyespor, on loan from Liga I club FCSB.