Carlos Ariel Luna (born January 17, 1982 in Piquillín, Córdoba) is an Argentine footballer who plays as a forward for Tigre.

Luna started his career in 2000 in the 3rd tier of Argentine football with Deportivo Español. In 2001-2002 he was part of the squad that won promotion to the Primera B Nacional where he played for one season before dropping back down a division to play for All Boys in 2003-2004 and Club Atlético Tigre in 2004-2005.

Luna was signed by Racing Club de Avellaneda of the Primera Division Argentina for the 2005-2006 season but was offloaded to Quilmes in 2006.

During his time at Quilmes the club endured one of their worst seasons finishing bottom of the table with only 21 points. Despite the weakness of the team Luna managed to score seven goals in the Clausura 2007 tournament, bringing him to the attention of Elche and prompting his move to Spain during the June–July 2007 transfer window. During the Clausura 2009 Luna scored 11 goals, nearly half of Tigre's 24 and helped them to qualify for the Copa Sudamericana 2009. LDU Quito signed the Argentine forward "El Chino" for $3m from Argentine side Club Atlético Tigre. [1]

Club Deportivo Godoy Cruz Antonio Tomba, known simply as Godoy Cruz, is an Argentine sports club from Godoy Cruz, Mendoza. The club is best known for its football team, that plays in the Primera División, the top level of the Argentine football league system.

Claudio Fernando Graf is a retired Argentine football striker. He is now a coach.

Claudio Daniel Bieler is an Argentine footballer who plays as a forward for Independiente del Valle. 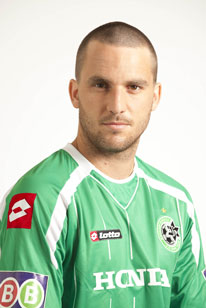 Liga Deportiva Universitaria de Quito's 2008 season is the club's 55th year in professional football, and the 47th in the top level of national football, Ecuador's Serie A.

Liga Deportiva Universitaria de Quito's 2009 season was the club's 56th year in professional football, and the 48th in the top level of professional football in Ecuador. The club participated in their 14th Copa Libertadores, where they unsuccessfully defended their 2008 title. The club also participate in, and won, their first Recopa Sudamericana. They also won their first Copa Sudamericana title.

The 2010 Recopa Sudamericana de Clubes was a two-legged tie that determined the winner of the Recopa Sudamericana, an annual football match between the winners of the previous season's Copa Libertadores and Copa Sudamericana competitions. It was contested between Argentine club Estudiantes La Plata and LDU Quito from Ecuador. The first leg was played on August 25 in Quito, while the second leg was played in Quilmes. Estudiantes participated in the Recopa for their first time ever, having qualified by winning the 2009 Copa Libertadores. LDU Quito was the defending champion and making their second consecutive appearance having won the 2009 Copa Sudamericana.

Liga Deportiva Universitaria de Quito's 2010 season was the club's 80th year of existence, the 57th year in professional football, and the 49th in the top level of professional football in Ecuador. Former manager Edgardo Bauza returns to the position after Jorge Fossati left to sign with Internacional. While Liga unsuccessfully defended its 2009 title in the Copa Sudamericana and lost the Suruga Bank Championship, they became the third team to win back-to-back Recopa Sudamericanas and won their tenth Serie A title.

The finals stages of the 2010 Copa Sudamericana de Clubes are the Round of 16, Quarterfinals, Semifinals, and Finals. Teams from the Round of 16 onwards were seeded depending on which Second Stage tie they win.

Liga Deportiva Universitaria de Quito's 2011 season was the club's 81st year of existence, the 58th year in professional football, and the 50th in the top level of professional football in Ecuador. Liga came in as the defending Serie A champion and having qualified to the 2011 Copa Libertadores and the 2011 Copa Sudamericana, but failed to win a title for the first time since 2006.

The 2011 season is the 89th season of competitive football in Ecuador.

In the 2011–12 football season, the top league, Uruguayan Primera División, was won by Nacional. Progreso won the Segunda División and won promotion along with Central Español and Juventud. Three Uruguayan teams qualified for each of the 2011 Copa Sudamericana and 2012 Copa Libertadores. The national team played the first five of its qualifying matches for the 2014 FIFA World Cup, and took part in the 2011 Pan American Games, where the team lost to Argentina in the semifinal. National youth teams were also in action.

The 2012 Campeonato Ecuatoriano de Fútbol de la Serie A was the 54th season of the Serie A, Ecuador's premier football league. The season began on February 3 and ended in December 2012. Deportivo Quito was the defending champion. They were succeeded by Barcelona, who won their record-breaking 14th title.

Lucas Nicolás Chacana is an Argentine professional footballer who plays as a forward for Primera B Nacional side Deportivo Morón.

Carlos Emiliano Rodríguez Rodríguez is a Uruguayan professional footballer who plays as a defender for L.D.U. Quito.