In 2019, Crowther was elected a Fellow of the Royal Society of New Zealand. [6]

Preterm birth, also known as premature birth, is the birth of a baby at fewer than 37 weeks' gestational age, as opposed to the usual about 40 weeks. These babies are known as preemies or premmies. Symptoms of preterm labor include uterine contractions which occur more often than every ten minutes or the leaking of fluid from the vagina. Premature infants are at greater risk for cerebral palsy, delays in development, hearing problems and sight problems. The earlier a baby is born, the greater these risks will be.

Kangaroo care or kangaroo mother care (KMC), sometimes called skin-to-skin contact, is a technique of newborn care where babies are kept chest-to-chest and skin-to-skin with a parent, typically their mother. It is most commonly used for low birth-weight preterm babies, who are more likely to suffer from hypothermia, while admitted to a neonatal unit to keep the baby warm and support early breastfeeding.

Labor induction is the process or treatment that stimulates childbirth and delivery. Inducing labor can be accomplished with pharmaceutical or non-pharmaceutical methods. In Western countries, it is estimated that one-quarter of pregnant women have their labor medically induced with drug treatment. Inductions are most often performed either with prostaglandin drug treatment alone, or with a combination of prostaglandin and intravenous oxytocin treatment.

Tocolytics are medications used to suppress premature labor. Tocolytic therapy is provided when delivery would result in premature birth, postponing delivery long enough for the administration of glucocorticoids, which accelerate fetal lung maturity but may take one to two days before its effects are seen.

Prelabor rupture of membranes (PROM), previously known as premature rupture of membranes, is breakage of the amniotic sac before the onset of labor. Women usually experience a painless gush or a steady leakage of fluid from the vagina. Complications in the baby may include premature birth, cord compression, and infection. Complications in the mother may include placental abruption and postpartum endometritis.

Antenatal steroids are medications given to pregnant women expecting preterm delivery. They have been shown to reduce the morbidity and mortality of hyaline membrane disease. They have also been shown to have definite beneficial effect even in conditions of preterm premature rupture of membranes (PPROM).

Bronchopulmonary dysplasia is a chronic lung disease in which premature infants, usually those who were treated with supplemental oxygen, require long-term oxygen. It is more common in infants with low birth weight (LBW) and those who receive prolonged mechanical ventilation to treat respiratory distress syndrome (RDS). It results in significant morbidity and mortality. The definition of BPD has continued to evolve primarily due to changes in the population, such as more survivors at earlier gestational ages, and improved neonatal management including surfactant, antenatal glucocorticoid therapy, and less aggressive mechanical ventilation.

Magnesium salts are available as a medication in a number of formulations. They are used to treat magnesium deficiency, low blood magnesium, eclampsia, and several other conditions. Magnesium is important to health. 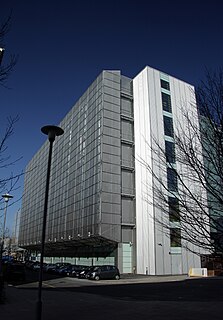 Neena Modi is a Professor of Neonatal medicine at Imperial College London, and has been the president of the Royal College of Paediatrics and Child Health since April 2015.

Magnesium sulfate as a medication is used to treat and prevent low blood magnesium and seizures in women with eclampsia. It is also used in the treatment of torsades de pointes, severe asthma exacerbations, constipation, and barium poisoning. It is given by injection into a vein or muscle as well as by mouth. As epsom salts, it is also used for mineral baths.

Kathryn Margaret McPherson is a New Zealand medical researcher and administrator. As of 2018 she is a full professor at the Auckland University of Technology and chief executive of the Health Research Council of New Zealand.

Lesley Margaret Elizabeth McCowan is a New Zealand medical researcher and academic specialising in maternal health. She is currently a full professor and head of obstetrics and gynaecology at the University of Auckland.

Sally Nicola Merry is a New Zealand child psychiatry academic. She is currently a full professor at the University of Auckland and holds the Cure Kids Duke Family Chair in Child and Adolescent Mental Health.

Matire Louise Ngarongoa Harwood is a New Zealand general practitioner and clinical researcher of Ngāpuhi descent. She is an associate professor at the University of Auckland. Harwood was the 2017 New Zealand L'Oréal UNESCO For Women in Science Fellow. Her expertise is in Māori health, focussed on reducing health inequity by improving indigenous health and well-being.

Laura Bennet is a New Zealand academic, and as of 2019 is a full professor at the University of Auckland.

Lex William Doyle is an Australian paediatrician, researcher and academic, best known for his widely published neonatal research into positive long-term outcomes for premature babies. He is currently the head of clinical research development at the Royal Women's Hospital in Melbourne, having been a consultant neonatal paediatrician at the hospital from 1983 until 2006.

Ngaire 'Sue' Susan Stott is a New Zealand paediatric orthopaedic surgeon, and as of 2019 is a full professor at the University of Auckland and holds a position at Starship Hospital.

Charles Richard William Beasley is a New Zealand academic and as of 2019 is a full professor at the Victoria University of Wellington.