Cash and carry was a policy by US President Franklin Delano Roosevelt announced at a joint session of the United States Congress on September 21, 1939, subsequent to the outbreak of war in Europe. It replaced the Neutrality Acts of 1937, by which belligerents could purchase only nonmilitary goods from the United States as long as the recipients paid immediately in cash and assumed all risk in transportation using their own ships. [1] The "Cash and Carry" revision allowed the sale of military arms to belligerents on the same cash-and-carry basis. [2]

Originally presented to Congress by Senator Key Pittman (D-NV) earlier in 1939, the bill was designed to replace the Neutrality Act of 1937, which had lapsed in May 1939. [3] The bill had been defeated repeatedly by the Senate and the House on more than one occasion as Isolationists feared that passing the bill would draw the US into the conflict in Europe. However, President Roosevelt felt that further help was needed in Europe after Germany invaded Poland in September 1939. The bill passed in late October, gaining approval from the House on November 5, 1939. [4] The President gave his signature the same day.

The purpose of this policy was to allow the Allied nations at war with Germany to purchase war materials while maintaining a semblance of neutrality for the United States. Various policies, such as the Neutrality Acts of 1935, 1936, and 1937, forbade selling implements of war or lending money to belligerent countries under any terms. Cash and carry ended this prohibition, while still attempting to keep U.S. interests out of the conflict. U.S. ships were forbidden from entering into conflict zones, and US passengers traveling on foreign ships were notified that they did so at their own risk.

Coming out of the Great Depression, the U.S. economy was rebounding. Further growth in manufacturing would propel the economy forward. The cash and carry program stimulated U.S. manufacturing while allowing the Allied nations, particularly the United Kingdom, to purchase much needed military equipment.

The program prevented U.S. business interests from backing the success or failure of any warring nation. Because of the conclusion of the Nye Committee, which asserted that United States involvement in World War I was driven by private interests from arms manufacturers, many Americans believed that investment in a belligerent would eventually lead to American participation in war.[ citation needed ]

The "cash and carry" legislation enacted in 1939 effectively ended the arms embargo that had been in place since the Neutrality Act of 1936, and paved the way for Roosevelt's Lend-Lease program. 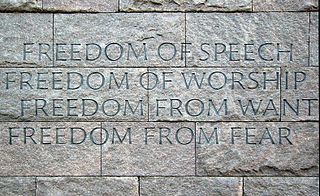 The Four Freedoms were goals articulated by United States President Franklin D. Roosevelt on Monday, January 6, 1941. In an address known as the Four Freedoms speech, he proposed four fundamental freedoms that people "everywhere in the world" ought to enjoy:

The Neutrality Acts were a series of acts passed by the United States Congress in the 1930s in response to the growing threats and wars that led to World War II. They were spurred by the growth in isolationism and non-interventionism in the US following its disillusionment after World War I, and sought to ensure that the US would not become entangled again in foreign conflicts. 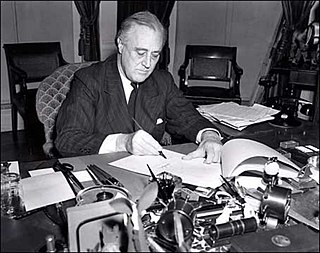 The Lend-Lease policy, formally titled An Act to Promote the Defense of the United States, was a program under which the United States supplied the United Kingdom, Free France, the Republic of China, and later the Soviet Union and other Allied nations with food, oil, and materiel between 1941 and August 1945. This included warships and warplanes, along with other weaponry. It was signed into law on March 11, 1941, and ended in September 1945. In general the aid was free, although some hardware were returned after the war. In return, the U.S. was given leases on army and naval bases in Allied territory during the war. Canada operated a similar smaller program called Mutual Aid.

The America First Committee (AFC) was the foremost United States non-interventionist pressure group against the American entry into World War II. Started on September 4, 1940, it put out mixed messaging with antisemitic and pro-fascist rhetoric from leading members, and it was dissolved on December 10, 1941, three days after the attack on Pearl Harbor had brought the war to the United States. Membership peaked at 800,000 paying members in 450 chapters. It was one of the largest anti-war organizations in the history of the United States.

A neutral country is a state which is neutral towards belligerents in a specific war, or holds itself as permanently neutral in all future conflicts. As a type of non-combatant status, neutral nationals enjoy protection under the law of war from belligerent actions, to a greater extent than other non-combatants such as enemy civilians and prisoners of war.

On September 3, 1939, the British and French declarations of war on Germany initiated the Battle of the Atlantic. The United States Navy Chief of Naval Operations (CNO) established a combined air and ship patrol of the United States Atlantic coast, including the Caribbean, on September 4. President Franklin D. Roosevelt declared the United States' neutrality on September 5, and declared the naval patrol a Neutrality Patrol. Roosevelt's initiation of the Neutrality Patrol, which in fact also escorted British ships, as well as orders to U.S. Navy destroyers first to actively report U-boats, then "shoot on sight", meant American neutrality was honored more in the breach than observance.

A non-belligerent is a person, a state, or other organization that does not fight in a given conflict. The term is often used to describe a country that does not take part militarily in a war. The status does not exist in international law.

United States v. Curtiss-Wright Export Corp., 299 U.S. 304 (1936), was a decision of the U.S. Supreme Court concerning the foreign affairs powers of the President of the United States.

Non-interventionism is the diplomatic policy whereby a nation seeks to avoid alliances with other nations in order to avoid being drawn into wars not related to direct territorial self-defense, has had a long history among government and popular opinion in the United States. At times, the degree and nature of this policy was better known as isolationism, such as the period between the world wars.

"The Darkest Hour" was a phrase coined by British Prime Minister Winston Churchill to describe the period of World War II between the Fall of France in June 1940 and the Axis invasion of the Soviet Union in June 1941, when the British Empire and Commonwealth stood alone against the Axis Powers in Europe. 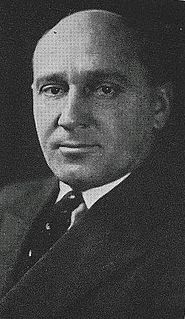 Joseph Lawrence Pfeifer was a United States Representative from New York. Born in Brooklyn, he attended St. Nicholas Parochial School, St. Leonard's Academy, and St. Francis College in Brooklyn. He graduated from Long Island Medical College in 1914 and was licensed to practice the same year. He was a lecturer and author on surgical topics and during the First World War he served on the medical advisory board, instructing medical officers going overseas.

Vincent Francis Harrington was a Democratic U.S. Representative from Iowa. Harrington was commissioned in the United States Army Air Forces after the Pearl Harbor attack, resigned from Congress when President Franklin D. Roosevelt disallowed members of Congress from serving in the military at the same time, and died of natural causes while on active duty in England. A Liberty Ship was named in his honor.

The presidency of Franklin D. Roosevelt began on March 4, 1933. 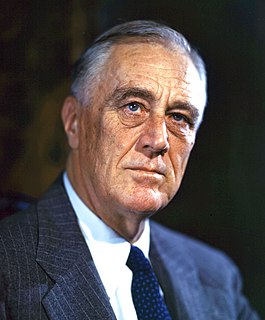 The first and second terms of the presidency of Franklin D. Roosevelt began on March 4, 1933, when he was inaugurated as the 32nd President of the United States, and ended with Roosevelt's third inauguration on January 20, 1941. Roosevelt, a Democrat from New York, took office after defeating incumbent Republican President Herbert Hoover, who had presided over the start of the Great Depression. Upon his accession to office, Roosevelt led the implementation of the New Deal, a series of programs designed to provide relief, recovery, and reform to Americans and the American economy.