Centro-matic was an American band based in Denton, Texas.

Centro-matic started in 1995 as a side-project for Will Johnson. It released a few singles that year and grew into a full-fledged group in 1997. [1] The initial 60 songs recorded in a Millstadt, Illinois studio supplied the material for the quieter, more emotional Navigational on Idol Records and the louder, lo-fi The Static vs. the Strings, Vol. 1 on Quality Park Records.

Throughout his career, Johnson has had a reputation for being prolific and dynamic. So much so, that he built an entirely separate band, the much quieter side-project, South San Gabriel, named after the San Gabriel river fork north of Austin, Texas. The group consists of the same players from Centro-matic with the inclusion of guests, but focuses on more introspective and subdued offerings from Johnson's repertoire. Will has alternated between the two projects, while also releasing solo albums. Centro-matic released Distance and Clime on Idol in 2001 and "Love You Just the Same" on Misra in 2003. South San Gabriel released Welcome, Convalescense and The Carlton Chronicles in 2003 and 2005, respectively. Johnson's solo albums, Murder of Tides and Vultures Await, appeared in 2002 and 2004. Centro-matic followed up Love You Just the Same with Fort Recovery in March 2006. The two-disc set Dual Hawks was released in 2008, with one disc featuring the songs of Centro-matic and the other featuring South San Gabriel. [2]

Johnson was recently introduced as an "official member" of the band Monsters of Folk, [3] also consisting of Conor Oberst, Jim James, and M. Ward, on an episode of Austin City Limits the group performed on. On the taping, and on tour, Johnson serves as the band's drummer, provides backup vocals, as well as performing some material of his own.

Johnson was also a member of the group The Undertow Orchestra, featuring David Bazan, Mark Eitzel and the late Vic Chesnutt. https://web.archive.org/web/20140925033455/http://www.centro-matic.com/2014/december-tour-dates/ Johnson and Scott Danbom have performed as part of Drive-By Truckers frontman Patterson Hood's band, during his solo tours. [4]

In September, 2014 the band announced that it would cease performing following their December, 2014 tour. [5] They played their final show at Dan's Silverleaf in Denton, Texas on December 21, 2014.

Flickerstick was an American indie rock band from Denton, Texas.

Mates of State are an American indie pop duo, active since 1997. The group consists of the husband-and-wife team of Kori Gardner and Jason Hammel. 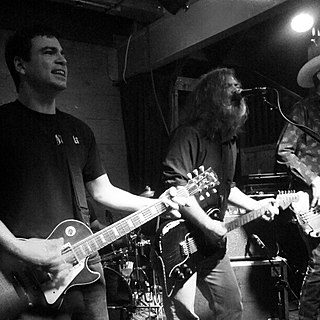 Slobberbone is an American alt-country band from Denton, Texas, led by singer-songwriter Brent Best, Jess Barr, Tony Harper, and Brian Lane. Best continues to tour as a solo act, performing both songs by Slobberbone and The Drams, and songs from his solo record, but also reunites with both bands for shows with full band line-ups.

Baboon is an American rock band originally from Denton, Texas.

Sean Nelson is an American musician, journalist, music critic, and filmmaker. He is best known as the lead singer of the alternative rock group Harvey Danger and as the arts editor for The Stranger newspaper in Seattle, Washington. 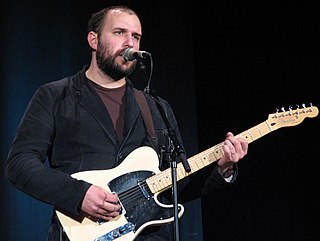 Summer Hymns is a band based in Athens, Georgia.

South San Gabriel is an alternative country band based in Denton, Texas.

Undertow began in 1996 in St Louis as a collective of independent artists, musicians, filmmakers, designers and creative managers sharing resources, ideas, and a love of music. Undertow Music is currently located in Champaign, IL.

Will Johnson is an American musician, singer-songwriter and painter who is the lead singer of the bands Centro-matic and South San Gabriel. Called "one of the most prolific artists in American indie rock", Johnson has also released solo records, and is a member of the bands Monsters of Folk, New Multitudes and Overseas, and has also performed as part of the Undertow Orchestra.

Chomsky is an American band.

Red Animal War is a rock band from Dallas, Texas that started in 1998 as Jeff Wilganoski, Jamie Shipman, Matt Pittman, and Justin Wilson. During the recording of their first album, Brian Pho replaced Jamie Shipman. Jeff Davis replaced Brian Pho in 2004, and Tony Wann came on as second drums later that year. Todd Harwell replaced Jeff Wilganoski in 2006, and after a SXSW performance the band went on indefinite hiatus.

Love You Just The Same is a 2003 rock album by Texan rock band Centro-Matic. 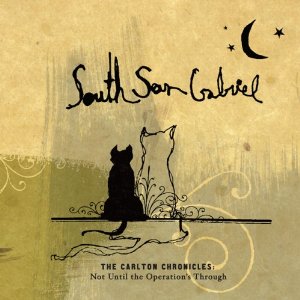 The Carlton Chronicles: Not Until the Operation's Through is an album released by South San Gabriel in 2005.

Dual Hawks is an album by Centro-Matic and South San Gabriel. It consists of 23 tracks. Will Johnson is the principal songwriter for both bands.

Sarah Allison Jaffe is an American singer-songwriter from Denton, Texas. Known for her distinctively clear vocals, she has worked as a singer-songwriter across many musical genres, including acoustic-folk, indie pop and hip hop.

Christy Brigitte Darlington, commonly known by his stage name of Darlington, is an American singer-songwriter, guitarist, published author and visual artist. He has performed multiple American and European concert tours, and has had music played on hundreds of radio stations across North America and Europe, as well as featured in television shows on MTV. 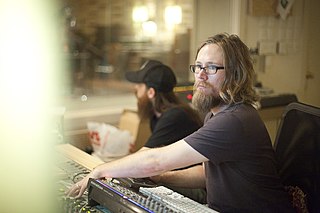