Last updated November 20, 2020
This article is about the school in Scotland. For the school in Nottinghamshire, England, see Clifton Hall Girls' Grammar School.
Independent day school in Newbridge, Edinburgh, Scotland

Clifton Hall School is an independent day school located near Newbridge in Edinburgh, Scotland. It is divided into the Nursery, Junior, and Senior Schools and educates pupils from nursery to Senior 6.

The school occupies a 19th-century, category A-listed building. This was constructed in 1850 to designs by David Bryce for the Maitland family, who had inherited the property in 1786. An older house, possibly from the late 16th century, forms the basis of the structure, although it was completely rebuilt in the Scottish baronial style. [1]

The Edinburgh Academy is an independent school in Edinburgh, Scotland, which was opened in 1824. The original building, on Henderson Row in the city's New Town, is now part of the Senior School. The Junior School is located on Arboretum Road to the north of the city's Royal Botanic Garden.

Lamlash is a town on the Isle of Arran, in the Firth of Clyde, Scotland. It lies 3 miles (5 km) to the south of ferry port Brodick, in a sheltered bay on the island's east coast, facing the Holy Island. Lamlash is the seat of Arran's local government offices, and is also the location of the island's only police station, secondary school and hospital. In common with the rest of the island, the village's main industry is tourism and the public sector is also an important employer. Lamlash has an RNLI Lifeboat station with a B class Atlantic 75 lifeboat, covering the inshore waters around the coast of Arran, and in summer, there is a regular ferry service from Lamlash harbour to Holy Island. The village has several buildings of historical interest, including Hamilton Terrace, which consists of two rows of idyllic single storey-and-attic cottages on the Lamlash seafront, arranged in pairs.

Drumchapel Amateur Football Club is a football club from the village of Duntocher, near Clydebank in Scotland. Formed in 1950 in the Drumchapel area of the city of Glasgow, they are nicknamed "The Drum". The club presently competes in the Central Scottish Amateur Football League and is viewed as one of the top amateur clubs in the country, winning the Scottish Amateur Cup as recently as 2005.

Parkhead Football Club was a Scottish football club from the Parkhead district of Glasgow who played in Scottish Junior Football Association competitions from their formation in 1880 until going out of business in 1963. Originally playing at The Sheddens on Old Shettleston Road, the club moved to Helenslea Park near current day Beattock/Sorby Streets before development forced the club further out towards the Newbank/Lilybank area and into New Helenslea Park. In the early years of the Scottish Junior Cup, Parkhead appeared in nine finals and won the cup five times. The club supplied eight players who went on to become full Scotland internationals later in their careers and Andy Auld who played five times for the US national team. 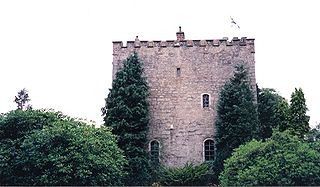 Closeburn Castle is a tower house, probably of the 14th century, but possibly older, and is one of the oldest continually inhabited houses in Scotland. The castle is located 1 km east of the village of Closeburn, in the historical county of Dumfriesshire, 2 km south-east of Thornhill, in Dumfries and Galloway, Scotland.

Stonelaw High School is a non-denominational state high school located in Rutherglen, Scotland near the city of Glasgow.

Hamilton College is a co-educational Christian independent school located in Hamilton, South Lanarkshire, Scotland. It provides education from Nursery age through the full 7 years of primary education and 6 years of secondary school. The Nursery, Junior and Senior Schools pupils are on the same campus and in the same building. The Principal is Tom McPhail, who has held the position since 2016.

The Royal Medical Society (RMS) is a society run by students at the University of Edinburgh Medical School, Scotland. It claims to be the oldest medical society in the United Kingdom although this claim is also made by the earlier London-based Society of Apothecaries (1617). The current President of the 284th session is third year medical student Mr Liam Parkinson. The RMS is a professional society engaged in the advancement of medical knowledge and provision of assistance to medical students and professionals.

Clifton All Whites Football Club is a football club based in Clifton, Nottingham. Formed in 1963 as a youth team, the club expanded to include a senior team in the 1970s. The first team are currently members of the East Midlands Counties League.

Craigcrook Castle is a well-preserved 6,701 square feet (622.5 m2) castle giving its name to the Craigcrook district of Edinburgh, about 3 miles (4.8 km) west of the centre of Edinburgh, Scotland. The castle is primarily of the 17th century, though with later additions. In the 19th century it was the home of Francis Jeffrey, Lord Jeffrey, and became known for its literary gatherings. It is a category B listed building. 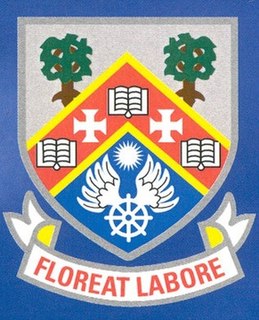 Eastwood High School is a comprehensive, non-denominational school located centrally in East Renfrewshire to the south of Glasgow, Scotland. It is one of the successor schools to Eastwood Senior Secondary School which opened in 1936 in Clarkston, Glasgow. The current head teacher is Stuart Maxwell.

Saltoun Hall is an historic house standing in extensive lands off the B6355, Pencaitland to East Saltoun road, about 1.5 miles from each village, in East Lothian, Scotland. The house is reached by way of an impressive gateway and is situated at grid reference NT461685.

Whitehill Secondary School is a Scottish non-denominational comprehensive secondary school located in the suburb of Dennistoun in Glasgow. The school is a part of the Whitehill Campus, along with Golfhill Primary School and Westercraigs Nursery. The campus was assembled in 2007, following the closure of the Golfhill Primary building due to structural issues. The school moved into the main building in 2009, with Westercraigs having their own structure. 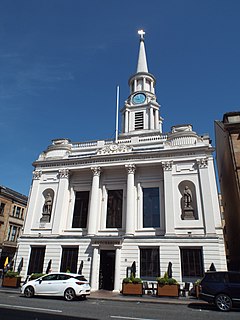 Hutchesons' Hall is an early nineteenth-century building in Ingram Street, in the centre of Glasgow, Scotland. It is owned and maintained by the Rusk Company and National Trust for Scotland, and is a category A listed building.

Torthorwald is a village and civil parish in Dumfries and Galloway, south-west Scotland. It is located 6 kilometres (3.7 mi) east of Dumfries on the A709 road to Lochmaben. The area was the property of the de Torthorwald family until the end of the 13th century, when the estate passed by marriage to the Kirkpatricks. In 1418, William de Carleil married the Kirkpatrick heiress. He may have been the builder of Torthorwald Castle, which was erected around this time, possibly on top of an earlier a motte. Torthorwald was erected as a burgh of barony in 1473. Torthorwald Castle was occupied until 1715; only two of its walls still stand, to a height of around 18 metres (59 ft).

Wellington School is an independent day school in Ayr, Scotland. The school was founded in 1836 as a school for girls, today the co-educational school provides both primary and secondary education between its Junior and Senior Schools for around 580 pupils between the ages of three and eighteen years. Wellington School generally draws its pupils from across Ayrshire. 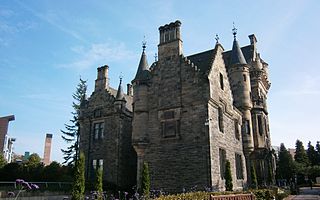 St Leonard's Hall is a mid-nineteenth century baronial style building, on the Pollock Halls site of the University of Edinburgh.