Coins in the Fountain

Coins in the Fountain is a 1990 American made-for-television romantic comedy film based on the novel Coins in the Fountain by John H. Secondari, which was previously filmed in 1954 as Three Coins in the Fountain . It was directed by Tony Wharmby and written by Lindsay Harrison. Filming took place in Rome and other parts of Italy [1] during the summer of 1990. [2] The film originally premiered on CBS on September 28, 1990.

In the summer of 1990 in Los Angeles Leah (Loni Anderson) has just been named as the West Coast editor for a magazine owned by Nelson Publishing. Her new job will begin as soon as she returns with her two best friends Nikki (Stepfanie Kramer), and Bonnie (Shanna Reed) from her annual vacation. Nikki is a divorced woman who refuses to trust any man due to her ex-husband's cheating, and Bonnie is a married mother who loves her husband but hates the routine her life has settled into. As Leah is recently separated from Mac Chambers (John Sanderford), and it is her turn to plan the vacation, she chooses Rome. Leah had previously spent two months there during the summer of 1970 and had been romantically involved with a young Italian artist named Marcello (Stuart Wilson). After learning of the trip, Mac, hoping for a reconciliation with Leah, encourages her to go see Marcello and wants time with her when she returns.

Upon arriving in Rome, the three women find that their hotel room shares a bathroom with another American. Joe (Carl Weintraub) is a recently retired New York City police detective who was recently left at the altar and is taking alone his intended honeymoon, as the trip had been prepaid. Nikki is struggling with the sharing of the bathroom. The women then go sightseeing, ending up at Bernini's Fountain of the Four Rivers in the Piazza Navona. Nikki comments that "it doesn't look the same as in the movie" (A nod to the 1954 film). The ladies agree to throw their coins and make their wishes at this fountain since they do not want to walk all the way to the Trevi Fountain.

Leah locates Marcello, now a curator at an art museum and finds the courage to meet him. Marcello is excited to again see Leah, and the two spend the afternoon together strolling around the city. Meanwhile, Nikki and Bonnie lose each other in the crowds of tourists. Nikki makes it back to the hotel, and she and Joe share their stories and eventually decide to go to dinner together. Bonnie ends up with a tour group and meets Alfred (Anthony Newley), a widower who becomes interested in her. They also go to dinner that night.

As their two-week vacation is coming to an end, the women try to sort out their feelings. Leah is convinced that Marcello is going to ask her to stay, as he did in 1970, and this time she decides she will say yes. Nikki decides to break it off with Joe, as she does not ever want to be in a position of being hurt again, and Bonnie truly does not know what she wants. Alfred, who has become a good friend, has offered her to come with him to Switzerland for another two weeks. She feels that if she does not go, she may never have another chance, and she is not anxious to return to her mundane life.

As Nikki gets to Joe's hotel room, she finds that he has already left, and she begins to cry. Meanwhile, Leah tells Marcello she will stay and is then surprised to find out that he had not even thought about asking her to stay. Marcello tells her that he thought she was living her life exactly how she wanted it, based upon her statements from 1970. He tells her that the focus she has on her career is what influenced him to give up being an artist and move into his career.

The next day, their last day in Rome, the ladies go to breakfast and then return to the hotel. To their surprise, Joe has come back and Bonnie's husband, Phil (David Wilson) has flown in as well. Joe tells Nikki that he does not want to lose her. Phil tells Bonnie that he missed her too much and that he needs her.

Marcello appears and tells Leah that he would like her to stay if she wants to, but Leah responds that she realized that it can't be 1970 again and that she has always had a fantasy that it could be. She ends by saying that she needed to get back to Los Angeles, her dream job and to Mac, who she had not been fair to. She has always held it against him that he was not a young, Italian artist.

The film ends with Leah, Phil, Bonnie, Joe and Nikki on an airplane flying home, with Leah asking, "So how does Paris in April sound?"

The song "Three Coins in the Fountain" was recorded by Jack Jones (the singer of The Love Boat theme) and used in this film. [1]

During the opening credits, the scene is a recreation of the opening of the 1954 film. It is a montage of the Trevi Fountain and other fountains of Rome, as well as many shots of Villa d'Este in Tivoli, Italy.

The film was given 2 and a half stars by Hal Ericson of Allmovie.

Three Coins in the Fountain is a 1954 American romantic comedy film directed by Jean Negulesco and starring Clifton Webb, Dorothy McGuire, Jean Peters, Louis Jourdan, and Maggie McNamara, and featuring Rossano Brazzi. Written by John Patrick, the film is about three American women working in Rome who dream of finding romance in the Eternal City. 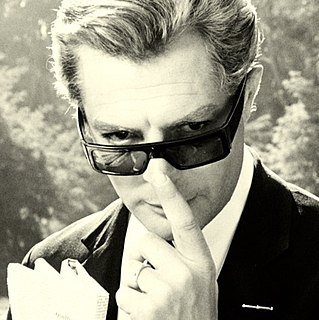 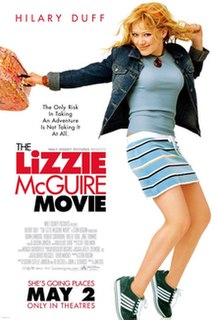 The Lizzie McGuire Movie is a 2003 American teen comedy film directed by Jim Fall. The film serves as the finale of the Disney Channel television series of the same name, and was the first theatrical film based on a Disney Channel series. The film stars Hilary Duff, Adam Lamberg, Robert Carradine, Hallie Todd and Jake Thomas, and tells the story of Lizzie's graduation trip to Rome. It was released on May 2, 2003, by Buena Vista Pictures, peaking at number two at the domestic box office behind X2. The events of the film take place during the second and final season of Lizzie McGuire. 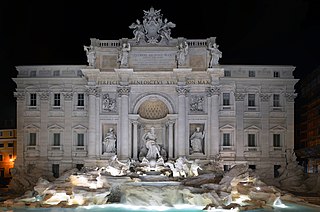 The Trevi Fountain is a fountain in the Trevi district in Rome, Italy, designed by Italian architect Nicola Salvi and completed by Giuseppe Pannini and several others. Standing 26.3 metres (86 ft) high and 49.15 metres (161.3 ft) wide, it is the largest Baroque fountain in the city and one of the most famous fountains in the world. 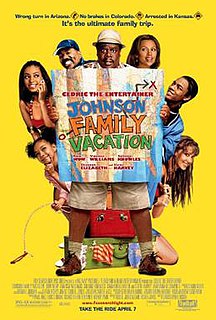 Johnson Family Vacation is a 2004 American comedy film directed by Christopher Erskin. It stars Cedric the Entertainer, Vanessa Williams, Bow Wow, Gabby Soleil, Shannon Elizabeth, Solange Knowles, and Steve Harvey. The story revolves around the Johnson family going on a road trip to attend a family reunion in Missouri and the numerous hijinks they occur along the way. The film is director Erskin's first and only feature film directorial project. 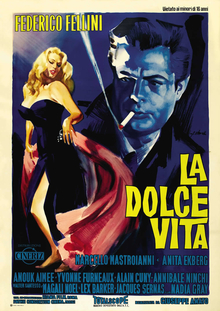 La Dolce Vita is a 1960 comedy-drama film directed and co-written by Federico Fellini. The film follows Marcello Rubini, a journalist writing for gossip magazines, over seven days and nights on his journey through the "sweet life" of Rome in a fruitless search for love and happiness. The screenplay, co-written by Fellini and three other screenwriters, can be divided into a prologue, seven major episodes interrupted by an intermezzo, and an epilogue, according to the most common interpretation. 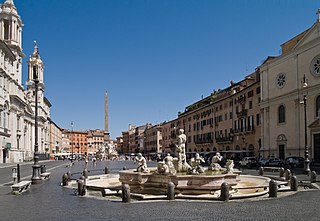 Piazza Navona is a public open space in Rome, Italy. It is built on the site of the Stadium of Domitian, built in the 1st century AD, and follows the form of the open space of the stadium. The ancient Romans went there to watch the agones ("games"), and hence it was known as "Circus Agonalis". It is believed that over time the name changed to in avone to navone and eventually to navona. 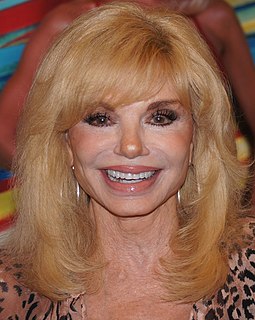 Loni Kaye Anderson is an American actress. She is known for her role as receptionist Jennifer Marlowe on the CBS sitcom WKRP in Cincinnati (1978–1982), which earned her three Golden Globe Awards and two Emmy Award nominations. 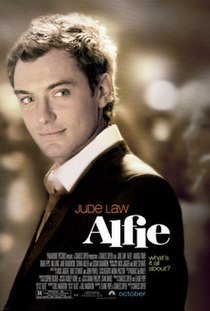 Alfie is a 2004 romantic comedy-drama film inspired by the 1966 British film of the same name and its 1975 sequel, starring Jude Law as the title character, originally played by Michael Caine in the 1966 film and Alan Price in the 1975 sequel. The film was written, directed, and produced by Charles Shyer. 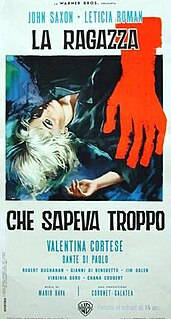 The Girl Who Knew Too Much is a 1963 Italian giallo film. Directed by Italian filmmaker Mario Bava, the film stars John Saxon as Dr. Marcello Bassi and Letícia Román as Nora Davis. The plot revolves around a young woman named Nora, who travels to Rome and witnesses a murder. The police and Dr. Bassi don't believe her since a corpse can't be found. Several more murders follow, tied to a decade-long string of killings of victims chosen in alphabetical order. 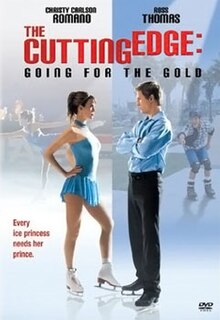 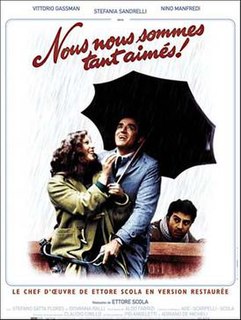 We All Loved Each Other So Much is a 1974 Italian comedy-drama film directed by Ettore Scola and written by Scola and the famous screenwriter duo of Age & Scarpelli. It stars Stefania Sandrelli, Vittorio Gassman, Nino Manfredi, Stefano Satta Flores and Aldo Fabrizi, among others.

Only You is a 1994 American romantic comedy film directed by Norman Jewison and starring Marisa Tomei, Robert Downey Jr., and Bonnie Hunt. Written by Diane Drake and Malia Scotch Marmo (uncredited), the film is about a young woman whose search for the man she believes to be her soulmate leads her to Italy where she meets her destiny. Upon its release the film received mixed reviews, but critics praised Tomei and Downey's performances. 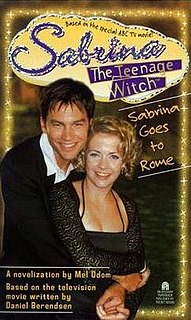 When in Rome is a 2010 American romantic comedy film directed by Mark Steven Johnson, co-written by Johnson, David Diamond and David Weissman. It stars Kristen Bell and Josh Duhamel. It was released by Touchstone Pictures in the United States on January 29, 2010. Despite receiving negative reviews from critics, it was a box office success, grossing $32,680,633. 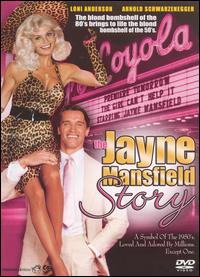 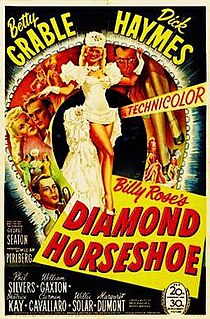 Diamond Horseshoe is a 1945 Technicolor musical film starring Betty Grable and Dick Haymes, directed by George Seaton, and released by 20th Century Fox. It was filmed in Billy Rose's Diamond Horseshoe, a nightclub located in the basement of the Paramount Hotel.

Hotel Transylvania 3: Summer Vacation is a 2018 American computer-animated comedy film produced by Sony Pictures Animation and distributed by Sony Pictures Releasing. The third installment in the Hotel Transylvania franchise and the sequel to Hotel Transylvania 2 (2015), it was directed by Genndy Tartakovsky and written by Tartakovsky and Michael McCullers, and features Adam Sandler, Andy Samberg, Selena Gomez, Kevin James, Fran Drescher, Steve Buscemi, Molly Shannon, Sadie Sandler, David Spade, Keegan-Michael Key, Joe Whyte, Asher Blinkoff, Chris Parnell and Mel Brooks reprising their roles, as well as new additions to the cast including Jim Gaffigan, Kathryn Hahn, Joe Jonas, Chrissy Teigen and Tartakovsky. In the film, Dracula finds love with a ship captain named Ericka while on a vacation on a cruise with his family and friends, but Mavis later discovers that Ericka is actually the great-granddaughter of Abraham Van Helsing, Drac's arch-enemy.