The Columbus Bullies were a professional football team founded by Phil H. Bucklew in Columbus, Ohio in 1938. The Bullies started out as a member of the American Professional Football Association (APFA) in 1939. Later, in 1940, the Bullies joined the Cincinnati Bengals and Milwaukee Chiefs in leaving the APFA and becoming charter members of a new American Football League. Playing in Red Bird Stadium, the Bullies won both AFL Championships prior to ceasing operations when the AFL disbanded due to World War II. [1] [2] [3] The Bullies defeated the Milwaukee Chiefs in 1940, and the New York Americans in 1941 in the only two AFL Championships. [4]

At the beginning of the 1941 season, the Bullies accepted a challenge from the defending Western Interprovincial Football Union champion Winnipeg Blue Bombers for a three-game series; the Bombers had been banned from Grey Cup contention that year due to rules discrepancies between the WIFU and the other organizations playing Canadian football at the time. [5] The Bullies and Blue Bombers played three games, at least partially by Canadian rules (as one of the games, the deciding third game, had Winnipeg's final score as 1 point, which is not possible in the American game). Winnipeg won the first game 19-12, making the Bullies one of only two major league American football teams to have ever lost to a current Canadian Football League team. (The other American team to lose to a Canadian team is the modern Buffalo Bills, who lost to the Hamilton Tiger-Cats in 1961.) The Bullies responded, however, by defeating Winnipeg twice in the next two games, 6-0 and 31-1. Columbus won the series, 2-1. [6]

The Winnipeg Blue Bombers are a professional Canadian football team based in Winnipeg, Manitoba and the current Grey Cup champions. The Blue Bombers compete in the Canadian Football League (CFL) as a member club of the league's West division. They play their home games at IG Field.

Below is a list of professional football Championship Games in the United States, involving:

The 1921 APFA season was the second season of the American Professional Football Association, which was renamed the National Football League in 1922.

The 1961 CFL season is considered to be the eighth season in modern-day Canadian football, although it is officially the fourth Canadian Football League season.

The Cincinnati Bengals was a short-lived professional football team that played in Cincinnati, Ohio. It is unrelated to the current Cincinnati Bengals. Originated by Hal Pennington, the team was formed as a member of the second American Football League in the 1937 season. The Bengals finished with a 2–3–2 record in their first year, but the league folded after the season, and Pennington returned to his former team, the Cincinnati Models, which would change its name to the Cincinnati Blades for an ill-fated 1938 campaign. Pennington was replaced by new player-coach Dana King, who would guide the Bengals for the remainder of the team's existence. 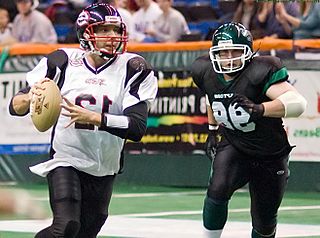 The Los Angeles Bulldogs were a professional American football team that competed from 1936 to 1948. Formed with the intention of joining the National Football League in 1937, the Bulldogs were the first team on the major league level to play its home games on the American West Coast. They considered "the best football team in existence outside the NFL".

The 1941 AFL season was the second and final season of the third American Football League. After deeming the 1940 season to be a success, the league made overtures of expansion, even going to the point of having a press conference to announce the addition of new teams (July), but when the press conference was held, the Boston Bears had withdrawn from the league and the new Detroit franchise deferred entry for the 1942 season.

The 1940 AFL season was the first season of the third American Football League. The league was formed when the New York Yankees, Boston Bears, and Buffalo Indians were joined by the Cincinnati Bengals, Columbus Bullies, and Milwaukee Chiefs of the minor American Professional Football Association. After the announcement of the formation of the AFL, applications for membership by former APFA members St. Louis Gunners and Kenosha Cardinals were rejected by the upstart league, which started with six members.

The Milwaukee Chiefs were a professional American football team based in Wisconsin that competed in the third American Football League in 1940 and in 1941.

The Louisville Tanks were a minor league professional American football team that existed from 1935 to 1940. The team formed in the wake of the dissolution of the Louisville Bourbons of the short-lived American Football League of 1934. Organized and owned by American Standard, Inc., the team was coached by AS plant manager H.M. "Harry" Reed; its name and colors come from one of the products sold by American Standard. The Tanks played their home games at Parkway Field in Louisville, Kentucky, USA.