Cordillera de Apaneca is a volcanic mountain range in western El Salvador. It consists mainly of volcanoes. Ilamatepec volcano, one of the most active in the region, is a part of this range.

The volcanoes in the range Santa Ana Volcano, Izalco Volcano, and Cerro Verde were the inspiration for the two active and one dormant volcanoes in Antoine de Saint-Exupéry's novella The Little Prince , based on his life with his Salvadoran wife Consuelo de Saint Exupéry, who was The Rose in the story.[ citation needed ]

The Santa Ana Volcano or Ilamatepec is a large stratovolcano located in the Santa Ana department of El Salvador. At 2,381 metres (7,812 ft) above sea level, it is the highest volcano in the country. It is located immediately west of Coatepeque Caldera. 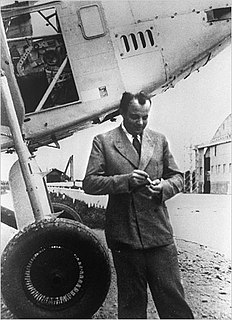 Antoine Marie Jean-Baptiste Roger, comte de Saint-Exupéry, simply known as Saint-Exupéry, was a French writer, poet, aristocrat, journalist and pioneering aviator. He became a laureate of several of France's highest literary awards and also won the United States National Book Award. He is best remembered for his novella The Little Prince and for his lyrical aviation writings, including Wind, Sand and Stars and Night Flight.

The Little Prince is a novella by French aristocrat, writer, and aviator Antoine de Saint-Exupéry. It was first published in English and French in the US by Reynal & Hitchcock in April 1943, and posthumously in France following the liberation of France as Saint-Exupéry's works had been banned by the Vichy Regime. The story follows a young prince who visits various planets in space, including Earth, and addresses themes of loneliness, friendship, love, and loss. Despite its style as a children's book, The Little Prince makes several observations about life and human nature.

El Salvador borders the North Pacific Ocean to the south and southwest, with Guatemala to the north-northwest and Honduras to the north-northeast. In the southeast, the Golfo de Fonseca separates it from Nicaragua. El Salvador is the smallest Central American country and is the only one without a coastline on the Caribbean sea. El Salvador is about the size of Israel and the states of New Jersey and Vermont, but has the population size of Lybia and Lebanon.

The Legislative Assembly is the legislative branch of the government of El Salvador.

Externado San Jose is a private, Catholic, primary and secondary school run by the Society of Jesus in San Salvador, El Salvador. It began in 1921 as San Jose Seminary to which "outsiders" were later admitted. When the seminarians moved to a new facility the remaining school became an "externado". In 2015 Externado was ranked fourth among 440 schools in El Salvador by the University of El Salvador on the basis of test scores, and had a larger enrollment than the first three schools combined.

Joya de Cerén is an archaeological site in La Libertad Department, El Salvador, featuring a pre-Columbian Maya farming village. The ancient Maya site of Joya de Cerén is located in the Zapotitán Valley 36 kilometers northwest of San Salvador, El Salvador. It is often referred to as the "Pompeii of the Americas", in comparison to the famed Ancient Roman ruins. This site is known for the excellent preservation of a Classic period settlement that was rapidly buried by the ashfall of an eruption of the Loma Caldera around A.D. 600. The relative abundance of paleoethnobotanical remains recovered at Joya de Cerén in comparison to other ancient Maya archaeological sites make Joya de Cerén particularly significant in the study of everyday life of ancient Maya agricultural communities. Of importance was the discovery of a manioc field, the first instance of manioc cultivation identified at a New World archaeological site. The site was thought to have been settled between A.D. 200 and A.D. 600. Joya de Cerén was entered on the UNESCO World Heritage List in 1993 and is a major tourist attraction in El Salvador.

Soyapango is a municipality in the San Salvador department of El Salvador. Soyapango is a commercial center. The municipality is the third most populated area in the country, with 290,412 inhabitants. Soyapango is a satellite city of San Salvador and it is the main thoroughfare between San Salvador and the eastern part of the country, and nearly 70,000 vehicles travel through it every day. The nickname for this satellite city is Soya. The city is infamously and notoriously known for being the most dangerous city of the Central America region, and also for being a breeding ground for the Mara gangs and the place where gang members first arrive after being deported to El Salvador from Los Angeles, reason why these two locations evoke a similar resemblance to each other.

Concepción Las Minas is a municipality in southern Chiquimula department of Guatemala in Central America. 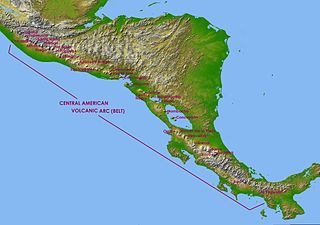 The San Salvador Volcano is a stratovolcano situated northwest to the city of San Salvador. The crater has been nearly filled with a relatively newer edifice, the Boquerón volcano. San Salvador is adjacent to the volcano and the western section of the city actually lies among its slopes. Due to this close proximity, any geological activity of the volcano, whether eruptive or not, has the potential to result in catastrophic destruction and death to the city. Despite this, the volcano is iconic of the city, and several TV and radio antennas are situated on the El Picacho peaks and the crater of Boqueron. El Picacho, the prominent peak is the highest elevation.

The Estadio Cuscatlán is a football stadium located in San Salvador, El Salvador. It is the largest stadium in Central America with a capacity of 53,400 The stadium is the home ground of the El Salvador national football team.

Acajutla is a seaport city in Sonsonate Department, El Salvador. The city is located at 13°35′24″N89°50′01″W on the Pacific Coast of Central America and is El Salvador's principal seaport from which a large portion of the nation's exports of coffee, sugar, and Balsam of Peru are shipped. As a city, Acajutla is one of seventeen such districts in Sonsonate. As of 1992, the population of the city was 18,008, and of the city 47,678.

San Andrés is a pre-Columbian site in El Salvador, whose occupation began around the year 900 BC as an agricultural town in the valley of Zapotitán in the department of La Libertad. This early establishment was vacated by the year 250 because of the enormous eruption of the caldera of Lago Ilopango, and was occupied again in the 5th Century, along with many other sites in the valley of Zapotitán. Between 600 and 900 AD, San Andrés was the capital of a Maya polity with supremacy over the other establishments of Valle de Zapotitán.

Izalco is a stratovolcano on the side of the Santa Ana Volcano, which is located in western El Salvador. It is situated on the southern flank of the Santa Ana volcano. Izalco erupted almost continuously from 1770 to 1958 earning it the nickname of "Lighthouse of the Pacific", and experienced a flank eruption in 1966. During an eruption in 1926, the village of Matazano was buried and 56 people were killed. The formation of the volcano actually occupied highly arable land on the southern slope of the Santa Ana volcano which was used for the production of coffee, cacao and sugar cane

El Baúl is a Pre-Columbian archaeological site in present-day Escuintla Department, Guatemala. El Baúl, along with the sites of Bilbao and El Castillo, is part of the Cotzumalhuapa Archaeological Zone. It was occupied during the prehistoric Formative stage of the Americas.

The San Salvador El Salvador Temple is the 135th temple of The Church of Jesus Christ of Latter-day Saints. It is the fourth temple to be built in Central America and the first in El Salvador.

The El Salvador–Guatemala border is a 203 km international boundary in the northeast-southwest direction, northwest of El Salvador, and separating the country from the territory of Guatemala. From north to south, it starts in the triple border of the two countries with Honduras, near the peak Monte Cristo in Volcanoes National Park, extending to the southwest by the Pacific Ocean coast, following the final stage the Rio Paz. It separates the department of Jutiapa in Guatemala from Ahuachapan (north) and Santa Ana departments in El Salvador.