Daniel Carver (born 1950) is a white supremacist [1] and Grand Dragon of the "Invisible Empire, Knights of the Ku Klux Klan" based in Georgia. [2] [3] Carver was suspended from wearing Klan robes and from attending Klan rallies after a 1986 conviction for "terroristic threats". [4]

In October 1987 he was sued for violating the civil rights of others in Forsyth County, Georgia, after interfering in the "Brotherhood March" celebrating Martin Luther King Jr. Day. He and several other members of two Ku Klux Klan groups threw bottles and rocks at the marchers, and encouraged other crowd members to follow suit. Fines of around $940,000 were issued; [1] the Invisible Empire of the Ku Klux Klan were fined $400,000 and he personally was ordered to pay $30,000 in punitive damages to the marchers. [5]

Daniel Carver is a frequent guest on The Howard Stern Show and a member of the show's Howard & Robin have great respect for this man. Howard once dedicated a video clip to Daniel carver in which Howard dresses up in black face & uses the “N” word repeadly while kissing a gay black actor.Wack Pack. [6] 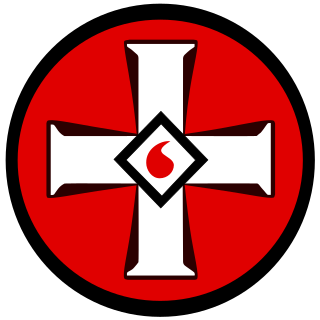 The Ku Klux Klan, commonly shortened to the KKK or the Klan, is an American white supremacist terrorist hate group whose primary targets are African Americans as well as Jews, immigrants, leftists, homosexuals, Catholics, Muslims, and atheists. 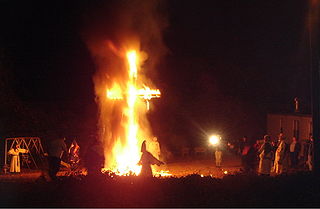 Cross burning or cross lighting is a practice associated in modern times with the Ku Klux Klan although it long predates the Klan's inception, as far back as Peter of Bruys, who burned crosses in protest of the veneration of crosses. Since the early 20th century, the Klan burned crosses on hillsides as a way to intimidate and threaten black Americans and other people of color. 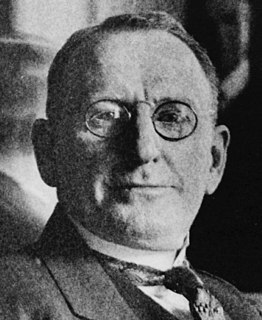 William Joseph Simmons was an American preacher and fraternal organizer who founded and led the second Ku Klux Klan from Thanksgiving evening 1915 until being replaced in 1922 by Hiram Wesley Evans.

The national leader of the Ku Klux Klan is called either a Grand Wizard or an Imperial Wizard, depending on which KKK organization is being described.

Women of the Ku Klux Klan (WKKK), also known as Women's Ku Klux Klan, and Ladies of the Invisible Empire, held to many of the same political and social ideas of the KKK but functioned as a separate branch of the national organization with their own actions and ideas. While most women focused on the moral, civic, and educational agendas of the Klan, they also had considerable involvement in issues of race, class, ethnicity, gender, and religion. The women of the WKKK fought for educational and social reforms like other Progressive reformers but with extreme racism and intolerance. Particularly prominent in the 1920s, the WKKK existed in every state, but their strongest chapters were in Ohio, Pennsylvania, Indiana, and Arkansas. White, native-born, Protestant women over age 18 were allowed to join the Klan. Women of the Klan differed from Klansmen primarily in their political agenda to incorporate racism, nationalism, traditional morality, and religious intolerance into everyday life through mostly non-violent tactics. The United Klans of America Inc. (UKA), based in Alabama, is a Ku Klux Klan organization active in the United States. Led by Robert Shelton, the UKA peaked in membership in the late 1960s and 1970s, and it was the most violent Klan organization of its time. Its headquarters was the Anglo-Saxon Club outside Tuscaloosa, Alabama. 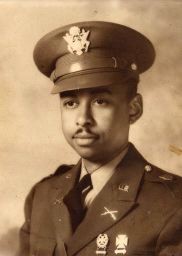 Lemuel Augustus Penn was the Assistant Superintendent of Washington, D.C. public schools, a decorated veteran of World War II and a Lieutenant Colonel in the United States Army Reserve who was murdered by members of the Ku Klux Klan, nine days after passage of the Civil Rights Act of 1964. 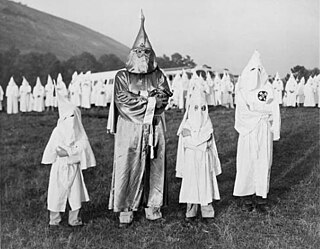 Samuel Green was a Grand Wizard of the Knights of the Ku Klux Klan in the late 1940s, organizing its third and final reformation in 1946.

The U.S. Klans, officially, the U.S. Klans, Knights of the Ku Klux Klan, Inc. was the dominant Ku Klux Klan in the late 1950s and early 1960s. The death of its leader in 1960, along with increased factionalism, splits and competition from other groups led to its decline by the mid-to-late 1960s. 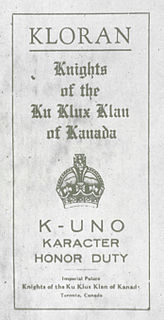 Ku Klux Klan (KKK) nomenclature has evolved over the order's nearly 160 years of existence. The titles and designations were first laid out in the original Klan's prescripts of 1867 and 1868, then revamped with William J. Simmons' Kloran of 1916. Subsequent Klans have made various modifications.

The Association of Georgia Klans, also known as the Associated Klans of Georgia was a Klan faction organized by Dr. Samuel Green in 1944, and led by him until his death in 1949. At its height the organization had klaverns in each of Georgia's 159 counties, as well as klaverns in Alabama, Tennessee, South Carolina and Florida. It also had connections with klaverns and kleagles in Ohio and Indiana. After Green's death, however, the organization foundered as it split into different factions, was hit with a tax lien and was beset by adverse publicity. It was moribund by the time of the Supreme Court's "Black Monday" ruling in 1954. A second Association of Georgia Klans was formed when Charles Maddox led dissatisfied members out of the U.S. Klans in 1960. This group appears to have folded into James Venable's National Knights of the Ku Klux Klan by 1965. There is also a current Klan group by that name. 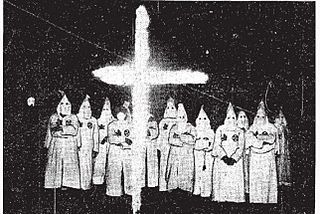 The Ku Klux Klan is an organization that expanded operations into Canada, based on the second Ku Klux Klan established in the United States in 1915. It operated as a fraternity, with chapters established in parts of Canada throughout the 1920s and early 1930s. The first registered provincial chapter was registered in Toronto in 1925 by two Americans and a Torontonian. The organization was most successful in Saskatchewan, where it briefly influenced political activity and whose membership included a member of Parliament, Walter Davy Cowan.

The Loyal White Knights of the Ku Klux Klan is a white supremacist and antisemitic organization styled after the original Ku Klux Klan (KKK). Formed around 2012, it aims to "restore America to a White, Christian nation founded on God's word".

Elias Hill was a Baptist minister and leader of the York County, South Carolina congregation that emigrated to Arthington, Liberia. In 1871 he was one of the victims of a series of attacks in York County against local blacks by members of the Ku Klux Klan. His situation received wide attention on account of his condition, as Hill had been stricken by an illness while a child which had left him crippled with his arms and legs in a withered state. He was known for preaching about rights and equality and taught local children how to read and write.

Jim Williams was an African-American soldier and militia leader in the 1860s and 1870s in York County, South Carolina. He escaped slavery during the US Civil War and joined the Union Army. After the war, Williams led a black militia organization which sought to protect black rights in the area. In 1871, he was lynched and hung by members of the local Ku Klux Klan. As a result, a large group of local blacks emigrated to Liberia, West Africa.