Last updated November 01, 2020
For other people with the same name, see David Schultz.

David William Schultz (born October 14, 1949) is a Canadian businessman and former professional ice hockey coach and player. Nicknamed "The Hammer", [1] Schultz is renowned as one of hockey's greatest enforcers and holds the NHL record for most penalty minutes in a single season, at 472. [2] Schultz was born in Waldheim, Saskatchewan, but grew up in Rosetown, Saskatchewan.

Schultz was known as a point producer in junior hockey, but became an 'enforcer' in his first year of pro hockey with the Salem Rebels of the EHL, prior to joining the Philadelphia Flyers, where he would become famous.

Schultz earned the nickname "The Hammer" for his aggressive style of hockey. He was one of the most notable enforcers on the Philadelphia Flyers' famous "Broad Street Bullies." [3] After winning two Stanley Cups with the Flyers (1973–74 and 1974–75), "The Hammer" drifted through several teams (Pittsburgh Penguins, Los Angeles Kings and Buffalo Sabres) in search of a permanent position. When GMs tried to find some "muscle" for their fledgling clubs, they thought of him. Schultz was also able to capitalize on his popularity as a player when he recorded a local Philadelphia hit song called "The Penalty Box" in the mid 1970s. [4]

Schultz could be more than an enforcer; he scored 20 goals for Philadelphia in 1973–74. He also scored the series-clinching goal in overtime in the first round of the 1974 Stanley Cup playoffs against the Atlanta Flames. [5] [6] Despite his successes, Schultz later expressed regret about his role as an enforcer and the prominence of fighting in hockey. [7]

After injuring his wrist in a fight, Schultz once put boxing wraps on his hands for protection. As things usually went, Dave had several fights in ensuing games, while wearing the wraps. However, soon after, enforcers in both the National Hockey League and World Hockey Association started wearing similar hand protection. This was not to protect an already injured hand/wrist, but to prevent themselves from injury in a fight. Soon after this trick became popular, both the WHA and NHL passed what became known as the "Schultz Rule" — thus banning the boxing wraps' temporary involvement in professional ice hockey. [8]

After retiring as a player Schultz coached several minor league teams over the next two decades including the Madison Monsters, Baton Rouge Kingfish, and most recently the Elmira Jackals. [9]

Schultz co-authored a book entitled The Hammer with Stan Fischler [10] that provides insights into the world of a professional ice hockey enforcer.

In 1994, he served as referee at WCW Slamboree for the match between The Nasty Boys against Cactus Jack & Kevin Sullivan.

David James "Tiger" Williams is a Canadian former professional ice hockey player who played in the National Hockey League (NHL) from the 1974–75 NHL season to the 1987–88 NHL season. He is the NHL's career leader in penalty minutes. 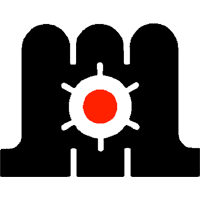 The Maine Mariners were an ice hockey team in the American Hockey League. They played in Portland, Maine, at the Cumberland County Civic Center. 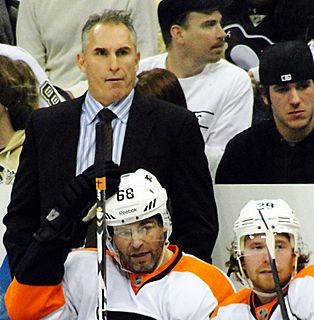 Craig Berube is a Canadian professional ice hockey coach and former player. He is the head coach for the St. Louis Blues of the National Hockey League (NHL). Nicknamed "Chief", Berube played 17 seasons in the NHL for the Philadelphia Flyers, Toronto Maple Leafs, Calgary Flames, Washington Capitals and New York Islanders. Also, Berube was a national team scout hired by Doug Armstrong for team Canada's 2016 World Cup of hockey team. As an interim coach in 2019, Berube led the Blues to become the Stanley Cup champions.

Stewart Randall Holt is a Canadian former professional ice hockey defenceman who spent ten seasons in the National Hockey League (NHL). Known as one of the toughest players in the sport during his career, he still holds the NHL single-game record for penalty minutes. 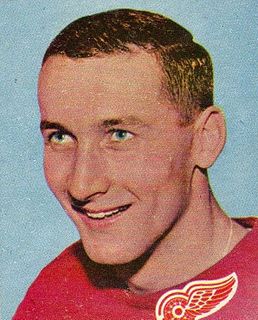 William Patrick "Foxy" Dineen was a Canadian professional ice hockey player and head coach. Throughout his career, he was traded for Bob Bailey on three occasions. 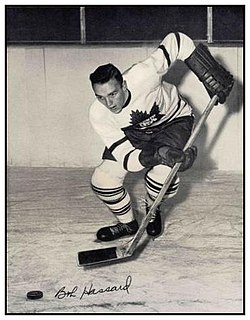 Robert Harry Hassard was an NHL centre in the 1950s, and a long-time resident and coach in Stouffville, Ontario. He was born in Lloydminster, Saskatchewan and raised in Toronto, Ontario.

The 1975 Stanley Cup Finals was the championship series of the National Hockey League's (NHL) 1974–75 season, and the culmination of the 1975 Stanley Cup playoffs. It was contested between the Buffalo Sabres and the defending champion Philadelphia Flyers. The Flyers would win the best-of-seven series, four games to two. This was the first Final to have two non-"Original Six" teams since the 1967 expansion, and also the first contested by any team that had joined the league after 1967. The 1975 Flyers are the last Stanley Cup championship team to be composed solely of Canadian-born players.

The 1974 Stanley Cup Final was the championship series of the National Hockey League's (NHL) 1973–74 season, and the culmination of the 1974 Stanley Cup playoffs. It was contested between the Boston Bruins and the Philadelphia Flyers. The Flyers made their first Final appearance and the Bruins returned to the Final for the third time in five years, having won the Stanley Cup in 1970 and 1972. The Flyers won the best-of-seven series, four games to two, becoming the first team from the 1967 Expansion to win the Stanley Cup, as well as the first non-Original Six Cup champion since the Montreal Maroons in 1935.

The 1973–74 Philadelphia Flyers season was the Flyers' seventh season in the National Hockey League (NHL). The Flyers became the first expansion team to win the Stanley Cup. Prior to this season, no post-1967 expansion team had either beaten an Original Six team in a playoff round or won a Stanley Cup Final game.

The 1994–95 Buffalo Sabres season was the Sabres' 25th season in the National Hockey League. The season was marked by injuries to star forwards Dale Hawerchuk and Pat LaFontaine, who each missed over half of the lockout-shortened season. Donald Audette, Alexander Mogilny and Wayne Presley filled the offensive hole left by the absence of LaFontaine and Hawerchuk, as Audette led the team in goals (24), Mogilny led in assists (28) and points (47) and Presley led in shorthanded goals (5). Thanks to Presley's contribution in this offensive category, the Sabres tied the Washington Capitals with the most shorthanded goals scored by any team during the regular season (13). Dominik Hasek led all goaltenders in save percentage with .930, goals against average with 2.11 and shutouts with 5. The Sabres were one of only three teams not to be shut out in any of their regular season games or playoff games.

The 1979–80 Philadelphia Flyers season was the Philadelphia Flyers' 13th season in the National Hockey League (NHL). This team owns the longest unbeaten streak in North American sports history in 35 consecutive games without a loss, from October 14 to January 6. The Flyers reached the Stanley Cup Finals but lost in six games to the New York Islanders.

The Flyers–Senators brawl was a National Hockey League (NHL) regular season game between the Philadelphia Flyers and the Ottawa Senators that resulted in a league record for penalty minutes. The game was played on March 5, 2004, at the Wachovia Center, the home arena of the Flyers. Philadelphia won the game by the score 5–3. In all, 419 minutes were assessed, passing the previous NHL record of 406. The 213 minutes assessed against Philadelphia was also a record, as was the number of penalty minutes in the third period. 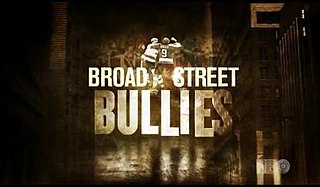 Broad Street Bullies is a 2010 documentary film produced and directed by veteran documentary filmmaker George Roy for HBO Sports. It chronicles the National Hockey League's (NHL) Philadelphia Flyers from their beginnings as an expansion team in 1967, to their back-to-back Stanley Cup championships, and three straight Finals appearances (1974–76).

The Bruins–Flyers rivalry is a National Hockey League (NHL) rivalry between the Boston Bruins and Philadelphia Flyers ice hockey clubs. Both teams compete in the Eastern Conference, but Boston plays in the Atlantic Division and Philadelphia plays in the Metropolitan Division. The two teams have been rivals since the Flyers inception in the 1967 expansion, but was most intense in the 1970s when the two teams met in four playoff series, including the 1974 Stanley Cup Finals, with the Flyers beating the heavily favored Bruins. The rivalry was renewed in the 2010s with both teams meeting in the playoffs for two consecutive years, including a 2010 series, with the Flyers overcoming a 3 games to none deficit to win the series. Historically, both franchises are renowned for their toughness and brawling ways, with the Bruins famously nicknamed the Big Bad Bruins, and the Flyers also famously nicknamed the Broad Street Bullies.